Plenty of laughs in WrestleCrap’s Lists

Over the years, wrestling fans have been subjected to some pretty lousy ideas. Characters, matches, or moments that have been so god-awful that you’ve sat there amazed that something that stupid could ever have been conceived of, much less executed on-screen. A new book, The WrestleCrap Book of Lists celebrates the worst of professional wrestling in the best possible way. 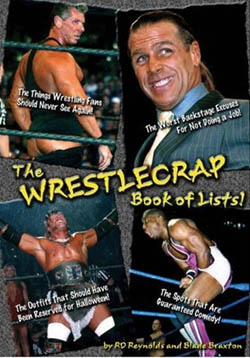 Co-author RD Reynolds (Randy Baer by day) is perhaps the foremost authority on the worst of professional wrestling, having founded WrestleCrap.com in 2001 (the other co-author Blade Braxton is a longtime contributor to the site). For anyone who is unfamiliar with the site, WrestleCrap is dedicated to documenting the very worst of professional wrestling. It’s like an encyclopedia of wrestling blunders — an ensucklopedia, if you will. Each inductee is “honoured” through a tongue-in-cheek description that is usually highlighted by pictures and the occasional sound or motion capture clips that reinforce how crappy the item actually was. What’s really impressive is in the amount of material that the site has — though maybe that’s just sad commentary about how much crap the major companies have put forth in the past 25 years or so.

Lists, the third book in the WrestleCrap series, builds on the website’s theme by adding a new twist. The book categorizes WrestleCrap entries into common themes — i.e. the titular lists. Every list entry is given a detailed explanation, including the historical context, the participants involved, and most importantly, the crap factor — what specifically about that item warrants entry into wrestling’s hall of shame.

Reynolds and Braxton have a truly biting wit that makes the book really entertaining. It’s not everyone that can come up with list ideas like the Six Best Mullets or Wrestling’s Nine Worst Drag Queens, much less make them funny beyond just the heading. But Lists accomplishes just that. And those are just two of the over 80 lists included in the book. A wide variety of topics are included, with nothing at all left sacred. There’s nothing too campy or illogical or lame or just plain stupid to be used as comedic fodder by the authors — everything is a target, the crappier the better. A lot of that comes from WWE’s creative vaults, but WCW, ECW, TNA and other companies aren’t spared either. All of their biggest follies are laid out for the world to see and to mock one more time.

Because how can you not mock things like Snitsky’s foot fetish, or Ernest Miller’s Cat-Bo martial arts technique, or TNA’s King of the Mountain match, or Tony Schiavone? As long as it’s all in good fun — and Lists certainly keeps it in that vein — then what’s the harm? It’s not like Reynolds and Braxton have a hidden agenda or want to suggest that all wrestling is crappy. On the contrary, they make it clear from the outset that they are huge wrestling fans who appreciate the product, warts and all. It’s that fondness that allows them to laugh at its foibles, or in this case, list them, and still come back each and every week. It’s that kind of fan that will really appreciate The WrestleCrap Book of Lists.

Bottom line: The WrestleCrap Book of Lists is a comprehensive, lighthearted look at the worst the business has to offer. At over 350 pages, including a 16-page colour centre spread, with laugh-out-loud spots on every page, it’s definitely a worthwhile purchase. In other words: it’s not crap.