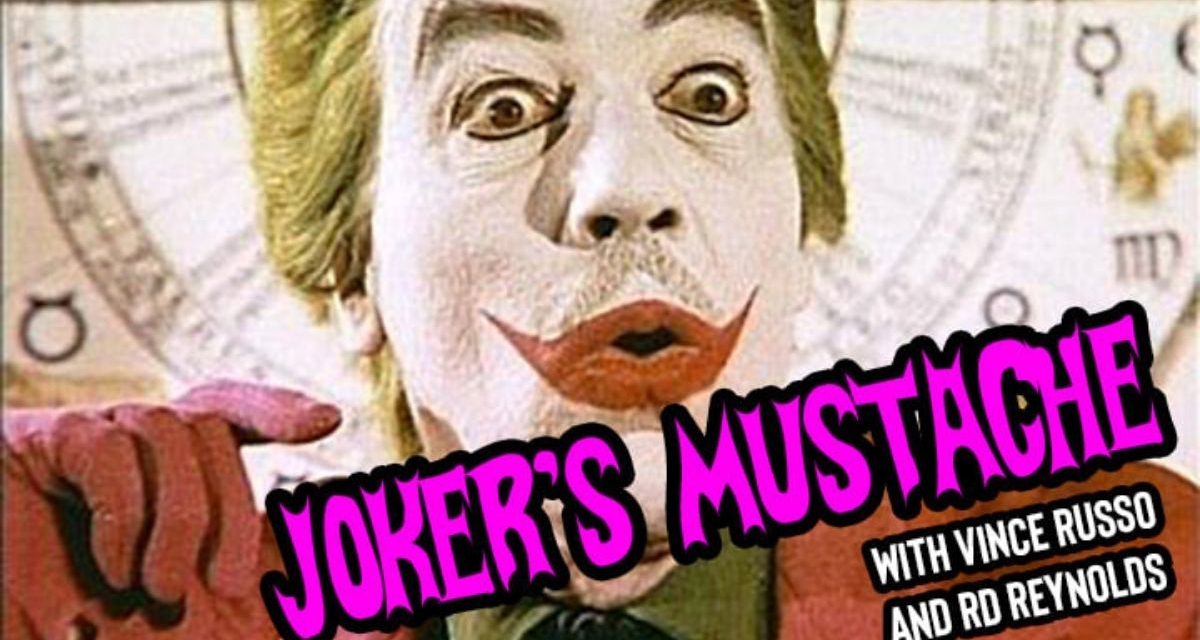 Coming in August is The Joker’s Mustache, a podcast which will explore the wonderful world of the ABC show Batman, which ran January 12, 1966 to March 14, 1968.

Russo, who has distanced himself from wrestling over the past couple of years, is working with Reynolds, who many will know from his WrestleCrap website, books and podcast.

“I discovered Russo loved Batman during an interview we did with him on my old show, WrestleCrap Radio. I told my co-host Blade Braxton (RIP) prior to the show, ‘We’ve got Russo on… do not ask him a single question about wrestling.’ And we didn’t,” Reynolds recalled to SlamWreslting.net. “We wound up talking KISS, breakfast cereals, you name it. I think he found that refreshing as he was probably expecting us to scream at him for an hour about putting Judy Bagwell on a forklift.”

The incredible popularity of Batman in 1966 came up during the discussion, and they realized their common bond.

“I remember watching the very first episode of Batman,” recalled Russo. “I was five years old, and I loved it. And I fell in love with it. And as I got older, and you know, I’m a writer by craft, I appreciated it even more. In my adult years, I got to actually meet Adam West and talk to him about the process a little bit.”

Russo has been podcasting himself for almost a decade (Vince Russo’s The Brand), and loves the medium — so much so that he recently bought The RELM Network, his long-time home.

“For about the last two years, I’ve definitely been making a transition from wrestling for a couple of reasons. Number one, I think it’s a business that’s dying, and I think it’s been dying for a long time. And number two, I do not enjoy it at all any more,” said Russo. “I know a lot of people know me from wrestling, so I didn’t want it to be like a, you know, a cultural shock, where all of a sudden, I’m doing a lot of shows that are non-wrestling. But I really, the last couple of years, man, I’ve really been waning myself off of wrestling. And now that I’ve just purchased my own podcasting platform, I’m going to be doing so many non-wrestling shows.”

So The Joker’s Mustache is an addition to the network. “My goal is I want to have 30 different shows within the next couple of years, and I mean, none of them are going to be wrestling related,” said Russo.

Reynolds recalled that Russo reached out with the idea. “As he and I get along great (again, we don’t talk wrestling as a rule!), I said that sounded fun,” explained Reynolds via email. “We bounced ideas of each other and it basically came down to doing a weekly show where we go through episode by episode and break things down in a manner I’m sure will be comical. I’m not afraid to share my opinions and believe me, Russo isn’t either. Bro.”

The laughs are expected, said Russo. “I think it’ll be very, very entertaining. As I’ve gotten to know RD over the years, this is a guy that is just absolutely hysterical. He’s got such a great sense of humor. He always makes me laugh. So I just think we’re gonna have a fantastic time doing it together.”

There’s lots to debate too — “Russo’s a good guy, even if he’s incorrect in thinking that Yvonne Craig is hotter than Julie Newmar,” noted Reynolds, referring to actresses who played Batgirl and Catwoman, respectively.

The enduring appeal of the 1960s TV Batman is easy for Reynolds to explain: “I think the Adam West series has lived so long because it was so weird, so quirky, and most importantly, didn’t take itself seriously. It was all about having fun. People see the Joker surfing on a blatant green screen and… I mean, that’s just funny. You look at it slack jawed and laugh. West played it so absurdly straight… it was just brilliant. He was a precursor in so many ways to another great, Leslie Nielsen, in Airplane and Naked Gun. Same kinda thing. The other actors went completely over the top, with not only Julie Newmar being fantastic chewing up scenery, but Burgess Meredith, Vincent Price, and Frank Gorshin, among others doing the same. And naturally Cesar Romero, who was so fantastic that he convinced them to let him keep his push broom… hence the name of the show, Joker’s Mustache!”

The aim is launch in early August, maybe even August 1.