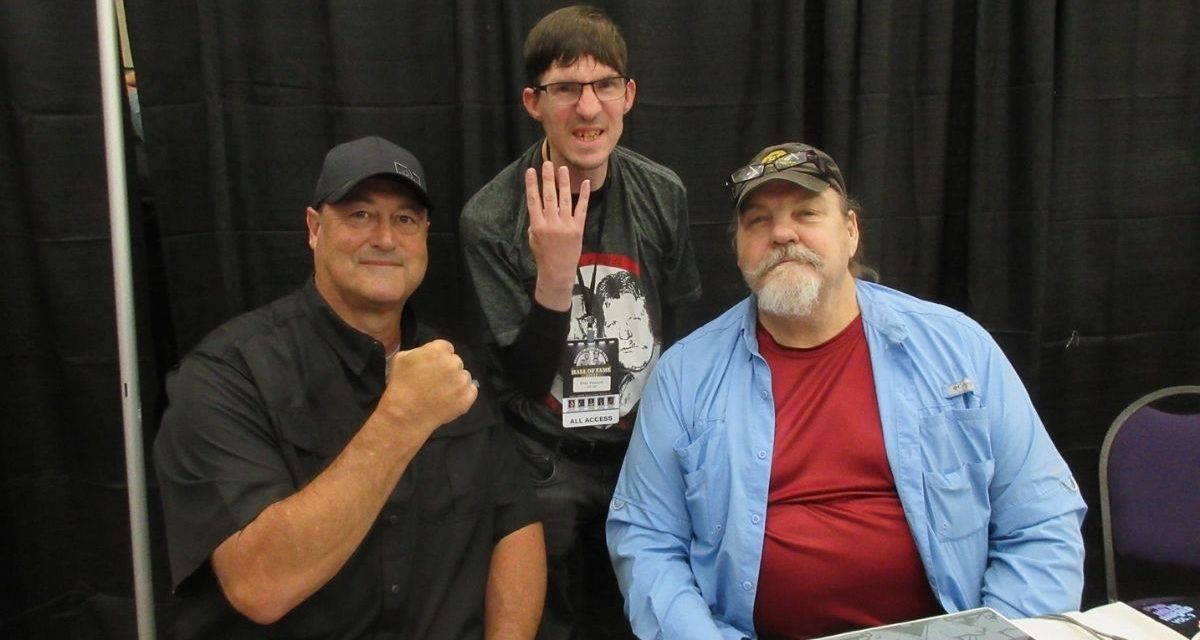 By BRIAN WESTCOTT – For SlamWrestling.net

WATERLOO, IOWA — I attended my very first George Tragos/Lou Thesz Professional Wrestling Hall of Fame induction weekend in Waterloo, Iowa.  It was an incredible experience and I will definitely make this an annual event.

Wednesday, July 14 was a day of travel for me as I flew from Boise, Idaho, to Dallas/Fort Worth, Texas, to Chicago, Illinois to finally, despite tornado warnings, Waterloo, Iowa.

Joe Malenko was on the same flight to Waterloo as myself.  He noticed the book I was reading which happened to be the latest by Dan Murphy. 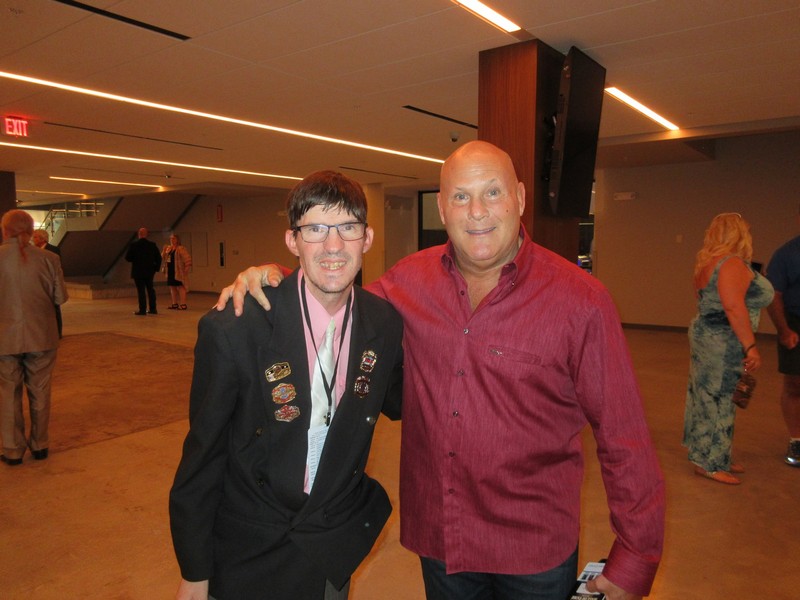 I had dinner with fellow CAC members Dennis Harrington and Gloria Lovell.  It was so fun reuniting with them and catching up on our lives. 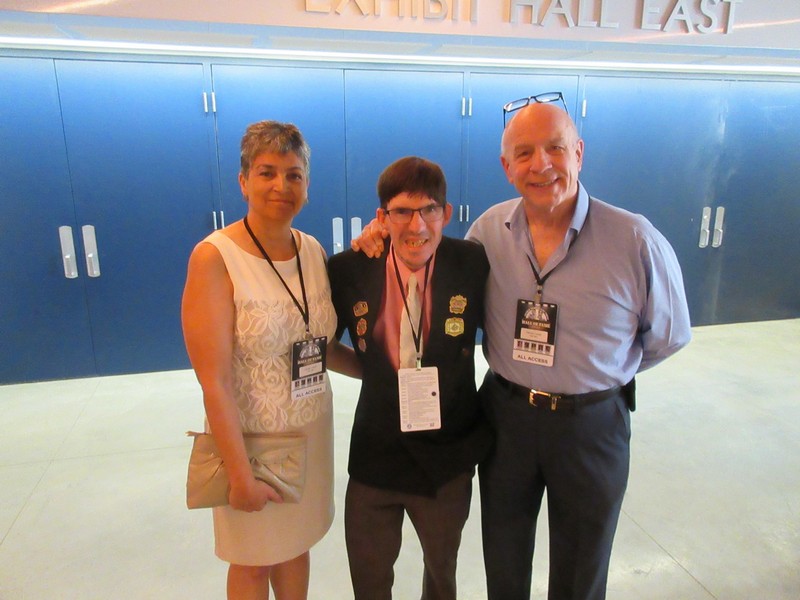 Thursday, July 15 was the first day of checking out the town and eating some great food for lunch and dinner.

The National Wrestling Hall of Fame Dan Gable Museum, which includes the Tragos/Thesz Hall of Fame, is very impressive.  Great historical layouts and memorabilia from amateur wrestling as well as professional wrestling.  Lots of hard work and dedication went into this.

The evening social event kicked off the festivities with a nice speech from Dan Gable who focused on the theme of the weekend: family.  “When you’ve got your family supporting your profession, you’ve got it made.”

Seeing Joyce Paustian receive the Impact Person of the Year Award was a nice touch.  Joyce said, “This was a complete surprise.”  Joyce has been one of the few who has attended every single Hall of Fame induction weekend.

Gerald Brisco stated, “We are all family.”  Even Mark Henry said, “You’re our family.”  Filsinger Games made a special presentation to end the event.

The Thursday night pro wrestling trivia contest was a lot of fun and my team won!  I won a $25 gift certificate to the Dan Gable Museum.  They have wonderful merchandise.

1. Round One of the Hall of Fame Classic Tournament: Jah-C defeats Gable Galileo

3. Round One of the Hall of Fame Classic Tournament: Brooke Valentine defeats Briar Hale by pinfall with the spear

4. Round One of the Hall of Fame Classic Tournament: The 1 Called Manders defeats Justin Decent by pinfall

5. Round One of the Hall of Fame Classic Tournament: Miranda Gordy defeats Heather Monroe by pinfall

8. Round One of the Hall of Fame Classic Tournament: Jeremy Wyatt defeats G.P.A. by pinfall with the piledriver. 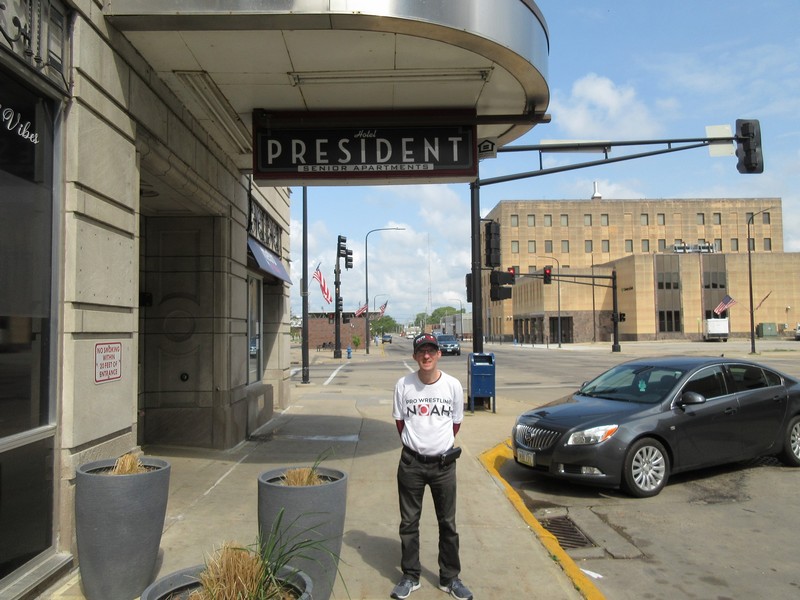 I decided to skip the Brisco and Big Ace podcast so I could check out the town some more, check out the museum, and get some rest before the show on Friday night.

8. Jeremy Wyatt defeats Jah-C by submission with the ankle lock to win the Hall of Fame Classic Tournament 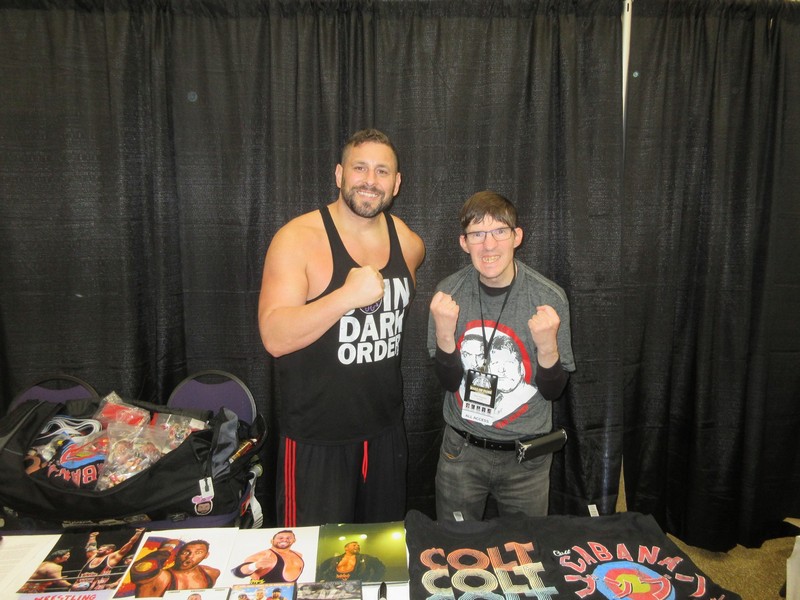 Saturday, July 17 had a wonderful surprise.  A tour of the basement of the Dan Gable Museum.  Wow!  Lots of room for storage and future expansion!  I decided to get some lunch, get a picture of the Hotel President where the National Wrestling Alliance was formed, and get prepared for the Autograph session.  It was a real honor meeting Mark Henry, Ken Shamrock, Wes Brisco, Red Velvet.  Sonny Onno was a huge surprise as I remember him during his days with WCW.  Chris Owens’ Andre the Giant collection was very impressive.

There was a Lifetime Members reception at the hotel bar.  I stated to the group how impressed I was with the induction weekend and plan to make it an annual event. 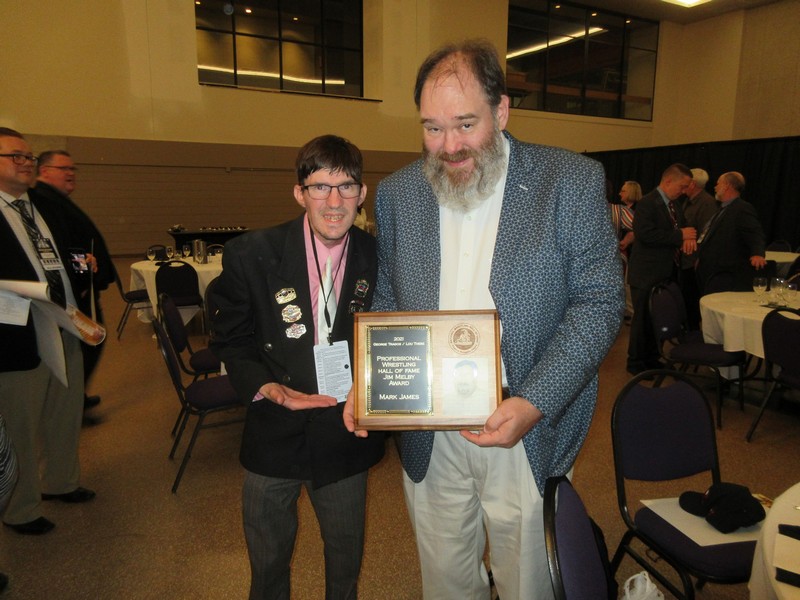 I was already dressed to style and profile for the main event.  The banquet and awards ceremony was very good and emotionally touching.  I was so thrilled to meet Mark James and sit next to him.  His speech was very inspiring and humble.  Mark stated, “If it mattered, it has to be preserved.  The past, we cannot allow it to be lost.  If you’re putting out information and releasing it into the world.  That’s a reason to do it.”

Jonard Solie talked about how his father, Gordon Solie, got started as a professional wrestling play-by-play announcer.  Ken Shamrock shared his life story as he talked about the huge challenges he had growing up as a child.  “How did I get to this place to where I’m going to be placed on this wall?”  “The only way I can fail is if I let it happen.” 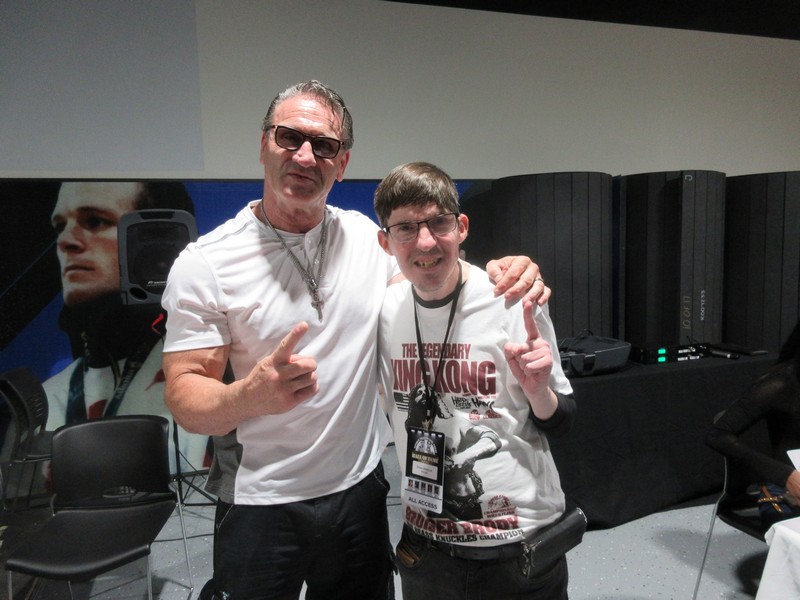 The most emotional and touching box office draw of the night without a doubt was the speech made by Rocky Kernodle as he honored his late brother Don Kernodle with a lot of help from Sgt. Slaughter.  Slaughter said, “I was blessed when Don Kernodle came into my life.”

Mark Henry put the icing on the cake as he stated, “You don’t get to be a champion without the common denominator of hard work.” 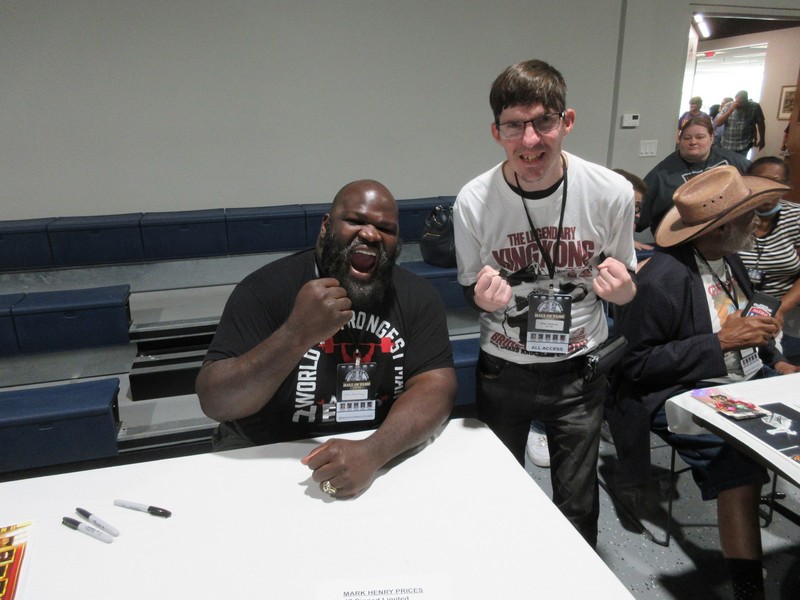 Overall, I had a lot of fun.  I will definitely come back.

Brian Westcott is a superfan based in Meridian, Idaho, and was the recipient of the 2012 Red Bastien Friendship Award from the Cauliflower Alley Club. Check out his website for more. 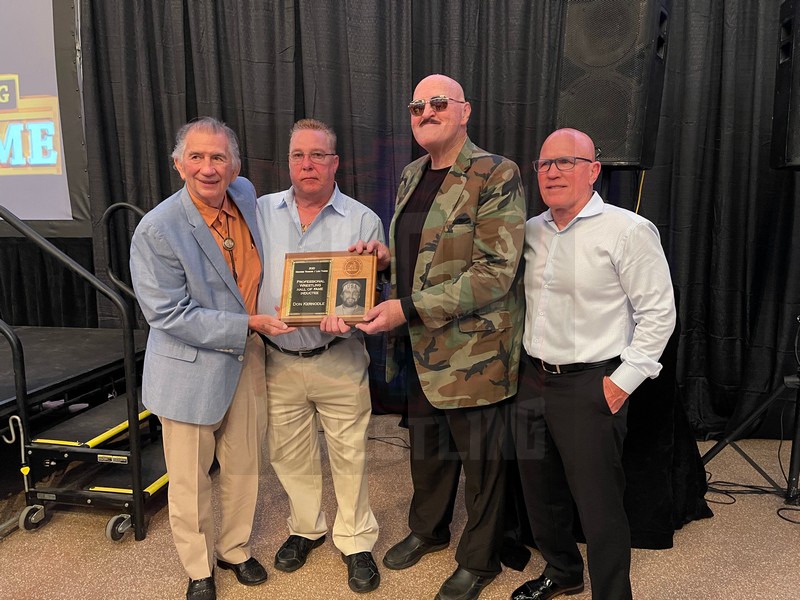 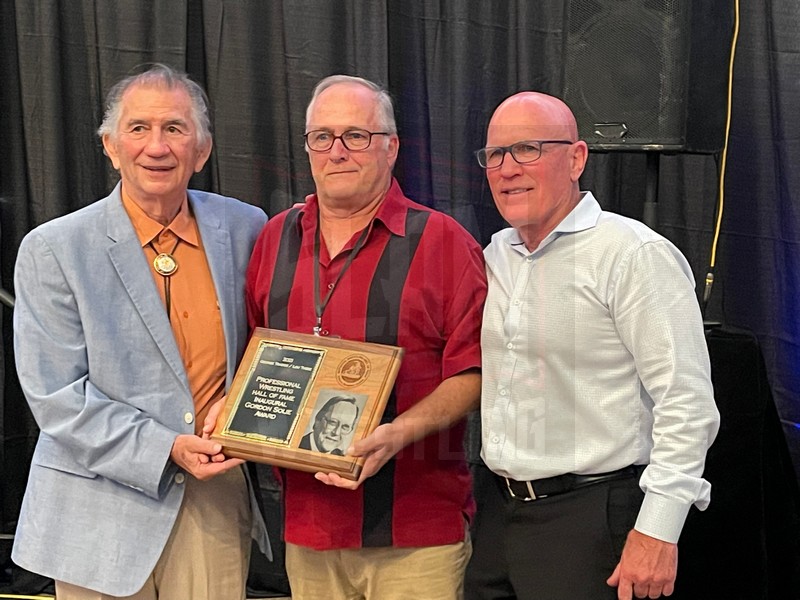 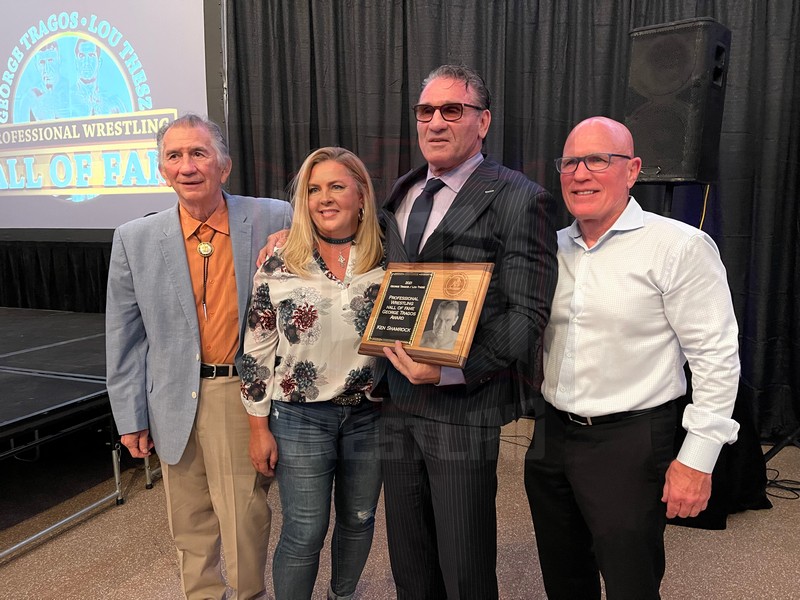 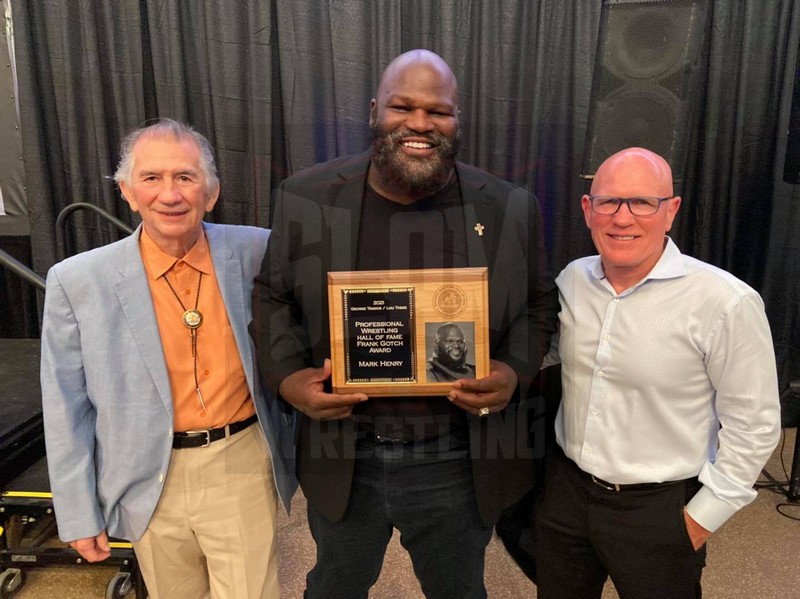 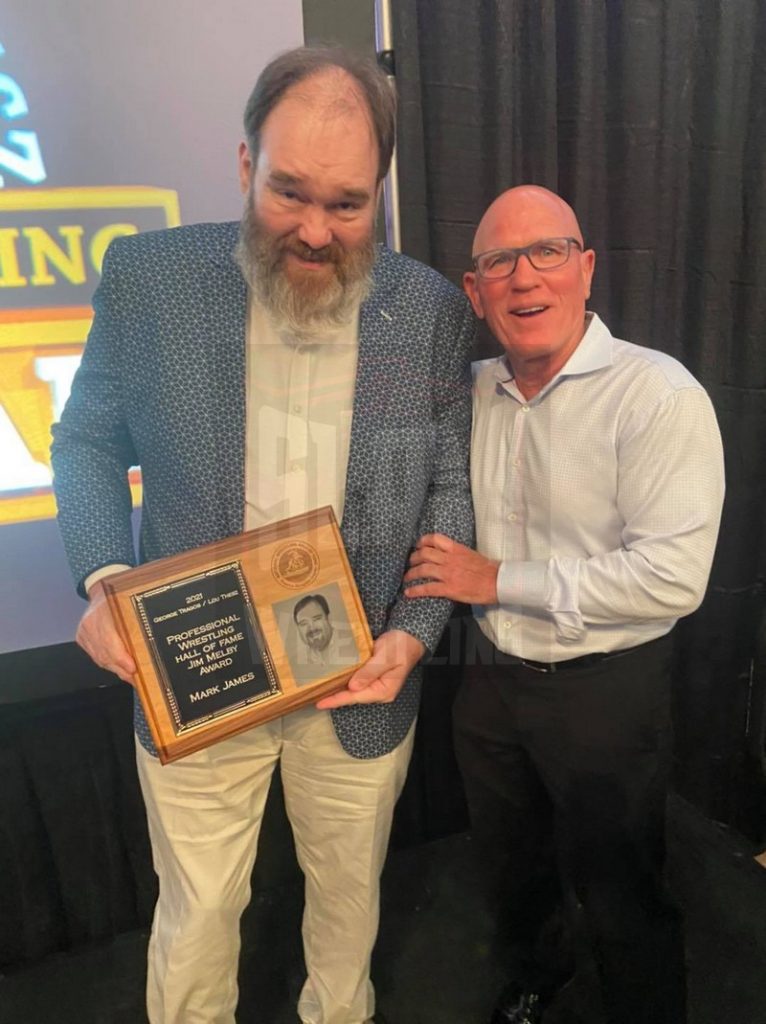 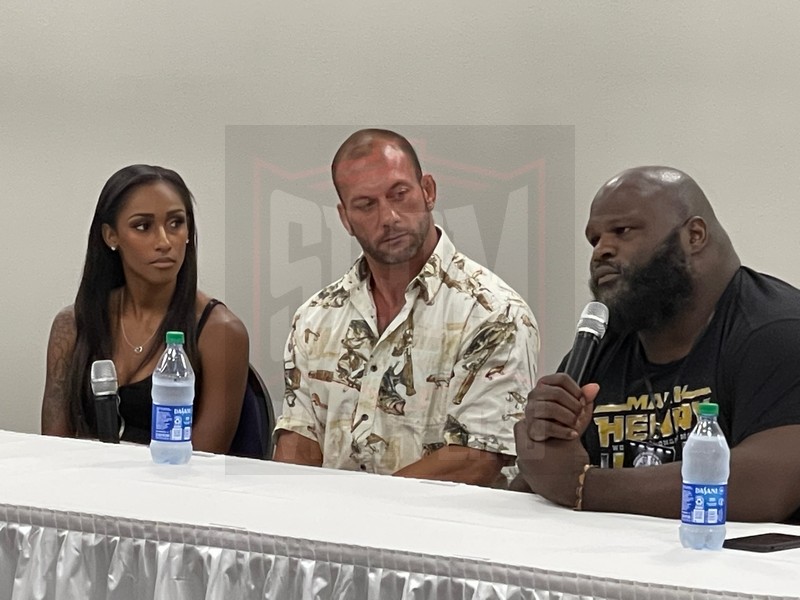 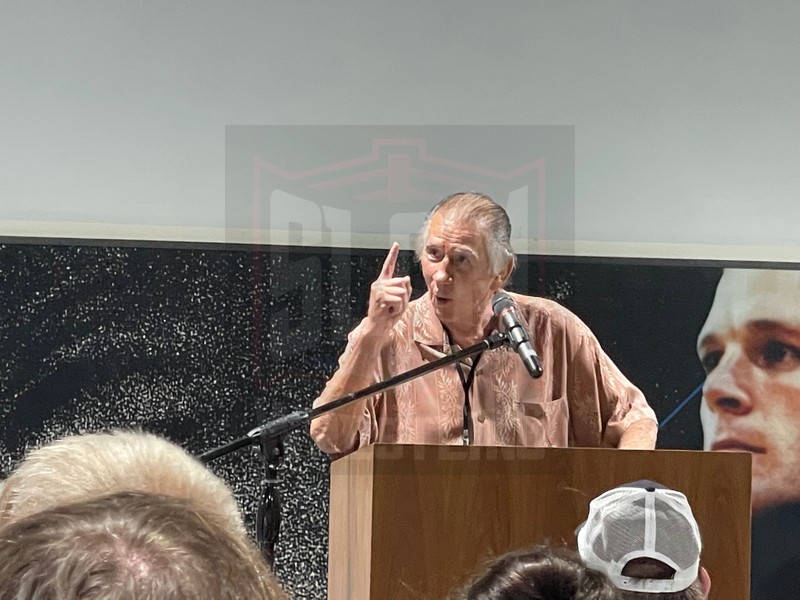 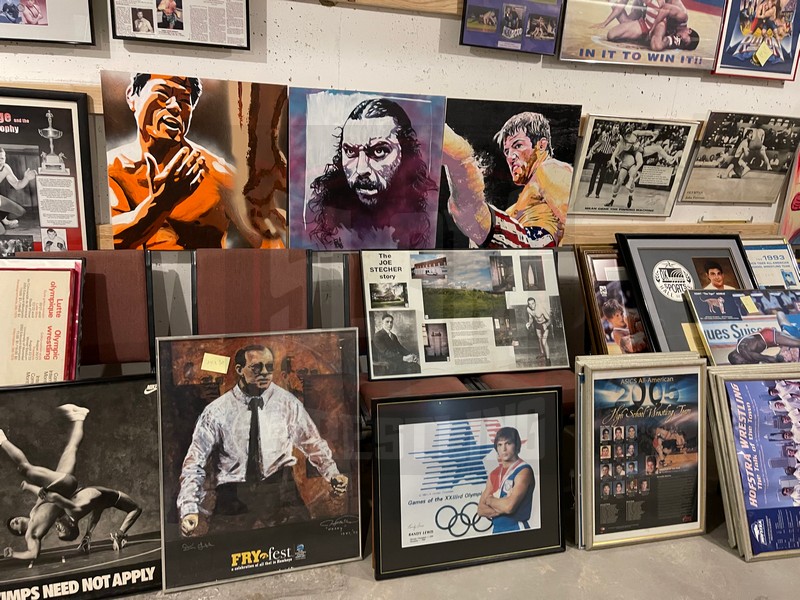 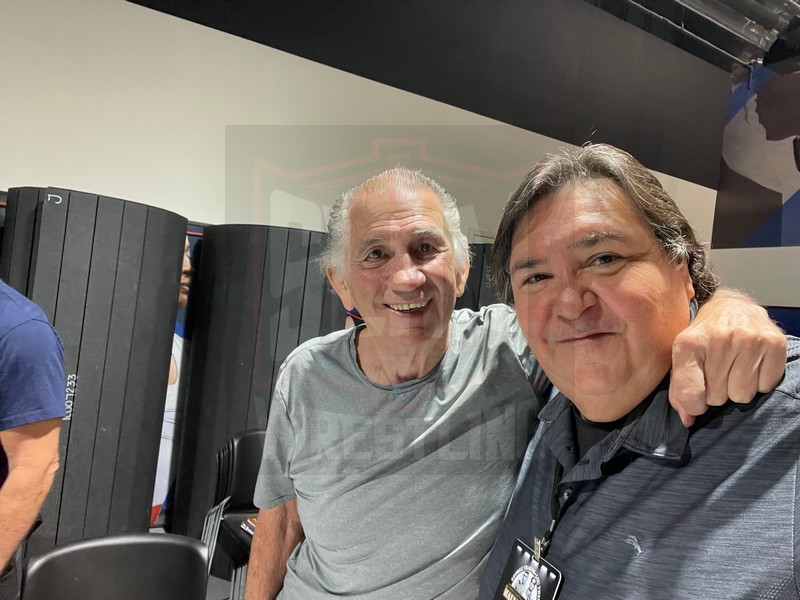 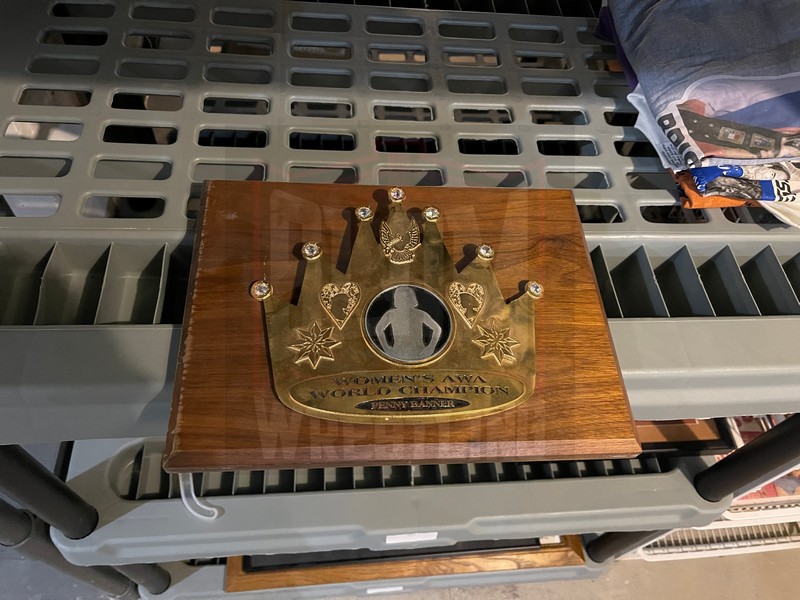 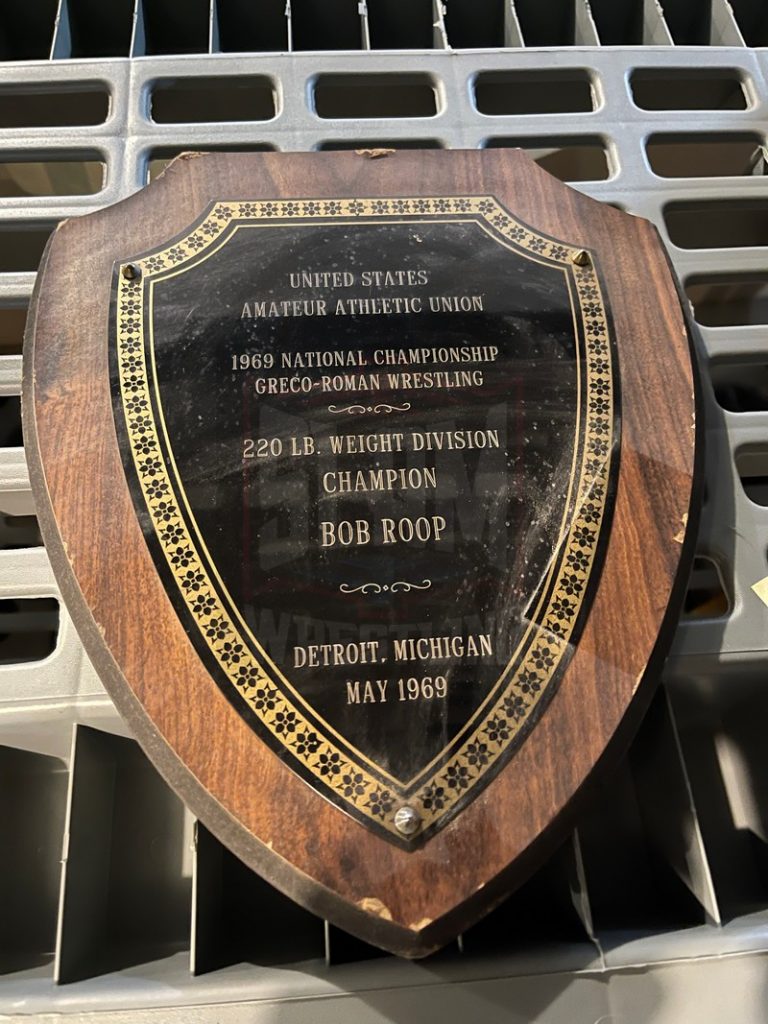 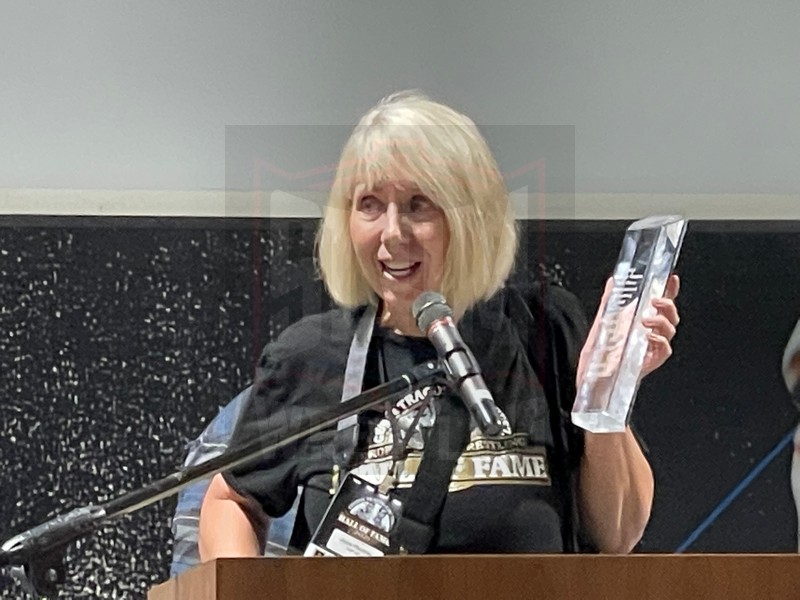 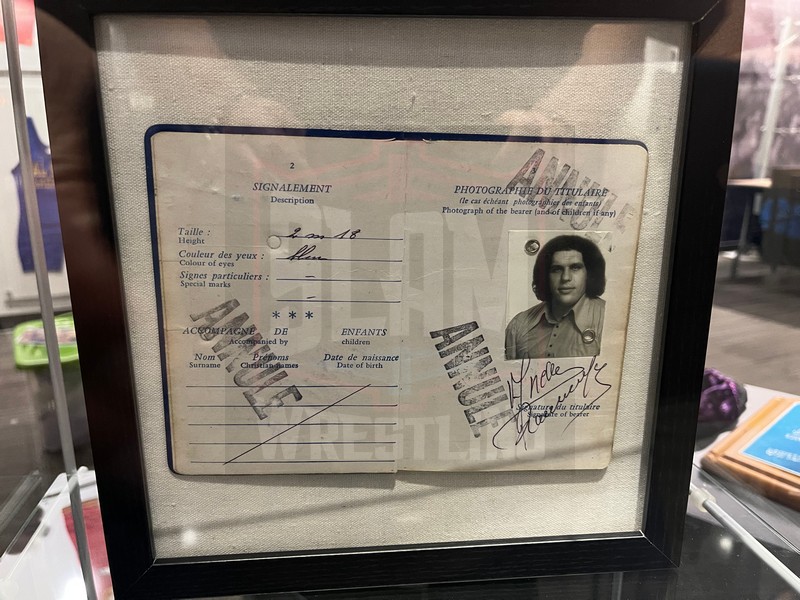 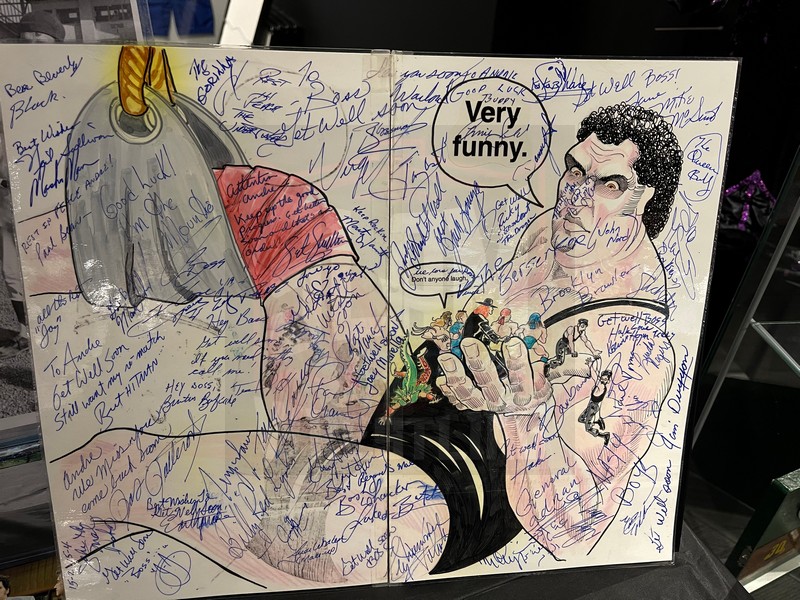 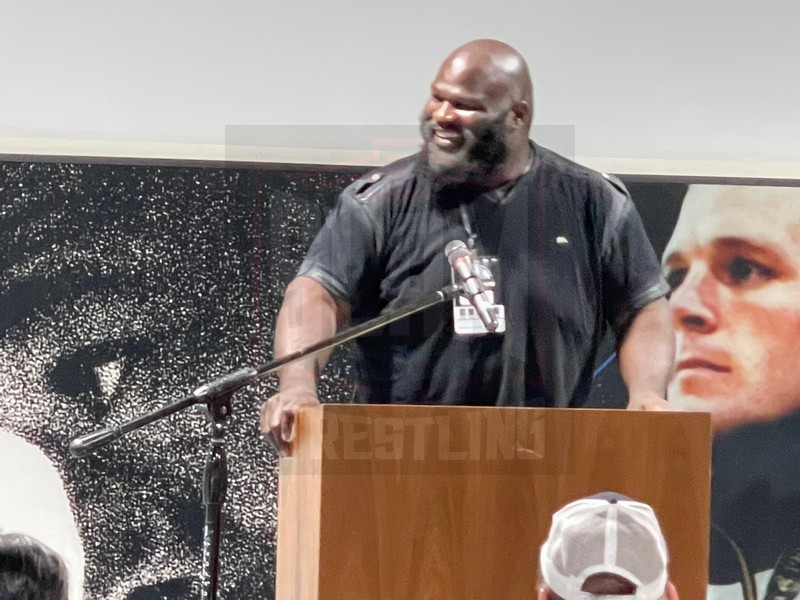 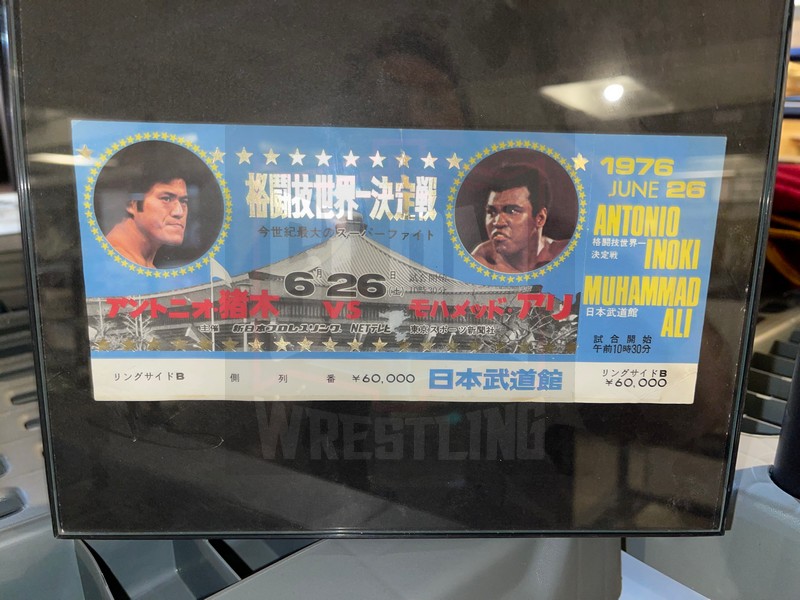