Monday Night Raw: Beyond ThunderDome, we DO need another hero 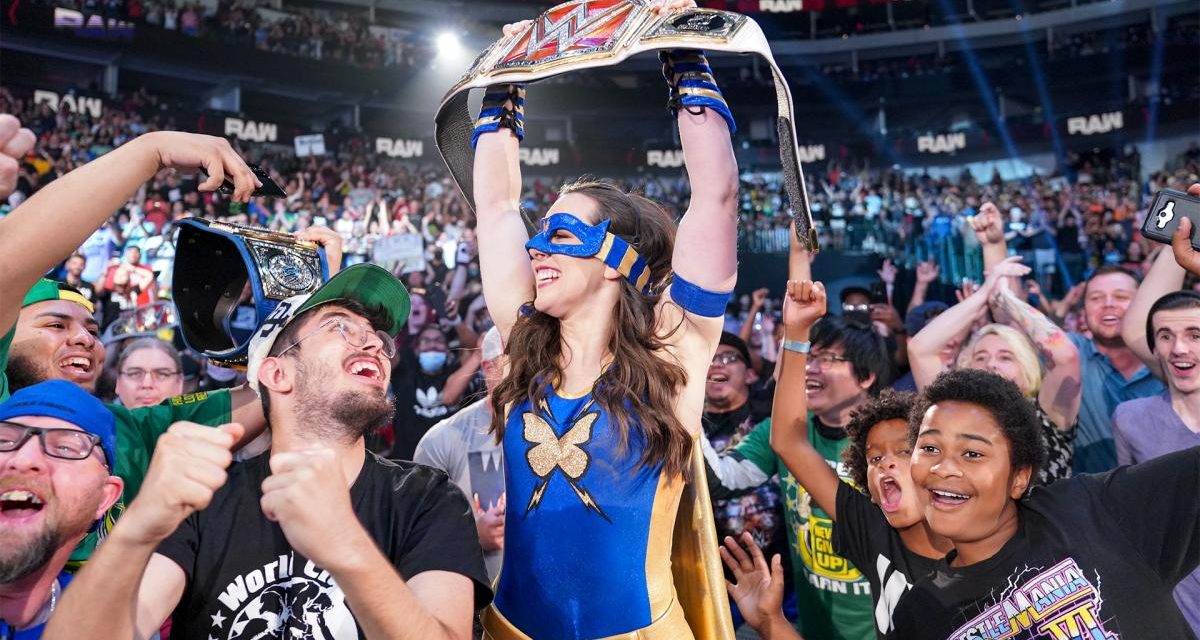 It’s time for the WWE’s most highly anticipated Monday night of 2021: the Raw after Money in the Bank. Normally, of course, it’s the Raw after WrestleMania that kickstarts a sort of new year for WWE storylines, but, as if you need another reminder, there’s not much normal about 2021. So, with a hot, live crowd in Dallas, Texas, you can bet there will be surprises and swerves. Let’s get to it.

John Cena is out first to a more positive than average response for him. He explains that he’s back in the WWE for the fans and for Roman Reigns, and he wants a shot at the Universal Championship at SummerSlam. Why? Because Reigns is an “@$$hole”. Cena promises to be on SmackDown this coming Friday to set things in motion.

He stays in the ring as one of the first match’s contestant scoots out — yes, it’s Riddle, and the two have a “Bro” based conversation that the crowd eats up because everything is candy when it’s your first live show in over a year. Shoot, they even broke out the “What?” chant.

Riddle and Morrison start off, with neither of them looking particularly bummed about having lost out on Money in the Bank last night. After trading some kicks with Riddle, Morrison is stopped cold by a knee from the incoming Erik. Ivar tags in and bodyslams Johnny Drip-Drip, and then lets himself be bodyslammed onto Morrison by Erik.

After Morrison manages to tag in Styles, tag rules break down and everyone takes shots at one another. Most everyone ends up on the floor, where they are perfectly set up for Omos to throw Styles like a dad throws his kid into a pool, over the ropes and taking the whole group out going into commercials.

Back from break, Omos is throwing and dragging Riddle around like he’s a WWF Wrestling Buddy. After a couple of tags, we end up back where we started with Morrison and Riddle, but they’re barely in there for round two before two more tags bring in Styles and a big pop as Erik enters.  The Viking Raider blocks the end of a Phenomenal Blitz before delivering something like it of his own.

Ivar and Morrison have an acrobatic face-off, ending with a missed moonsault by Ivar — but a missed Starship Pain by Morrison as well. Riddle decides that things are not going his team’s way, so he swipes a drip-stick from The Miz and squirts Omos from behind. 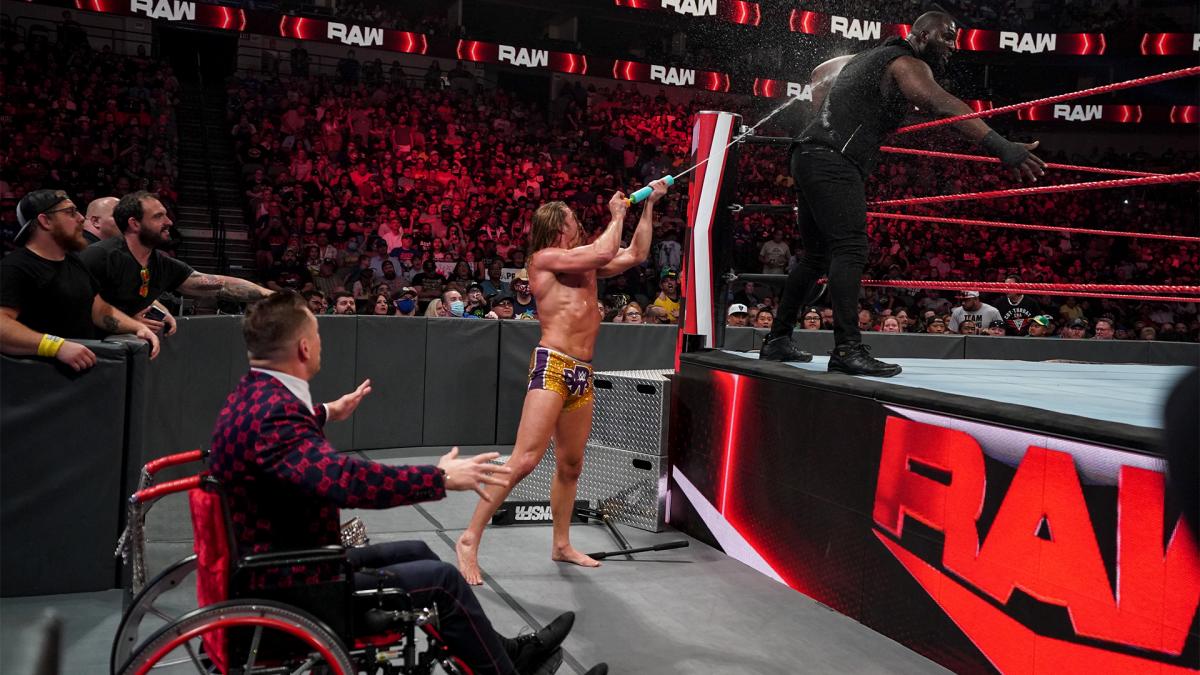 Omos, naturally, thinks that the A-Lister is responsible, so he stalks him up the ramp. When Morrison tries to stop the big man, he is thrown into the ring where a Viking Experience awaits.

Backstage, Jaxson Ryker is looking emotionless and promising something bad for Elias. These first live crowd shows are great for finally seeing some authentic reactions, and not just piped-in boos or cheers for whoever the WWE thinks should get either of those. I’ll be honest: I wasn’t expecting real cheers for Ryker.

Not sponsored by Megadeth, this match features a ring surrounded by musical instruments; it’s essentially a no-holds-barred match. The fight goes outside right away where Ryker beats Elias with an electronic keyboard and goes for a pin. Ah, so it’s also falls count anywhere. Elias is driven into a drum kit, saves himself from a guitar smash with a high knee, but is then sent flying into a gong that failed to provide the expected sound effect.

After a break, Elias has gained an upper hand, blocking Ryker from running his head into a ringside piano, soon dropping Ryker onto his back on top of the baby grand. With Ryker on the ground, Elias slams a cello onto his  back twice over, but it’s only worth a two-count. The finish comes around as Ryker thinks about a superplex into the ring, but instead he changes positions and superplexes Elias to the outside floor and through two display tables.

In the ring, Charlotte Flair is hosting a coronation ceremony after winning her eleventh world title. The number of world title victories for Flair is becoming farcical. Flair says she doesn’t need to take a page out of anyone’s book. This is moments after entering to the disco version of her father’s music, and hours after winning with the disco version of his finisher.

The crowd chants for Becky Lynch, but it’s Rhea Ripley who can’t wait backstage anymore. She asks for a re-match tonight, which Flair declines. Pearce and Deville stroll out, though, and they make the match official. Flair immediately kicks at Ripley’s knee, injured in the match last night.

We join the match in progress after a commercial break, and yes, you’re reading that stipulation correctly. This is yet another nonsensical “beat the champs for a shot at beating the champs” match. Jax interrupts an attempted tag by Natalya, pulling Tamina to the floor before giving her a Samoan Drop into the barricade. In the ring, Natalya suffers an elbow stomp from Baszler, but Tamina manages to land a blind tag on her back to come in. She has a superkick for Jax on the apron, and another for Baszler for the win.

Are you wondering why that match had to happen? It’s because Baszler appeals to Jax that they were better without Reginald. Apparently she agrees, headbutting the sommelier and cutting off their association. 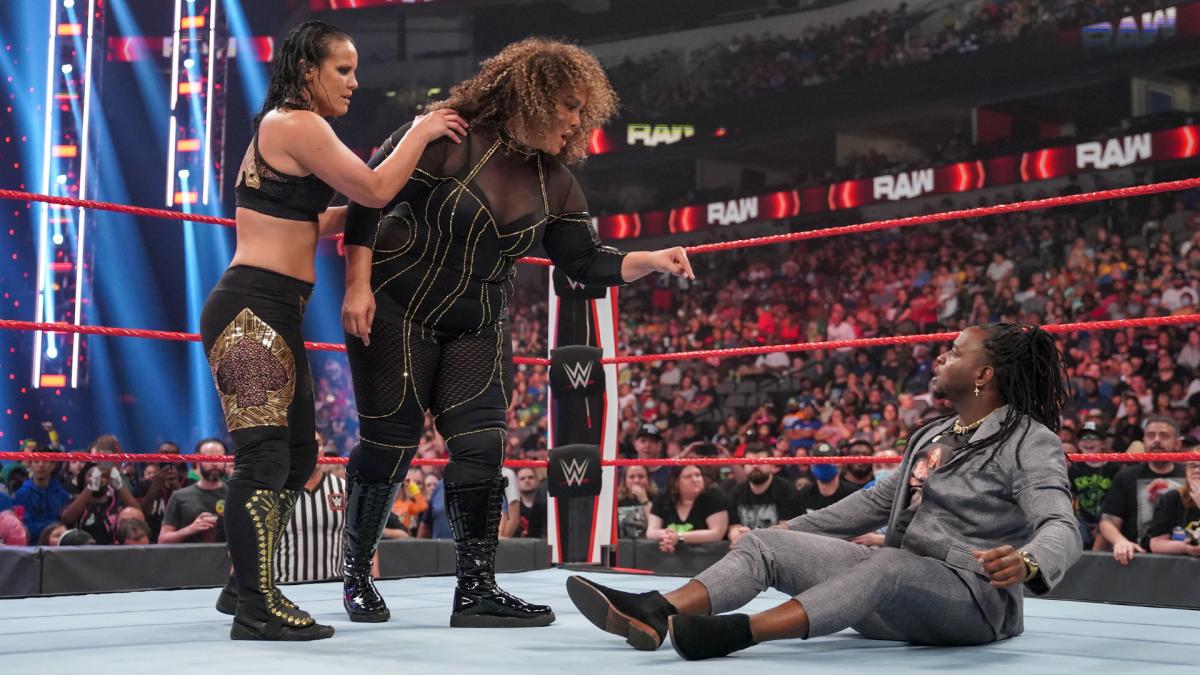 Personally, I’d rather have seen Baszler break off on her own again, but oh well. Photo: WWE

As Reginald watches them leave, 24/7 champion Akira Tozawa runs to the ring, with would-be champions in tow. After a quick scuffle and a somersault senton, Reggie pins Tozawa to take the title. He makes an acrobatic escape to the back.

Carrillo is super-aggressive, laying forearm smashes and boots all over Sheamus. He tries to rip the mask off of the champion, and bites at Sheamus’ fingers when the Irishman tries to take the challenger’s face off. Seeming like he was looking for a place to hide, Sheamus is brought crashing to the ring with a hurricanrana. A dropkick sends him to the outside, and a follow-up sends him over the announcer’s table.

Carrillo lands a top-rope dropkick on Sheamus’ left arm for a two-count. A punch to Sheamus’ facemask stuns Carrillo temporarily, allowing the champ to return with a Brogue Kick for the win.

The WWE Champion is in the ring next, as Lashley and MVP issue an open challenge. First, though, MVP describes the beating that Lashley lay upon Kingston last night as a message.  He claims that Kingston was right, though, that the parties and the good life had taken the fighting spirit out of the champ, but that’s over.

Well, someone wants to put that to the test — and it’s Keith Lee.

Careful lock-ups give way to Lee simply lifting Lashley up and running him into multiple corners. As Lashley tries to run up the tempo, Lee stops him cold with a cross-body. The champ powers into a dominant position though, clotheslining Lee over the top rope and chasing him to the floor. Lashley manages to lift Lee in a fireman’s carry, though he can’t do anything with him but let him slip to the floor. Lee then runs Lashley into the corner post, but it doesn’t faze the champ for long.

Back in the ring, Lashley calls for the Hurt Lock but struggles to cinch it in. Lee breaks free, so Lashley chokeslams and spears him instead.

After the match, as Lashley continues fuming, Goldberg’s music hits. The less-than-part-timer enters the ring to yell “I’m next” at Lashley. I guess this will do until the Lesnar/Lashley match. 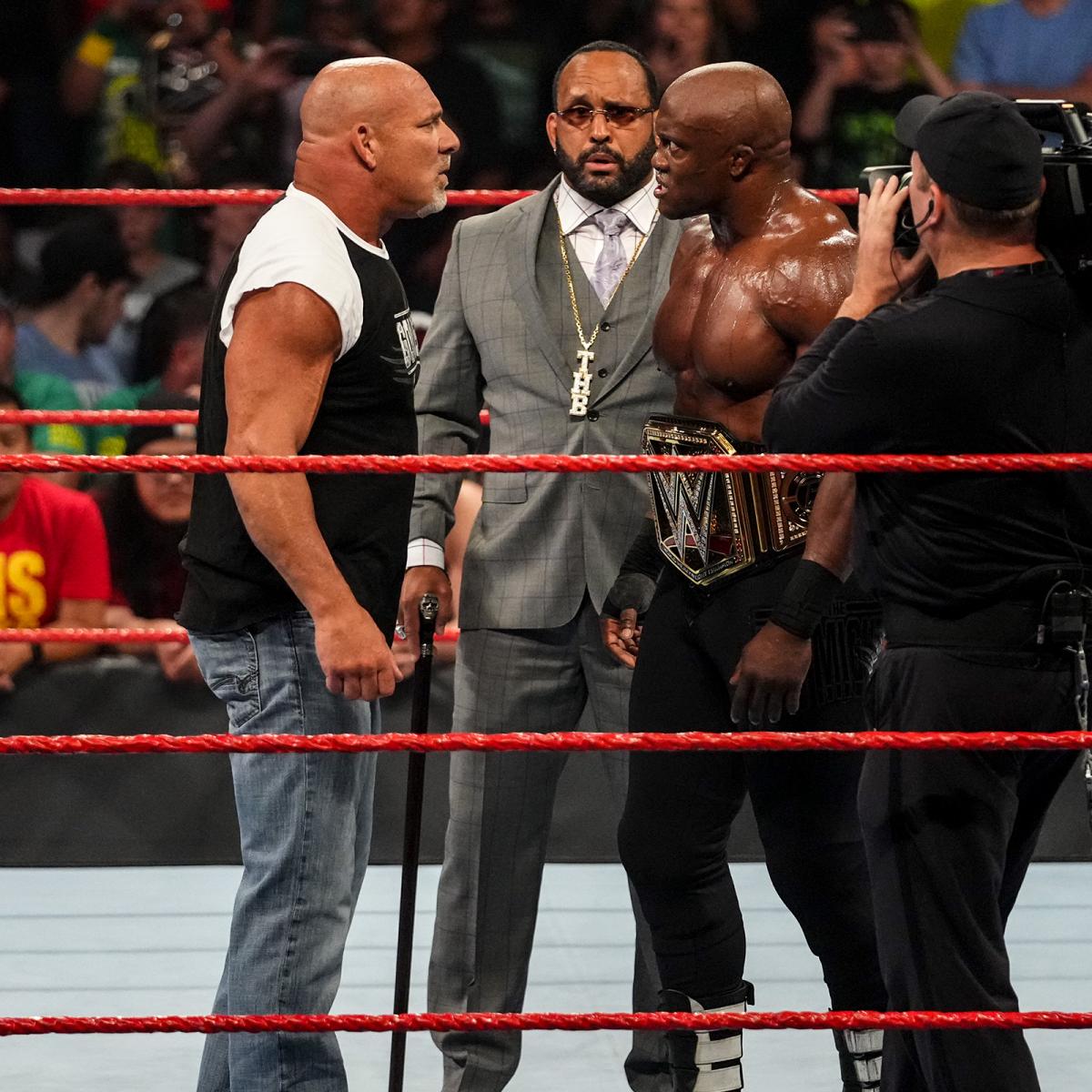 Ready for another five-minute match filled with finishers? Photo: WWE

After the break, Jinder Mahal is in the ring with Shanky and Veer, gloating over the karma he delivered to Drew McIntyre last night. He claims that while the big Scot wrecked his bike, he can always buy another one. In fact, he can buy ten. However, as long as Bobby Lashley is champion, McIntyre will never have a title shot.

As Shanky begins singing Happy Birthday to Mahal (yes, it’s his birthday), McIntyre enters behind them and lays out Mahal with a chair. He then has Shanky alone in the ring and delivers twenty chair shots to his back.

Next up is a Monday Night Raw debut, which was announced earlier in the night instead of keeping it a surprise: it’s NXT Champion Karrion Kross.

Kross, for the record, is by himself. A punch, stomps, and overhead tosses are Kross’ weapons. As Hardy goes for broke and misses a Swanton, though, Kross readies his elbow finisher. Hardy dodges and rolls the NXT champ up and gets his feet on the ropes for the pin.

It’s time for Alexa’s Playground. She welcomes Lilly back from her time-out, but in come Eva Marie and Doudrop. Alexa suggests that Doudrop take a time-out so Eva can prove what she can do on her own.  Eva is not into that and they leave, but Eva mysteriously (and unconvincingly) trips on the way out. What could have caused that?

No waiting around to start this match, as both try to gain the upper hand early. Ripley throws Flair into the corner, and she somersaults over the ropes and onto the apron (which isn’t taking the page out of anyone’s book, of course).  She leaps back into the ring and brings Ripley down with an arm drag, but Ripley responds with a dropkick. Flair gets back in charge with a chop (a move that’s all her own – still no page taken out of any book), but the challenger hits a hard German suplex moments later.

After Flair clotheslines Ripley to the floor, kicking at her knee as the challenger tries to get back in, Flair sees an opportunity and charges around the ring, taking Ripley down with a chop-block. The Charlotte Flair greatest hits just keep on coming. After a break, Flair is busy working over Ripley’s knee in all sorts of ways, but Ripley’s arm is fine and uses it for a series of clotheslines.

Ripley has no problem taking a page out of Flair’s book and cinches in a figure-four leglock, but Charlotte quickly reverses it. Soon after, a Riptide nearly costs Flair her title but she gets her feet on the ropes. Flair has had about enough and grabs her belt to walk away from the match. Ripley goes after her but is hit with the belt for her troubles, bringing the match to an unceremonious DQ ending.

… for now. Ripley lands a kick to Flair’s head before leaving the ring, and seconds later a very heroic theme song lights up the crowd. Somebody’s cashing in…

The crowd buzzes as Nikki climbs the ropes. Flair staggers to her feet and Nikki lands a crossbody – and that’s all it takes.

Nikki dives into the crowd to celebrate as the show goes off the air.

It’s still too long, and the fumbled introduction of Karrion Kross is something they’ll have to recover from, but it’s hard to beat the energy of this show.