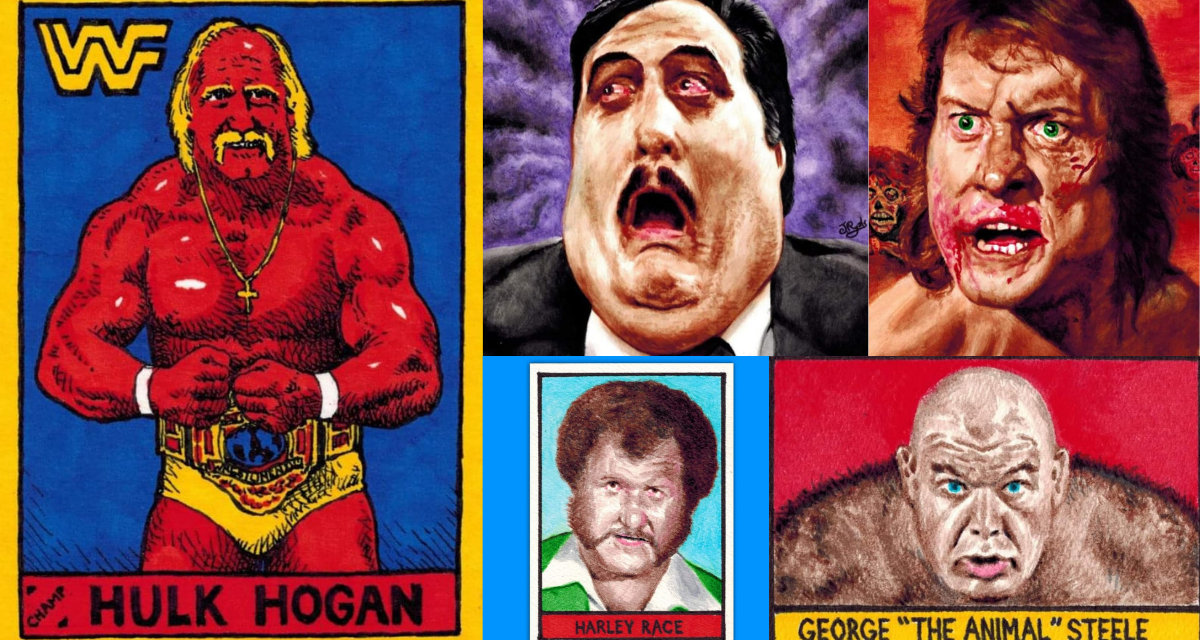 Josh Ryals began drawing around the same age people learn to walk. His father was a helicopter enthusiast and would draw pictures of helicopters. When his father was young, one of his uncles worked at Bell Helicopter in Texas. The Bell Jet Ranger is a model that Ryals was so familiar with, he could draw it without any reference. Ryals’ father would often times draw him inside the cockpit of the helicopter. Ryals eventually began to draw things he was passionate about such as classic monsters, scenes from films, and his favorite sport, pro wrestling. 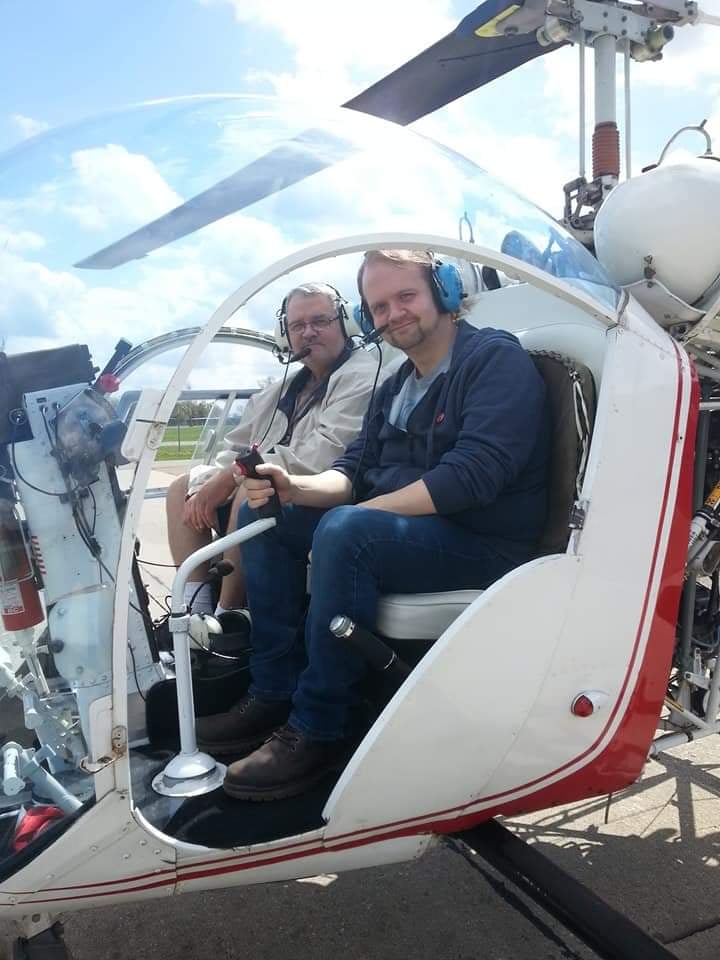 Josh Ryals and his father seated together in a helicopter. Courtesy Josh Ryals.

When he got a little older, Ryals had won numerous drawing contests and was featured each time on the front page of his hometown newspaper The Daily Tribune. In his senior year of high school, he won a Scholastic Gold Key Award for one of his art pieces. Not so long after that, director David Lynch selected one of his drawings for an online art gallery he put together. After high school, Ryals and his younger brother would begin to make amateur films with an old handheld VHS camcorder given to them by their grandfather. They would try to re-create old fight scenes from action films they watched growing up.

Ryals created a YouTube channel, where his alter-ego Conal Cochran takes over. The channel was featured on CNN twice during the presidential election season, one of which was included in a documentary, another was incorporated into Charlie Sheen’s touring standup comedy show; it even made it to a morning talk show in the Philippines, of all places. Because of his new-found fame, Ryals ended up becoming good friends with Kevin Lieber, host of VSauce2, and together, they edited some music videos for actor Clint Howard.

SlamWrestling.net talked with Josh Ryals about his art, and more.

Q: Who are your favorite pro wrestlers to paint and why?

Josh Ryals: I really can’t say I have just one favorite. Hulk Hogan is a lot of fun, especially if my reference is from one of his promos; great facial expressions, shiny skin and very wide eyes! Andre The Giant is a lot of fun too because of the uniqueness of his facial features. I’ve painted portraits of luchadors El Santo, Blue Demon and Mil Mascaras and those were a lot of fun. I like painting the designs on their masks, the cuts of their eye holes, nose holes and mouth openings and trying to capture their likenesses beneath all of that. Wrestlers wearing face paint is also fun and somewhat similar to masked subjects. I painted a card of ’80s/early ’90s Sting once and loved how that turned out. Tor Johnson is one of my favorite subjects because of all of the horror movies he appeared in! I love painting horror movie icons. 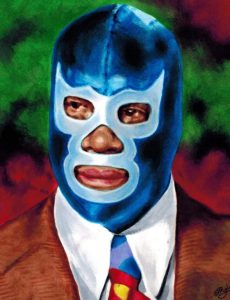 Q: Discuss some classic wrestlers that you draw?

Josh Ryals: I have a friend who works at a convenience store down the street from my home. I like to paint cards of the guys who wrestled at Cobo Arena in downtown Detroit in the 1970s & ’80s in The Sheik’s promotion, Big Time Wrestling. My friend went to a lot of those matches. I suppose some of those competitors aren’t as well known nationally but they’re remembered with great fondness here in the Detroit area; guys like Lord Layton, Mighty Igor, Tex McKenzie and Luis “Ariba” Martinez. For anybody interested in the Detroit wrestling scene of that era, I highly recommend the documentary I Like To Hurt People. It features many of the Big Time wrestlers and also legends such as Andre The Giant, Dusty Rhodes, Bobo Brazil, Ox Baker and Dick The Bruiser. 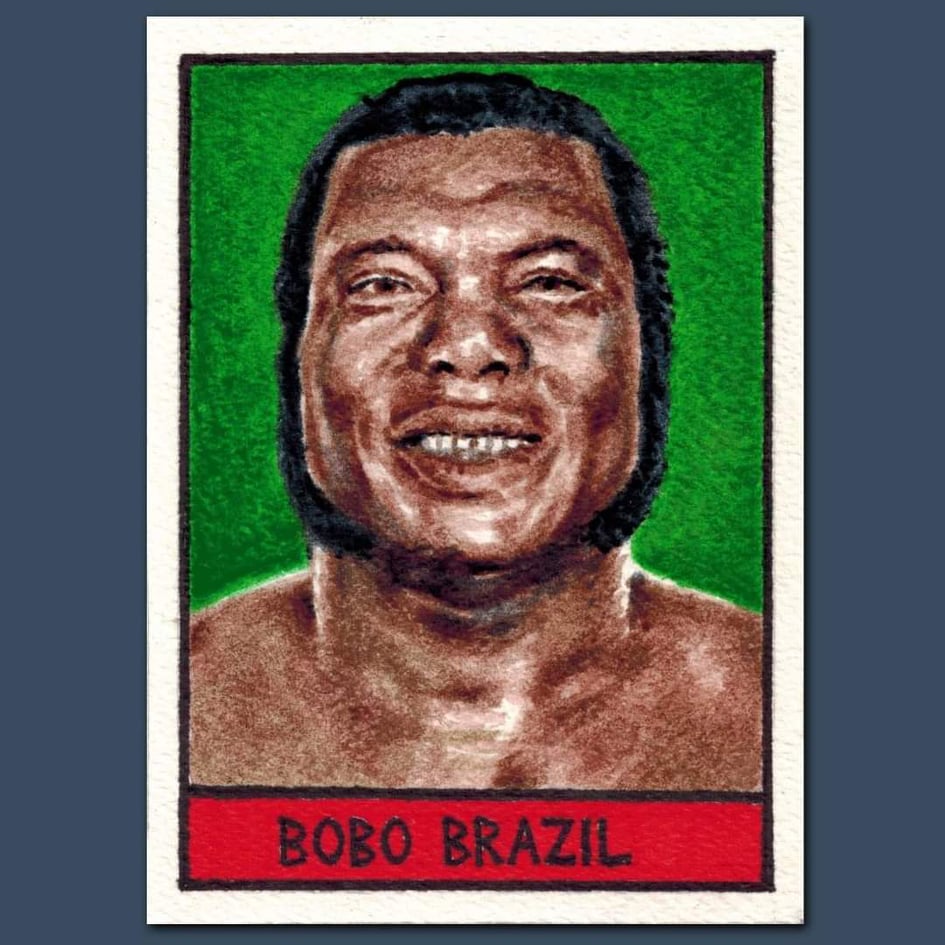 Q: What is your favorite film?

Josh Ryals: These days I don’t think I can even come close to picking a favorite movie. There are so many! Growing up though the films I enjoyed watching the most were Frankenstein (1931), Robocop, The Terminator, Bloodsport, Batman (1989), Commando, Ernest Goes To Jail and Ernest Scared Stupid! Frankenstein ’31 is the one that really got me into monster movies and desiring to draw pictures of them, so that’s one of the most influential of my life.

Q: How did you get interested in pro wrestling?

Josh Ryals: I don’t remember the specific event but I know it was WWE (then WWF) and it was on weekend television in the morning. I liked it right away. The face paint, the colorful costumes, the masks, the huge competitors, the music, the moves… it all appealed greatly to me. Andre The Giant, Texas Tornado and The Undertaker were my favorites back then. I knew of WCW because of the figures I’d see in Big Lots but I didn’t watch because we didn’t have cable. My favorite independent wrestling promotion is the Michigan Wrestling Organization which is run by promoter/wrestler/commentator Jason “The Basher” Clouse. 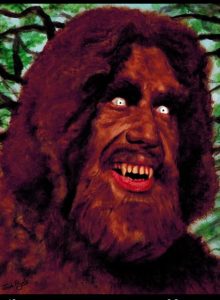 Andre the Giant as Bigfoot painting by Josh Ryals.

Q: Discuss some of your favorite pieces and why?

Josh Ryals: Some of my favorite pieces are my two most recent depictions of Boris Karloff in Frankenstein (1931), Lon Chaney in The Hunchback Of Notre Dame (1923), my painting of Robert Shaw as Quint in Jaws, my portrait of actress Andree Melly in Brides Of Dracula, my most recent portraits of Glenn Strange as Frankenstein’s Monster, Lon Chaney Jr. as The Wolf Man, Tor Johnson in Night Of The Ghouls and Christopher Lee in Curse Of Frankenstein. Among other artists I am a huge fan of the art Basil Gogos did for covers of Famous Monsters of Filmland magazine. Basil is probably my number one influence on the art I’m doing now. I’m also a big fan of what Bob Eggleton is doing. Bob has come up with some of the most amazing Godzilla and Gamera paintings I’ve ever seen. If you haven’t had a look at his work yet you should definitely check it out. He’s on Instagram.

Josh Ryals: Right now I’m a huge fan of Stranger Things and Mystery Science Theater 3000 — the original show. I’m wanting to get into some of the newer MST3K stuff eventually, but right now I’m collecting DVDs of the original series and enjoying those a lot. I am very much looking forward to their upcoming 13th season! I grew up watching quite a few TV shows but some of my absolute favorites were The Simpsons, Married… with Children and Saturday Night Live.

Q: What are you working on now?

Josh Ryals: A portrait painting of Dwight Frye as Fritz in the 1931 film adaptation of Frankenstein! This will be my first portrait of Frye in this role. I’ve painted him once before as Renfield in the 1931 Dracula. I’m also piecing together the 145th episode of my weekly podcast called Content Abnormal. I am a horror host that as a character named Frankentiner. Presented are spooky radio broadcasts mostly from the 1930s & ’40s.

Q: What is your best advice?

Josh Ryals: Find the things you love and that make you happy to be alive and stick with them. In my own experience when I would fall into a bit of a funk and feel like I was without direction I’d realize I’d gotten away from lots of the little things that brought me joy each day. I’d embrace those again and it helped a lot.