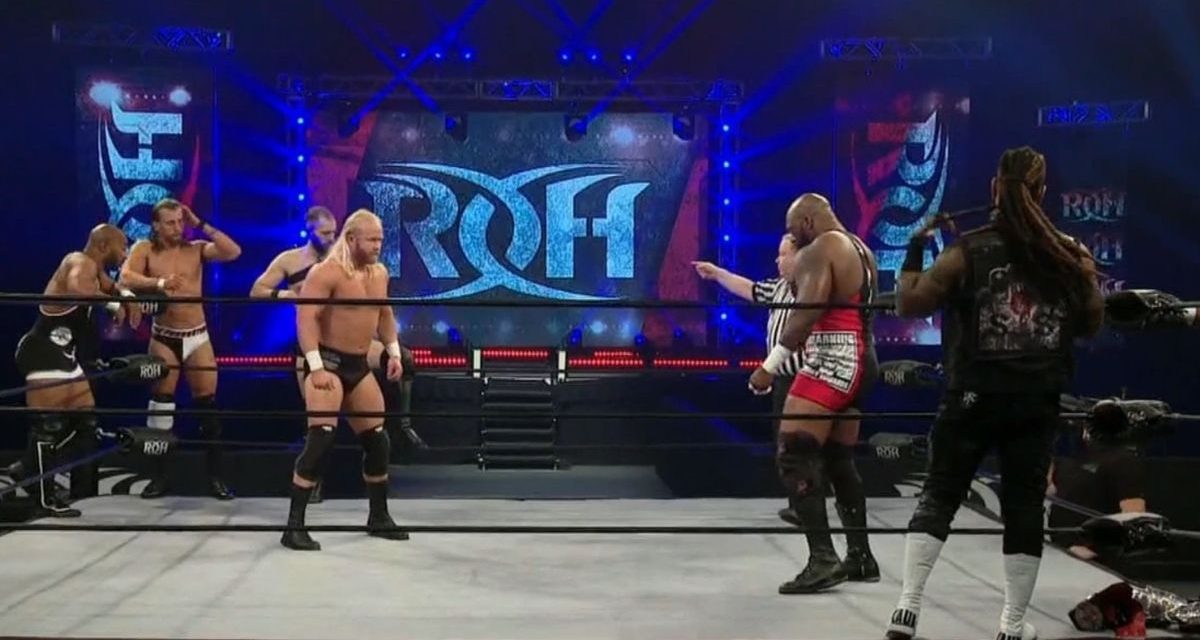 Greetings and salutations everyone and welcome to my first ROH TV report. I will be your tour guide for your weekly ROH TV needs. This episode of ROH TV is the first since its Best in the World PPV. With that said it could be seen as a great jumping on point for new viewers. Without further ado let’s get to it.

The show kicks off with Dalton Castle not having the time for being interviewed. In the background Johnathan Gresham is being tended to after injuring himself while training with Joe Keys. The rest of the foundation is worried he won’t be ready for the 8-man tag later in the night. “Hot Sauce” Tracy Williams suggests that Joe Keys replace Gresham for the match later on the show as the rest of The Foundation nod in agreement.

Brian Johnson is hosting ROH TV for this week as Quinn McKay is competing in the show. It is announced the main event is Shane Taylor Promotions vs The Foundation. Quinn McKay vs Mandy Leon is also announced for the show as Brian Johnson mocks McKay for trying her hands at wrestling. Lastly, the first match of the night is announced to be Fred Yehi vs Rey Horus.

Ian Riccaboni and Caprice Coleman welcome us to Chesapeake Employers Insurance Arena in Baltimore, Maryland. It is immediately noticeable that this episode of ROH TV was filmed during the pandemic as we are still in an empty arena.

Both men enter the ring and adhere to the Code of Honor.  The match started off very technical which suits Fred Yehi’s style a bit more. As the match continued the competitors adapted more to Rey Horus’ style as we saw a more lucha influenced style of match. Rey Horus with a beautiful flip over the ropes on the corner of the ring onto Yehi who was waiting for him outside of the ring. Horus also delivered a spinning frog splash to Yehi for two. This is when Fred Yehi took control of the match with a few brutal blows to the head and traps Horus in the Koji Clutch. Horus was very close to submitting but his last ditch effort of using his feet to grab the bottom rope extended the match a bit longer. Fred Yehi continued to focus on Rey Horus’ neck and shoulders. Fred Yehi climbed the middle rope but Horus realized this, ran to him, also combed to the second rope and delivered a body scissor driver into a cover for the win.

Mandy Leon is annoyed that she needs to record a promo getting her thoughts on Quinn McKay. Over the promo we got a video package hyping the match up. Mandy Leon is overly confident heading into the match while also mocking Quinn McKay for trying to be a wrestler.

A Quinn McKay promo was up next. She claimed this is her last opportunity to be a wrestler. She is ready to prove to the naysayers that she deserves to be in the ring. McKay outlined the parallels in hers and Leon’s careers and is ready to beat Mandy Leon who she claimed is a shadow of who she used to be.

After their respective introductions, McKay extended her hand for the handshake and while the code of honour is adhered to, Mandy Leon grabs her and lands a clothesline to McKay. Leon grabbed the mic and teased McKay for falling for the oldest trick in the book. Leon dragged McKay’s face on the ropes and then used the ropes to get McKay on an illegal chokehold as the ref counted to five. This angers McKay as she drops Leon and begins to rain down fists of her own to Leon.

As the match continued Leon began to take her opponent a bit more seriously as McKay is proving that she does indeed deserve to be in the ring. Leon delivered a beautiful running neck breaker, swinging neck breaker combo for the close two count. McKay locked in the Tangerine Dream (Sleeper) and Leontapped but Angelina Love had the referee distracted on the opposite corner. Once McKay realizes what is happening she has a few choice words with the referee but Love handed Leon a pair of brass knuckles who delivers a big punch to McKay for the three.

After the match Love and Leon mock a fallen McKay as they continue their celebrations.

Meanwhile, Maria Kanellis who was on commentary during the match says that the referee could only call the match as he saw it but since she is on the board of directors, she can do what’s necessary

O’Shay Edwards and Joe Keys kicked things off. Joe Keys used his pure match rules experience to out wrestle O’Shay but O’Shay is too strong for Keys as he maintained overall control and punished Keys for his efforts. After the break, Jay Lethal and Shane Taylor are in the ring as we get back and forth punches from both men. Taylor drops Lethal to the floor on his knees and attempts to go for a knee to the face but Lethal nearly avoids it. Williams and Moses get tagged in and we get these two men trying to out punch the other one. Williams is focused on Moses’ arm as he traps him on a triangle with Moses’ arm dangling over the ropes as Williams draped upside down on the outside of the ring. Rhett Titus got the tag as he continued to focus on Moses’ arm. Shane Taylor gets tagged back in and delivers a vicious right that sends Lethal through the middle ropes and onto the outside as we head to break.

Back from the break Kaun and Lethal are in the ring as Lethal delivers the Lethal combination to Kaun. Lethal is slowly making his way to The Foundation’s corner for the tag. Rhett Titus gets the hot tag and takes out all of Shane Taylor Promotion. Joe Keys gets a tag and he and Rhett Titus deliver a dropkick, German suplex combination which gets broken up by O’Shay. This leads into pandemonium as all eight men brawl in the ring. Lethal attempts a Lethal Injection but is caught by Taylor and nearly escapes a power slam. Lethal runs the ropes and does a tope suicida to Moses on the outside. Meanwhile, Keys is climbed the ropes and delivers a top rope dropkick to Taylor. O’Shay (who is the legal man along with Keys) delivers a vicious right to Keys and whips him to the ropes only to land a sit-down spinebuster for the three count.

The show closes with Shane Taylor Promotions celebrating in the ring.

While this was a very fun and entertaining hour of pro wrestling, I expected more from a post PPV TV show. While I fully understand that their syndicated nature and taping schedules can make this difficult, I was hoping to have more mentions of the PPV and get some seeds planted for future storylines. Onto next week!