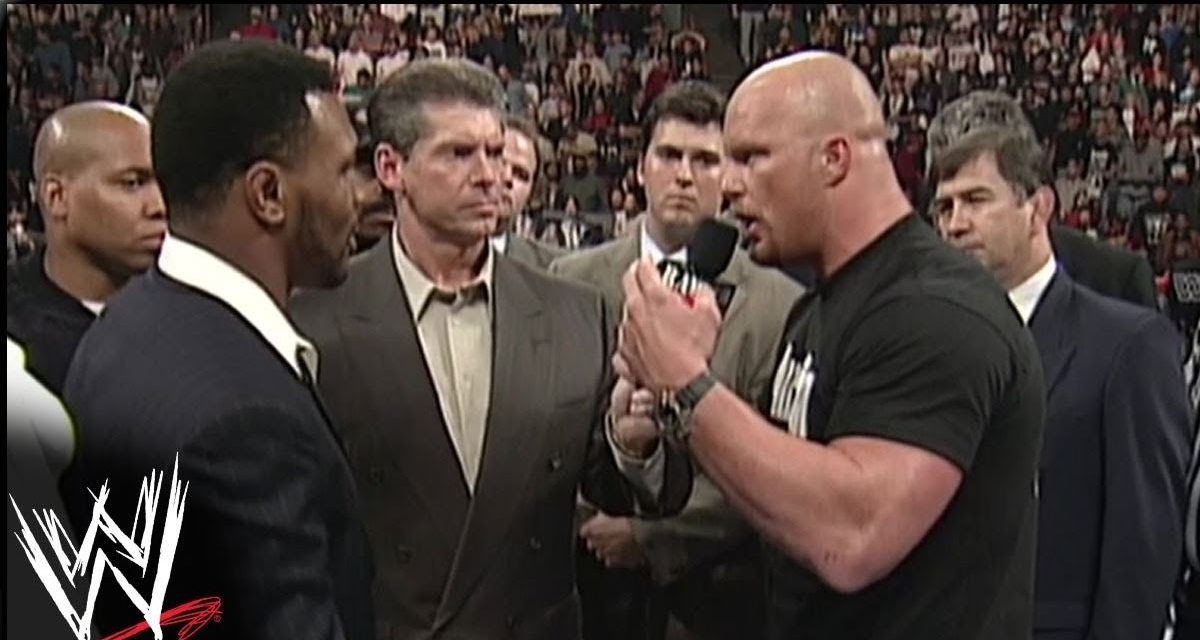 LAS VEGAS – The sound of glass shattering in Sin City? No, it wasn’t a lost plateful of drinks or a down-on-his-luck gambler slugging a window pane in frustration. 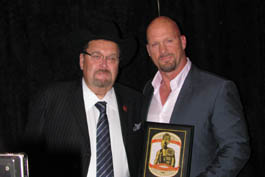 It was a sound that wrestling fans recognize as the entrance music for Steve Austin, as “Stone Cold” made his way to the microphone Wednesday at the Gold Coast Hotel & Casino to accept the highest honor at the annual Cauliflower Alley Club Reunion banquet.

The 47th reunion also saw Ricky “The Dragon” Steamboat win the Lou Thesz Award, while women’s wrestling was high up on the card, as three stars of the 1980s and 1990s received recognition in front of several hundred fans, wrestlers, and industry types.

A regular at recent CAC reunions, Austin introduced a new wrinkle by fielding questions from the audience after his acceptance speech, during which he confessed he was once a fan who threw debris at bad-guy wrestlers.

It was clear that the Texas Rattlesnake, introduced by close friend Jim Ross as “the most amazing persona in the history of our business,” is as unafraid to speak his mind as he was during his late ‘90s, hell-raising heyday.

“The business has changed,” he said after accepting the Iron Mike Award, named for club founder Mike Mazurki. “I don’t think you can sit there and have one guy or two guys, or maybe three guys write promos for a whole host of people that are in the back of the locker room and expect these guys to go out there and learn these promos and go speak them.”

Wrestlers’ words have to come from the heart and the guts if they are to touch fans, “and I don’t think that’s what happening right now,” he said.

In answer to another query, Austin, 47, said the “Stone Cold” side of him would likely have gone unrealized had Eric Bischoff not fired him from World Championship Wrestling following a triceps injury.

He was a traditional good-guy babyface at the time, labeled as “Stunning” Steve Austin by WCW’s Dutch Mantell. “There was no character. That was as far as I thought. … I wouldn’t have come up with it if I had stayed in WCW,” he said.

But Paul Heyman of Extreme Championship Wrestling gave him a forum to start venting his spleen, and Austin took it to the limit as the ass-kicking everyman in WWE. “The best thing I got was touching people’s lives,” he said.

And so strong is the bond between Austin and Ross that the legendary announcer said the Coors Loght beer can they shared at WrestleMania XXV sits prominently on his desk and means more to him than his own WWE Hall of Fame ring. “It will probably be buried with me,” a very serious Ross said of the empty. 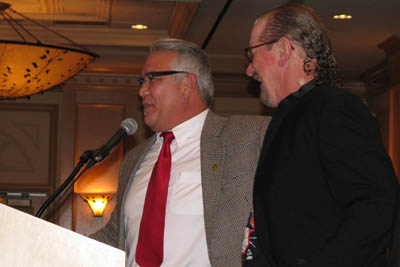 If Austin represented the heroic tough guy to fans, Steamboat was the classic, good-looking sympathetic babyface. “There wasn’t anybody who made you look better than Ricky Steamboat,” said Sgt. Slaughter, who presented him for the award.

Now working as a WWE trainer, Steamboat kept the audience in stitches with a half-hour discourse on the highs and lows of his WWE Hall of Fame career.

When he was fresh out of American Wrestling Association owner Verne Gagne’s school, Steamboat recalled that he was thrilled about a debut match with Mad Dog Vachon that went 18 minutes, rather than the five Gagne called for.

Back in the locker room, Gagne berated him with every name in the book until a low rumble came from the heels’ dressing room. As it turned out, Vachon had been so impressed with Steamboat that he had extended the bout. 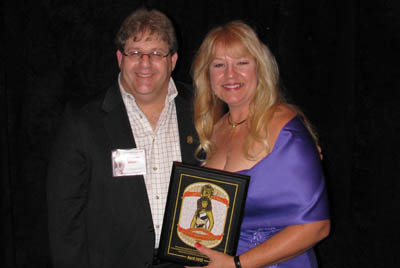 The Art Abrams Lifetime Achievement Award will sit on the mantle of Wendi Richter, the godmother of “Rock ‘n’ Wrestling” and now an occupational therapist in Florida, which she said proves there is life after the lesser pay and recognition accorded much of women’s wrestling.

Richter was at the dawn of a new era when she became WWF women’s champion in 1984, seconded by pop star Cyndi Lauper against old-schoolers Lou Albano and the Fabulous Moolah.

That skyrocketed her into the public spotlight, though the lights quickly dimmed when Moolah retook the title during an apparent 1985 doublecross. Richter alluded to that incident, praising Leilani Kai, Princess Victoria, Velvet McIntyre, Judy Martin and Joyce Grable.

“They were excellent influences. I learned so much from them. And from Moolah, I learned what not to do,” she said.

Richter added that she was rooted in fundamentals. “I am so proud that I won this award based on my wrestling talents and hard work, and not on acting or T & A,” alluding to the bodyparts that form the basis for a lot of women’s wrestling today.

A botched powerbomb was one of the secrets to the success of well-known WWE star Lisa “Ivory” Moretti, winner of a Women’s Wrestling Award.

Mando Guerrero, who had a hand in her training, said he remembered a specific incident when Chyna had locked Ivory in a botched powerbomb, a move that could cause serious damage when executed improperly.

Instead, Moretti kept calm and adjusted on the fly, positioning herself to minimize the effect of the maneuver. “She made me proud that night,” he said.

Moretti, now living in Washington state and active with animal initiatives, said she was scared that she would merely parade around in high heels and scanty clothes during her WWE run, but recalled that she was allowed to show off her real ring skills during “the most wonderful era.”

Martin landed a Women’s Wrestling Award for a hard-hitting career that saw her wrestle around the world, notably as part of the Glamour Girls team with Kai. Frequent opponent Rockin’ Robin Smith said Martin personified “respect and work” during a career that lasted more than three decades.

“I have come to respect the business and the people that are in it,” Martin told banquet attendees.

The 2012 REEL honoree — that’s an award for a TV or movie performer with a wrestling interest—was presented to Dan Haggerty of “Grizzly Adams” fame. Haggerty has 55 movie and TV credits to his name and former wrestler Rock Riddle called him “a legend who also happens to be a wrestling fan.”

For his part, Haggerty commended wrestlers as “gentle giants with big hearts and big shoulders.”

Bill DeMott, known for characters such as the cackling Hugh Morrus and Crash the Terminator, received a Men’s Wrestling Award.

He was also a trainer for three seasons on WWE Tough Enough, work that manager Percy Pringle/Paul Bearer pointed out in presenting DeMott to the crowd. “Thank God for guys like Bill DeMott to teach them the path, the way, and the walk,” Pringle said.

DeMott was brief and to the point in accepting the award, saying, “I was told a long time ago you job is to make the other guy look better. By the honor you have provided, you all have made me look better.”

Wrestler and entertainer Al “Mr. Outrageous” Burke received the Jason Sanderson Humanitarian Award for his countless hours at children’s hospitals, as well as Special Olympics and Make-A-Wish Foundation events. Karl Lauer, the outgoing CAC executive vice president, cited Burke as as example of someone who gives more than he gets.

“If I can put a smile on one kid’s face, it’s worth showing up for,” Burke said.

The Future Legend Award went to Georgia-based wrestler Kyle Matthews, who has worked for Ring of Honor and Evolve, and multiple independent and Japanese promotions. Allen was trained by the late Ted Allen, part of The Nightmares tag team, and has a tattoo of Allen’s mask emblazoned on his left shoulder.

“He was my best friend, he was my mentor, and I know tonight he’s smiling down on me,” Matthews said.