LAS VEGAS – The main meal of the evening may have been cold cuts at the Cauliflower Alley Club Baloney Blowout, but the real deal was a surprisingly touching and emotional roast.

Feted was outgoing CAC Executive Vice President Karl Lauer, who had served the club for 32 years, seeing it grow from 500 members to its current status, with more than 8,000 in the organization.

Having had a recent health scare at his home in Rolla, Missouri — he brought his heart surgeon along as a thank you — Lauer made one last trek to Las Vegas’ Gold Coast Hotel & Casino for an event centred around him.

Past wrestlers and colleagues told funny stories about Lauer, who was a wrestling promoter in Los Angeles for many years, with shows that often featured the lucha libre style.

Traditionally a roast is funny and sometimes cruel, but given Lauer’s health and stature, he was almost given a free ride. There were tales of being kicked out of dressing rooms, making movie deals, forgotten paydays and arguments.

“The Club has really meant a lot to me and my family,” said Lauer.

Recruited by Club founder Mike Mazurki to be the Business Manager, Lauer would often be dispatched by Mazurki with an envelope of cash and instructions not to let the down-on-his-luck party know where the money came from. On one of those trips, Lauer said he visited famed movie star James Cagney, who was a member of the Club, the origins of which were wrestlers, boxers and movie stars. 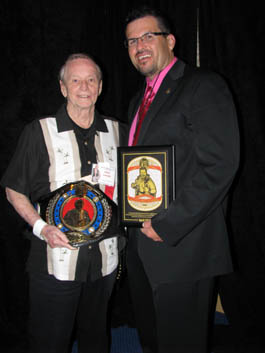 The Men’s Honoree, Active, was Michelle Starr (Mark Vellios), of Vancouver, B.C., who grew up in southern California and knew Lauer from the age of 14, pestering him for information about upcoming shows to write about in his newsletter. Now, 28 years later, Starr was able to thank the man who helped him, as well as the many others who gave him a break. Starr would later become a promoter and trainer in B.C., and many of his past and current students were in the house to share in his moment, including presenter Disco Fury (Nathan Burke).

“In my heart, I still feel like that 18-year-old kid with a dream of being a professional wrestler,” concluded Starr, bringing tears to his eyes and the eyes of his wife, Susan.

Another British Columbia native, Mike Webster, was presented with the Men’s Honoree, Retired, award. Introduced by SLAM! Wrestling Producer Greg Oliver, who helped bring Webster back into the wrestling fold after years away, Webster cherished his time at the podium, cracking wise and wrestling and politics.

Webster warned that it was hard to put the villain away, and that colorful character who went from the CFL’s fields to the ring to work as a psychologist was perfectly comfortable speaking to the assembled crowd of about 400.

A surprise award was given to Kansas City wrestling announcer Bill Kersten. Brought to the stage by eight-time NWA World champion Harley Race, who owned a share of the Kansas City promotion, Kersten said the award was “totally unexpected.”

In 1965, Kersten was instructed to lighten up and come up with something memorable to hook TV viewers early. He still has the voice, and delivered a long, loud, “Hello-o-o-o-o-o-o-o-o-o-o-o-o-o wrestling fans!”

The key to his success, he said, was his “enthusiasm as an announcer.”