Actually the 68-year-old Logue does more than just the Santa Claus shtick — he’s a juggler too.

When he’s not tied up with his part-time gigs, Logue can be found at various get-togethers around town with the informal group of former Hamilton wrestlers. The gang, comprising a dozen or so slow-moving behemoths, includes the likes of Billy Red Lyons, Reggie Love, Knobby McDonald, Pat Blake, Paul Gibson, Cyclone & Hurricane Smith, Roger Francouer, Jerry Dorsey and the ringleader, Ernie “The Executioner” Moore.

Graduates of “The Factory” all. 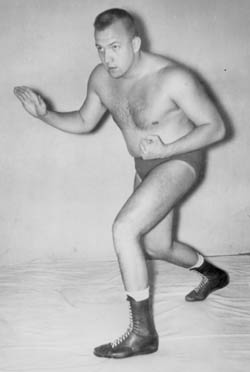 Ron Logue at the beginning of his career.

Logue loves to talk about the past, and Hamilton was often a subject in the dressing room. “[It was the] same deal every time you met someone: ‘Oh, from Hamilton? That’s the Factory up there.'” Logue told SLAM! Wrestling. “‘What, do you have a machine up there to turn out these guys?’ And all the boys were good.”

Like a good number of those Factory grads, Logue got his start under Al Spittles, whose wrestling name was Al Hamilton. Spittles’ first location was a colourful gym where bodybuilders and wrestlers shared space in a two-car garage. The mat would come out at 7 p.m. Spittles helped everyone with the weight-training, and Jimmy ‘Red’ Simms handled much of the work on the mats. According to Jack Laskin, the gym left quite a bit to be desired. “It was a horrible place. You had to be dedicated to want to go to Spittles.” It wasn’t insulated, and had a wood stove to try to keep the entire garage / gym warm. “It should have been condemned a long time ago.” 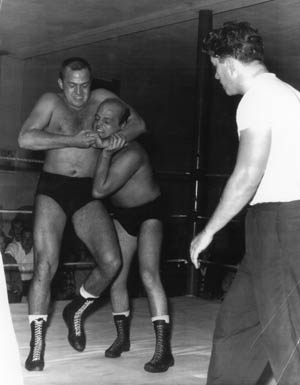 Ron Logue has a headlock on Jake Dennett as referee Lloyd Morris looks on during a bout at Wentworth’s gym.

Eventually the garage was condemned and Spittles opened a new location in the Westdale part of Hamilton.

It was there that Logue got into the business in the late 1950s. “Those guys were tougher than me, they were older than me. They’d rough you up. Then if you came back the next day, they figured, ‘Well, we can’t get away from this kid. He’s going to stick around for a while.’ That’s how I learned.” He considers Benny Lima, a powerlifter and wrestler, to have been his mentor.

Once Logue starts rolling, the memories come pouring out.

“We did a lot of matches at this bar over in Buffalo. It was called Ray Matty’s,” he recalled. “It was a learning experience. You go over there and they had people in the back. I guess they had 200 people they could squeeze in there if they could, maybe less, I don’t know. It was always packed, and people would be drinking beer. The boys would do their stuff. It was one step up from the gym; then the next step was to go to Detroit or go to California.”

Pat Blake, a fellow graduate of The Factory, had words of praise for Logue. “Hell of a worker, you know,” he said of his friend of close to 50 years. “Ronnie’s a good guy, he’s one of the better guys.”

Apart from his real name, Logue wrestled for a while as Hans Von Erich. He never asked the more famous Von Erichs — Waldo or Fritz — for permission. “Those guys, I don’t think, even heard about me doing that. I figured what the hell, I’m just doing the local stuff. I did the German goosestep and bald head.” 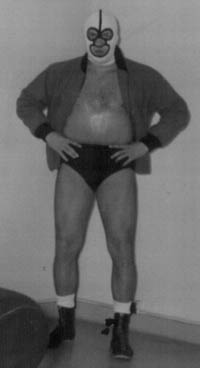 Ron Logue as The Phantom … looking a lot like The Destroyer!

Logue also wore a mask for a while as The Phantom, using The Sensational, Intelligent Destroyer’s mask; “I wrestled him out in California and we got pretty chummy. … I asked him, ‘Can I buy the mask off of you?’ He said, ‘Yeah, I’ve got an extra one here. Five bucks.’ I’ve still got the mask! … It was a lot of fun wearing the mask. I got a kick out of that.”

Logue made it down to California, where he wrestled for a couple of years, as well as a stint in Hawaii under promoter Ed Francis. But he longed for home and headed back to Hamilton.

He found employment as a milkman early in the morning so he could get part-time work with The Beer Store. Eventually that led to full-time work dispensing the suds to thirsty consumers.

At an earlier age, Logue had worked as a bouncer while wrestling on the side. It was then that he met Paul DeMarki, who wanted Logue to teach him how to wrestle. Logue invited him down to the Jewish Center and they worked out on the mat; others there were Knobby McDonald, Pat Murphy, Harley Richardson, Bobby Marshall (Marshall Caplan).

“He was a natural. He had the gift of gab and the girls loved him. He was a real smooth character,” Logue said of the future star, Paul DeMarco. 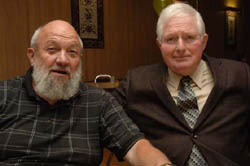 When Paul’s chance came to go to Detroit, he didn’t have any wrestling boots, so he borrowed Ron’s; “I never did get the boots back, because you know what the bugger did? He put his initials on the boots, white leather on top of black leather. P.D.,” laughed Logue.

Though the student would go on to become a bigger star than the teacher, Logue is thankful to DeMarki for introducing him to his future wife. They were working together at Simpsons-Sears, where Logue was the manager of the toy department and he hired Paul for the Christmas season to demonstrate toys. “He had the gift of gab with the people and was always very polite. He had the right attitude,” Logue said. DeMarki brought his future wife over to meet Ron. “It was Christmas time, and she was going around giving everybody a kiss. She came to me and I said, ‘No, no, no. I don’t kiss in public.’ That was the hook. From that point on it was just me and her.”

He soon had to make the choice between wrestling and a family. “We were going to go away as a brother team. My wife — well, she wasn’t my wife at the time, but my girlfriend — she said, ‘Well, if you go away, I won’t be here when you come back.’ I had to make up my mind. I said, ‘Nah, I guess I’d better just do the weekend warrior thing and go over to Pittsburgh and Detroit and do TV for Toronto and Hamilton, local stuff with the other guys. It actually turned out better than had I gone because who know what could have happened.” 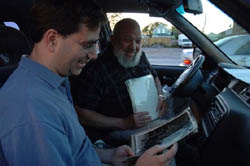 Ron Logue shows some of his old photos to SLAM! Wrestling Producer Greg Oliver in September 2007. Photo by Mike Mastrandrea

Logue has been married for 44 years, with two adopted children. Like clockwork, he’s out every night to help feed his wife, who has been hospitalized for eight years. They were on a cruise together when she started unexplainedly walking into doors and other obstacles. An X-ray revealed a blood clot on her brain. The operation was not a success.

“Two o’clock in the afternoon, I’m shaking hands with the surgeon, and he’s saying everything is fine. Then at seven o’clock, she’s going into relapse and going in for a second operation,” explained Logue. “She didn’t talk for 14 months. From that time to this time, she’s still in a long-term facility. She’s never coming home. They just bungled up the operation, and nobody’s ever taken any responsibility for the mistake that was made.”

With professional wrestling a sideline for most of his life, Logue has no regrets. “You start at the bottom and you pay your dues, then one day, if you’re lucky enough to make the big time, you get the money. But then if you don’t look after it properly, you lose it all,” he philosophized. “What I did on the side, it helped buy a house for me.”