It’s not too many men that contemplate wrestling for three decades. Indeed, many grapplers may wish to wrestle for that long, but few are able to seriously consider it. Jonathan “Fuzzy” Sayers, however, is just such a man. His first pro match was in the summer of 1983 when he wrestled “The Biker” Bernie Burns in Cloverdale, British Columbia. Now, as the year 2008 begins — and after a multi-year absence from the world of wrestling — he is thinking about stepping between the ropes once more. 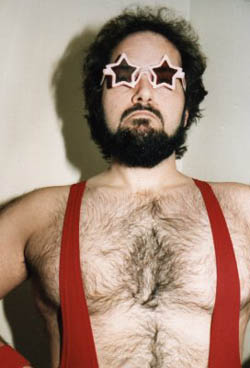 In one respect, it’s not all that surprising. Sayers fell in love with wrestling when he was young. “I discovered it at an early age and it really meant something to me,” he told SLAM! Wrestling. “My parents thought I would grow out of it and that next week I would want to be a fireman.”

Not so much. At the age of 12, Sayers was writing wrestling promoters, asking them for advice on how to become a wrestler. One sent him a two-page letter with words of wisdom, words young Sayers wanted to get to work on immediately. “After all,” he said, “I was 13 years old by then. I didn’t want my life to pass me by.”

It would be a few more years before Sayers was actually ready to become a wrestler. “In this business, you have a lot of false finishes,” he explained. “But with me it was the opposite — I had many false starts.” A series of unfortunate injuries kept him from attaining his goal as early as he would have liked. And even when his training finally began, under the tutelage of Rocky Johnson (The Rock’s father), those injuries continued to hound him.

“Rocky arranged for me to wrestle in front of Stu Hart,” Sayers recalled. “The very next day, I was working with Rocky and he pulled my leg in a leg sweep and accidentally broke my ankle.” It took five weeks for the injury to heal, but when it did, Sayers found himself in the Hart Dungeon. On the fifth day of training with Hart, Sayers’ ankle broke again. “I guess it wasn’t healed well enough.”

Then, while his ankle was on the mend back in Vancouver, he injured his knee. “I honestly doubted that I would ever make my professional wrestling debut,” he remembered. He began to believe his dream was just that — a dream — but realised he had nothing to lose by sending out his resume to some local promotions. It wasn’t too long before his phone rang and the Vancouver-based All-Star Wrestling presented him with an offer.

After working with “The Biker”, Sayers wrestled as a babyface for 14 months. Sensing the need for a makeover, Sayers was turned heel. At the time, his hair was kind of long and styled into a perm. “So the fans immediately started calling me ‘Fuzzy’,” Sayers said. From that, a gimmick was born. “Every time they chanted ‘Fuzzy’, I would go berserk and cover my ears. I even wore a shirt to the ring that said ‘Don’t call me Fuzzy!’ Later, the promoter handed out T-Shirts that said ‘Call him Fuzzy!’ It made for some great TV.” 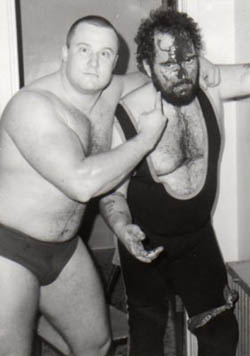 Sayers was to do a run-in during one of Tenta’s matches, but right before the run-in, Sayers was playing poker in the dressing room. He was suddenly informed it was time to hit the ring, so he jumped up and quickly made his way towards the squared circle. “But my pockets were still full of my winnings,” Sayers recalled, meaning his pockets were full of quarters. When John Tenta gorilla pressed Sayers in the ring, all of the quarters fell onto the canvas. “So each time Tenta would lower me to ear level, he would say, ‘Fuzzy got paid in quarters.'” He laughed. “That’s a good memory of a good guy that left us too soon.”

Like all wrestlers, Sayers had his share of fans — those that liked him, and those that didn’t. He remembers one fan from the latter category whose name was Jesse, a woman he said genuinely hated all the heels. “We all knew to stand back if she was smoking, as she would often mistake a wrestler’s back for an ashtray,” Sayers said.

“One night as we wrestlers entered the Arena there was Jesse waiting for us, taking a swing at us with her purse as we walked in the door. This night it hurt more than usual and security checked, found and removed a brick almost the size of the purse itself. She got away with a lot more than most fans would. One night, before my time, security took a cattle prod away from her. Ouch.”

By the summer of 1994 — having accomplished more than he ever dreamed — Sayers started working as a manager and doing some colour commentary. “Vicious” Verne Siebert, another wrestler of that era, remembers Sayers’ sharp-wit and tongue alongside play-by-play man Ed Karl. “He was always saying, ‘There’s a conspiracy here, Ed.’ He had a very different sense of humour; almost sour. His interviews were hilarious.” 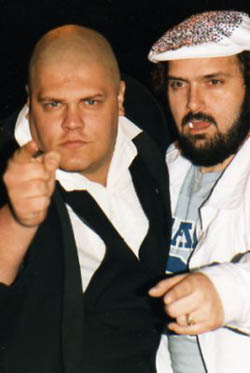 Sayers also got involved in some charity work, guest spotting on the annual Variety Show Telethon to help raise money for kids. It was something that was important to him and was something a special man from his past had taught him was meaningful. “The winner was the kids who the money was pledged for,” Sayers said. “That was one thing Stu Hart often said in the time I spent with him — how important it is to give back to your community. I never forgot that.”

He didn’t wrestle too much more after that and as a new millennium dawned, he began to wonder if indeed he would ever wrestle again. On the one hand, he knew it would be cool to wrestle in three different decades. On the other, he was a lot older than he should be to even be contemplating a return to the ring. Still, the thought nagged at him.

“If I hadn’t had all those injuries, I would have already wrestled three decades in a row,” Sayers commented. “I am hesitant about a return because I don’t want to make myself look foolish. But as far as I am concerned, I believe I can do this as I work out on a regular basis. Simply put, if it is meant to be, it will be.”

For now, Sayers is still mulling over the logistics of such a move. While wrestling in three decades is a feat that has been accomplished by other wrestlers, it would mean something special to Sayers, who admits he has fallen under wrestling’s powerful spell. “Even today,” he said, “I still believe I am only one phone call away from my next match.”

The only question that remains is when — and if — that call will come.