A frequent cliché in the wrestling business is to compare something to a roller coaster ride, for example the emotions of a crowd during a match, or the up and down cycle of the business. In the case of Shawn Michaels, the new DVD compilation Shawn Michaels: Heartbreak and Triumph reveals that the same comparison is apt for both his career and his life.

The three-disc set is the newest in a string of excellent WWE profile sets that focus on a single superstar, following the recent releases on John Cena and Rey Mysterio. Like those, this set starts off with a lengthy interview portion. This one is by far the most interesting of the three, though that’s hardly surprising, given the subject matter. The Heartbreak Kid has had a storied career that has seen him atop the highest hill, spin out of control and crash down at the bottom, and make his way back up again. 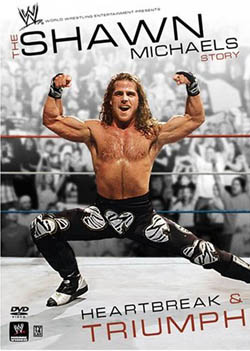 The first disc is devoted to a nearly two-hour interview with comments from Michaels, many of his friends and relatives, and other members of the WWE, including Jim Ross, Chris Jericho, Triple H, Pat Patterson and Vince McMahon himself.

Michaels’ entire career is discussed at length. Some interesting stories are included about his rookie days, complete with lots of clips — including his first professional match. Displaying an almost prodigious talent for the sport, it didn’t take long for Shawn to catch the eyes of different promoters. After a short while, his talents earned him a job in Kansas City where destiny awaited in the form of Marty Jannetty

Jannetty is interviewed at some length about his teaming with Shawn as the Midnight Rockers. Again, the DVD is generous with a lot of footage from the duo’s early days, which is really interesting for those fans who only knew them once they entered the WWE.

Also discussed is the reputation that Shawn earned back then as a partier and a druggie. An initial failure to get into the WWE sent Michaels spiraling into a dark, dark place. Watching Shawn talk about those days, it’s clear that he’s no longer the same person he once was. He’s clearly ashamed about his youthful indiscretions and the immature decisions he made back then.

Luckily, he was able to overcome those demons and eventually he and Marty did make it into the WWE. There, as the Rockers, the team revitalized tag team wrestling. Many stars comment about the Rockers, including Jericho who says they’re still his favourite team, Arn Anderson and Tully Blanchard who faced the duo as the Brain Busters, and even a WWE TV director.

That seems like a strange choice, including a production staffer on the DVD. But it seems to go along with some of the other rarities that are included on the set, in particular the matches. As an example, the never-before-released match where the Rockers beat the Hart Foundation for the Tag Team Championships. This match was taped for a Saturday Night’s Main Event episode, but never aired. The top rope malfunctioned and the match was terrible as a result, so the decision was made to not acknowledge the switch.

Soon thereafter, Michaels started his singles career, and it is this discussion that makes up the majority of the interview portion. Every stage of his career is touched on, and again, comments are included from a number of people. Generally, they acknowledge that Shawn, while one of the most talented wrestlers alive, was a jerk to deal with during this time.

A lot of that was directly related to the power that he and his friends — the Kliq — gained at this time. Michaels somewhat downplays the stranglehold that the foursome of he, Kevin Nash, Scott Hall, and Triple H had in the company, suggesting that any influence they had was deserved because of their drive and ambition and passion for the business. Ted DiBiase, however, doesn’t sugarcoat things, calling them a pain. It would have been interesting to also hear some stories from some of the people who were reportedly held down by the Kliq during this time — for example, Shane Douglas who in the past has said he was a victim of their power, or Jean Pierre Lafitte (Carl Ouelett), or others from that era have said was denied some opportunities. However, it’s not surprising that this didn’t happen.

In any event, a lot of HBK’s storylines revolved around his Kliq, and his feuds with Kevin Nash and Scott Hall are delved into quite deeply. However, none of their matches are included in the collection. While this may seem like a bit of an oversight, it’s actually a good thing. His famous matches with those men were generally on the bigger pay-per-views and can already be found on other compilations — so including them again would make this set seem like kind of a ripoff. In fact, only two matches in this set taken from one of the big four pay-per-views: a Rockers match against the Orient Express from the 1991 Royal Rumble, and the 1995 Royal Rumble match where Shawn entered first and went on to win.

Most of the other matches came from deeper in the WWE vaults, and while they may be less famous, are some of Michaels’ highest quality matches from that era. In particular, three highlights are a pair of matches against the British Bulldog from 1992 and 1996, and an Intercontinental title defense against Jeff Jarrett from a 1995 In Your House.

All the highs and lows from that period are touched on, including Shawn’s suspension for steroid use (which he vehemently denies), the Iron Man match between he and Bret Hart where he won the WWE Championship, the infamous “curtain call” incident, and Shawn’s role in the Monday Night Wars. It’s a very interesting look at the scenes behind the curtain from wrestling’s most successful era, and it’s worth a look.

Of course, any discussion about Shawn’s career would be incomplete if it didn’t talk about D-Generation X. Which ultimately leads to the topic that will never die, the Montreal Screwjob at Survivor Series 1997. Rather than close the book once and for all, the interviews — and in particular, the comments made by Triple H who still seems very angry with Bret Hart about the whole thing — suggest that this one will never die.

The last third of the interview portion is dedicated to Shawn’s retirement, his rebirth, and his return to in-ring action. His candid stories about his downward slide after his retirement, and his subsequent climb back up, guided by a newfound love and religious awakening, are very emotional — remember the roller coaster ride metaphor from earlier? That’s what it’s like.

Most of Michaels’ last few years are touched upon to varying degrees, with the exclusion of his matches with Chris Benoit (understandably) and his feud with Kurt Angle — though, interestingly, his reunion with Marty Jannetty is mentioned (and their match with La Resistance is included), and it was Angle who brought Jannetty back to begin with. The Elimination Chamber, his Wrestlemania match with Chris Jericho, his feud with Hulk Hogan, and the bad blood that still seems to be between them, his feud with Vince McMahon, the DX reunion, and his WrestleMania 23 match with John Cena. What’s unanimously the view from all involved is that each one of those matches was infinitely better because Shawn Michaels was in it. As proof, the set includes his entire 58-minute rematch with Cena from RAW in April 2007. That was one of the best matches of the year, and that’s only a sample of what Michaels can do.

Shawn Michaels: Heartbreak and Triumph is a very well done package on one of wrestling’s greatest stars of all time. The interview is comprehensive and insightful, and the 14 full matches included offer an excellent cross-section of every period in HBK’s career. The set isn’t necessarily perfect — there are other matches that I would have loved to see on there, including his IC title match against Jannetty from RAW, his match against Owen Hart where he suffered his “concussion”, or any of his matches against Mr. Perfect. But those minor complaints aside, it’s certainly a worthwhile purchase, and definitely one heck of a ride.