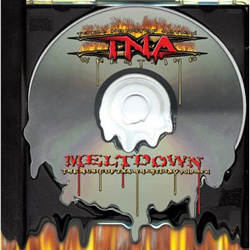 With the recent Meltdown: The Music of TNA Wrestling Volume 2 coming out, the bar has been raised again as this compilation contains far more songs and songs for newer talent and tandems like Judas Mesias, the Motor City Machineguns and, gulp, even Pacman Jones and Frank Wycheck.

Produced and written by Dale Oliver and Serg Salinas with Gearz performing the tracks, this CD has 18 current entrance themes recorded and engineered at Oliver Twist Music Studios in Nashville. Marc Predka write Angle’s theme and Pacman’s was self-written along with Kareen Farmer.

The tracks that stick out as being recognizable at first are the themes for Kurt Angle, LAX (sans Konnan), Team 3D, Jay Lethal, Voodoo Kin Mafia and the Machineguns.

The CD is another step in the right direction for TNA as they inch towards their ultimate goal of seriously competing with WWE. Fans dig theme music and can readily identify the songs with the wrestlers after only a few bars.

If there is one track that could be added to this disc (speaking of digging), it would be Booker T’s, but he had not yet signed with the company until after production had wrapped on this CD. Not to worry, as one can assume Booker’s WWE-esque theme will be on Volume 3, right? Hint, hint, Dale.

The themes pretty much give the listener a visual for the particular wrestler’s entrance into the iMPACT Zone. For instance, in listening to “Gold Metal,” the image of Angle rising from under the ramp is immediately conjured up. And actually getting to hear Petey Williams’ theme is a big plus. Seriously.

Meltdown has a little bit of everything, from somber morgue-like music (Mesias) to a Randy “Macho Man” Savage throwback (Lethal) to the Pacman hip-hop and the classic iMPACT theme from the Thursday night show. It’s an excellent mix and keeps the listener satisfied, even after the themes end and a dueling banjos two-minute lick from Slammiversary is thrown at us as a bonus track.

This CD is what it is. It’s 18 entrance songs for some of TNA’s finest, plus a TV theme and extra banjo duel. If you have a hankerin’ for some good tunes, then this disc is right up your alley. This CD is also the perfect stocking stuffer for any TNA fan. Heck, buy it for any WWE fan, too.