He may not be a household name, but Jonathan “Fuzzy” Sayers has a message that must be heard by all wrestlers and promoters alike.

Sayers, who was diagnosed with hepatitis C in 2005 — and likely contracted the disease many years before his diagnosis — is on a crusade, urging all wrestlers to get tested for the virus and for promoters to stop using blood as a storytelling tool.

“There is an old saying in the business, ‘Red leads to green’,” Sayers told SLAM! Wrestling. “[To promoters,] don’t ask any of your wrestlers to draw blood in any match no matter how important a match it is or how much money it may draw.

“To the young guys out there, don’t buy into it. If I can save one wrestler from the mistakes I made, this will be a success.”

Sayers felt the need to bring his pleas to the public after reading the recent Sun Media feature about Devon “Hannibal” Nicholson and his battle with hepatitis C and how it cost him a shot at his WWE dream.

“I went through several emotions as I read the Hannibal story,” Sayers said. “First and foremost was anger. Up until watching his story, I had no idea where I got the disease. His story and Superstar Billy Graham’s made me start to connect the dots. After anger came some acceptance that I finally knew how I got this deadly disease.

“It touched me very close to home. It made me put my whole life and eventual death into perspective.”

Superstar Billy Graham had his first liver decimated by hepatitis and was the recipient of a liver transplant in 2002, which added years to his life. Graham’s second liver has also been ravaged by his hepatitis, which he continues to battle. 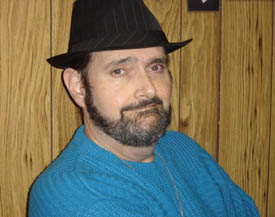 A recent photo of Jonathan Sayers.

Sayers is at Stage 4 of the disease and as he says, “There is no Stage 5.” He now suffers from cirrhosis of the liver and his own fight consists of a lack of energy, weight loss, periods of weakness and pain, loss of sleep and appetite and even tremors in his hands.

“I’m getting close to the end of the road,” Sayers said. “It doesn’t get any worse without going into liver failure. Luckily we have not reached that point. I have undergone conventional treatment for almost a year which almost killed me and almost cured me. I do say almost cured. I have a very stubborn case and they are now looking for experimental treatments for me but have not found anything yet.”

When he was diagnosed with hepatitis — through some blood work, as part of an annual physical — his specialists estimated he could have been carrying the disease for two to three decades, as hepatitis can remain dormant in an infected person for long periods of time without any symptoms occurring. Two to three decades prior, leads Sayers back to his days as a wrestler and to his biggest and bloodiest battles. 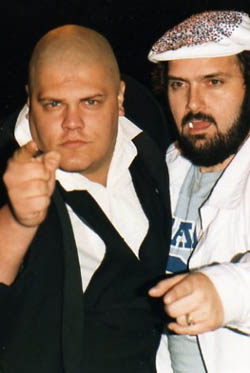 Through his years inside and out of the ring, Sayers participated in a number of bloody matches. Even one of the few YouTube clips that exist of Sayers wrestling career shows him with a crimson mask.

These conditions, such as being in the ring with another wrestler while each performed blade jobs and bled, causing the co-mingling of blood, could have led to his hepatitis contraction.

“Hell during the ’70s and ’80s, a promoter asked you to [blade] and you did it,” Sayers said. “I figure there may be wrestlers out there who are infected and have no idea, so go to a doctor and get checked out. Hannibal found out he had the disease when he was about to sign a lucrative contract with the WWE. They sent him for a physical and you know what the results were.

“The reason I want to make my story public is to save and educate young wrestlers from making the same mistakes my generation of wrestlers made and if you have been involved in this practice go see a doctor and get checked the sooner the better.”

Sayers can’t say for certain who he contracted the disease from and what percentage of the wrestling population may be carrying hepatitis, but he’s not alone in tackling the disease.

Some of the biggest superstars of the ’70s, ’80s and ’90s have been diagnosed with hepatitis, including Bob Orton Jr. and Sean Waltman (aka 1-2-3 Kid, Syxx, X-Pac), among others. Both Orton and Waltman have lost work with major organizations, partly because of their hepatitis.

At the WWE Armageddon 2005 pay-per-view, Randy Orton faced The Undertaker in a Hell in a Cell match, which featured constant interference from the elder Orton. Despite carrying hepatitis and informing John Laurinaitis — who was putting together the match — of his condition, the match went ahead, as scripted, with Bob Orton bleeding heavily at the hands of the Undertaker.

When the Undertaker found out about Orton’s hepatitis, he was furious and rightfully so. Orton was released from his WWE contract a couple months later.

In Waltman’s case, the former WWE and WCW star, missed a scheduled booking at the TNA Lockdown 2010 pay-per-view, where he was set to team with Scott Hall to face Team 3-D in a St. Louis Street Fight. Waltman later claimed he missed the show as a result of the athletic commission in Missouri not clearing him to wrestle, due to his hepatitis. Like Orton, Waltman was released soon after this incident.

With these examples in mind and the tragic story of Devon “Hannibal” Nicholson coming out, Sayers words of warning should not be dismissed lightly. As Sayers says, “It’s a matter of life and death.”