Best known as “The Barefoot Contessa” for her lack of footwear, Judy Grable was one of the highest-flying of the women wrestlers of the 1950s and 1960s. In May, she gets her due, and will be inducted into the Professional Wrestling Hall of Fame in Amsterdam, NY. 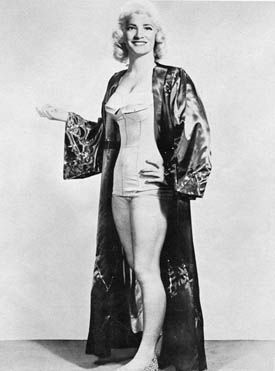 Nellya Baughman was born in Bolivar, Tennessee. She was the youngest in the family, with four older brothers and a sister. “I might as well have been the only girl,” she said in 1964 interview. “The last four years that I was at home my oldest sister was married, and my two oldest brothers were in the service.”

A tomboy growing up, fishing, hunting, and playing sports with her brothers, Grable claimed to have wrestled a little at Grand Junction High. After her family moved to Sarasota, Florida, she became fascinated with the circus.

“Every day after school I would hurry over to the grounds and watch the performers going through their routines,” she said in 1964. “It wasn’t too long before the group sort of adopted me. Those circus performers are wonderful people. You have to be close to them and learn just how wonderful they are.”

Grable would spend six months employed as an acrobat with Ringling Brothers. “It was after I fell off the high wire that I decided wrestling was for me,” she mused. “After all, in wrestling you have something to grab hold of.”

Debuting around 1953, after training with Buddy Lee and his wife Fabulous Moolah (Lillian Ellison), she worked early as Peaches Grable. The blue-eyed, 5-foot-6, 137-pound dynamo made a name for herself with her in-ring action as much as by her looks. “She has developed an amazing acrobatic routine, replete with flying legs, fancy combinations such as cartwheels and drop kicks, and a specialty of the house with which she finishes off her opponents, a hold she discovered and calls the Kangaroo Flip,” ballyhoos a 1963 Wrestling Revue article. “It all adds up to an aerial attack of blazing intensity, meant to dazzle the audience and stun an opponent. She is tremendously successful at both.”

Grable was almost always a heroine, but women’s wrestling wasn’t all cut and dried, good versus evil. “To tell you the truth, girls wrestling comes close to being a good, old-fashioned street fight,” she explained once. “I always go out there with the idea of landing the first punch because I think that’s important.”

It was only natural that the blonde oppose the brunette, the famed Fabulous Moolah. Here’s an account from a 1957 bout in Odessa, Texas: “Barefoot Judy kept the ever-loving fans screaming with joy as she beat a tattoo with her feet on Moolah. Moolah kept kicking Judy where no pretty lady should be kicked and the two girls demonstrated the best rough and tumble wrestling seen here in months. Judy kicked Moolah through the ropes into the appreciative laps of ringside spectators, adding to the general uproar in the Coliseum. Big Train Clements, referee of the night, was kicked, slugged and scrambled over by the girls to the delirious delight of the applauding audience. Moolah took the first fall, standing on the petite blonde’s fluffy hair, but Judy came back to win the second and third falls, and the hearts of the crowd.”

In her autobiography, Moolah called Grable a friend, and Moolah and her then-husband Buddy Lee broke Grable into the business. “[S]he was a shy, naïve girl out of the ring. But inside the ring, she had some talent. They called her the ‘acrobatic blonde with the educated flying feet.’ They called me a lot worse than that, never mind that I’d taught Judy a lot of those flying moves.”

Princess Little Cloud (Dixie Jordan) backed up Moolah’s assertion, recalling Grable as a hillbilly girl from Kentucky who was “a natural athlete” and could fly like Argentina Rocca. “She was party queen when I met her. She’d already been wrestling,” she remembered. “Judy Grable had a little child that she traveled with for a while. In fact, she had already been a mother when I met her, and I don’t know who was taking care of her baby, probably her mom.”

Her natural good looks and friendly personality led to Grable appearing on the high-profile quiz show What’s My Line?, circa 1957, clips of which still exist on YouTube.

Injuries were a part of the business, she once explained, having broken both ankles and dislocated several vertebrae during her career. “It’s a strange thing about getting hurt in the ring.” Grable said. “You get so worked up emotionally, that you don’t notice the pain. The first time my ankle was broken, I wrestled on it for two months; it wasn’t until I awoke one morning to discover it had swollen almost the size of my thigh that the fracture was finally revealed.”

Her career wound down in the late 1960s. In a 1967 column in The Ring Wrestling, Nat Loubet spread the word of Grable’s retirement: “Word reaches us that Judy Grable, one of wrestling’s all-time greats among the women mat stars has married a serviceman and retired from the ring. We hope that she will reconsider since her friends among the fans are legion and her loss to wrestling will leave a vacancy that will be hard to fill. In her recent matches Judy apparently was more of a villain but to us she will always be a heroine.”

By the early 1970s, Grable had married and settled near Seattle. Her last run in wrestling came with Dean Silverstone’s SuperStar Wrestling promotion in 1974, but only lasted a week; by that point, she had started to wear boots in the ring, however.

With her husband employed as a linotype operator and compositor at the newspaper, Grable raised their children, then went back to school and graduated in 1978, and became a certified nursing assistant, working in a veterans’ home.

“She took care of the veterans for over 25 years,” said her daughter Debbie Davis. “She loved taking care of people that were sick. She used to come home with all these stories from the veterans.”

Davis wanted to follow in her mother’s footsteps, but Betty put her foot down.

“Moolah actually wanted me at the age of 18, but my mom said no,” Davis recalled. “She’s like, ‘Nope, you can’t have my daughter.'”

But the bug remained, and Davis recently took it up at the age of 33 in Washington State. “I always wanted to give it a shot, to actually see what it was like. I’m the only female in mom’s family to carry on her legacy. That’s actually what drove me to get into it,” she said. “I figured if I started out little, I’ll grow. That’s basically what I’ve been doing.”

Working as Debbie Grable, she was able to impress her trainers — she was a natural, they said — and her two kids. “They love it. They think it’s the neatest thing,” she laughed. At the moment, though, Grable is on the sidelines, carrying a third child … a grandchild her mom will never meet.

“Before she died, we got really, really close for the year before she died, because I was helping take care of her. She had diabetes, she had strokes, and she was coming down with a very early case of Alzheimer’s,” Davis listed. “She died at home, and that’s what she wanted.”