Battles with Angle just like Magic vs Bird, says Jarrett

Given that the NBA playoffs are into the final four, it’s natural for Jeff Jarrett to compare his battles in Impact Wrestling with Kurt Angle akin to Magic Johnson and his Los Angeles Lakers against Larry Bird and the Boston Celtics.

“They’ll say to this day that they brought the best, and sometimes the worst, out of each other,” Jarrett recently told SLAM! Wrestling, raving about Angle’s talent as a pro wrestler. 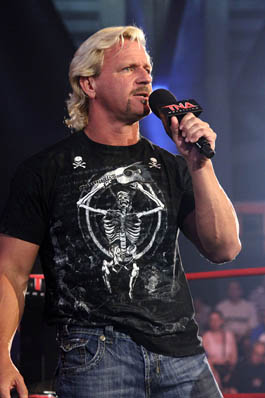 “I think he has all the skills, obviously his ‘it’ factor, his amateur background. He has everything. He has a sense of timing and something that, if you could bottle it, you’d be a billionaire, just because Kurt has it all, and when we step into the ring, the chemistry has been there since day one,” he said.

After the death of his wife, Jill, from breast cancer, Jarrett took two years off from wrestling; when he came back, it was to face Angle.

“There is chemistry there, it’s real electricity. When we step into the ring, we go, we flat out get it done.”

Jarrett has heard the debate over whether the storylines, which have included his daughters and his new wife — Karen — who also happens to be Kurt’s ex-wife, are too personal.

He looks at it from the perspective of someone who grew up in the business, whose family, going back to his grandmother, has been involved in for 70 years.

“There have been a lot of people that have voiced their opinion, both good and bad about this situation,” he admitted. “But if you look back at the history of professional wrestling, the most successful feuds are when people play extensions of themselves, they captivate with real-life situations. People in the world go through divorces every day. The people who have the situations that we have happen to be professional wrestlers that went through personal situations. Is there too much? That’s a very subjective question; one person would answer absolutely yes, and one person would answer absolutely no, and then there’s a middle ground between the two.”

At the Sacrifice pay per view this past Sunday, Jarrett teamed with his wife against Angle and his surprise partner, Chyna (Joanie Lauer). The former Playboy model and Jarrett have a long history from their days in the WWF, including Jarrett dropping the Intercontinental title to her at No Mercy in October 1999.

Jarrett was blown away by the reception she got at the Impact Zone in Orlando.

“You can’t kill a memory,” he said. “People remember her, even though she’s gone through all of her public problems. The wrestling fan just wants to remember those golden moments that Chyna gave them; they sort of forgot about a lot of the past. If you heard the Impact Zone, it was through the roof.”

As the story goes, Jarrett’s WWF contract expired the day before No Mercy, and he planned on heading to WCW with Vince Russo, and made a last-minute deal with Vince McMahon before going out to face Chyna at the pay-per-view.

“The match that took place in Cleveland that night, there was a lot that went into it, and obviously a lot that came out of it. It was sort of a groundbreaking event just on the magnitude that it was done, and the people didn’t forget it,” he reminisced. “Then with the situation that just went down between me and Kurt and Karen, there are some sick people out there in the world that enjoyed seeing a mother of five get hurt, I’ll say that.”

Given Chyna’s addiction issues in the past, and time in rehab, Jarrett did admit that the company did its research before bringing her in.

“In short, several people went into the due diligence,” he confirmed.

This coming weekend, Impact Wrestling brings its show to upstate New York, with shows Friday night in Amsterdam, Saturday in Plattsburgh, and Sunday, with a matinee in Massena.

The show on Friday ties into the Pro Wrestling Hall of Fame induction weekend. Given his history in the business, Jarrett is excited to check out the two-building hall of fame that anchors downtown Amsterdam.

But first he has to get back from Mexico, then home to Nashville, and then on to New York.

“I’m definitely making plans to at least swing by,” said Jarrett, who is scheduled to face Rob Van Dam on the weekend swing.