It has been an emotional month for WWE superstar Christian. His best friend, Edge, was forced into retirement because of injuries, leaving a hole atop the Smackdown roster. Christian jumped at the opportunity, and toppled Alberto del Rio in a ladder match to win the vacant World Heavyweight title at Extreme Rules.

Alas, he lost the title two days later to Randy Orton. The rematch is Sunday at the Over the Limit pay-per-view.

Christian told SLAM! Wrestling that he hopes to keep the emotional wave rolling, and knows Edge will be a part of it, even if he’s not there in person. 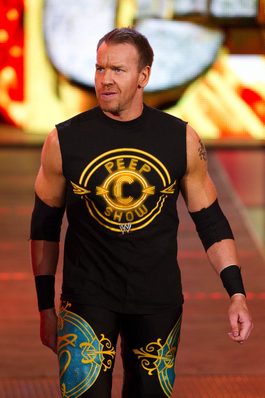 “It was two guys that grew up as fans and broke into the business together. We’ve both gone up and down different paths, and things like that. We were both able to realize a dream. Yeah, it was real emotional. The flipside of that is that unfortunately Edge has to retire, and the landscape has all changed,” Christian said, referring to roster changes and post-WrestleMania fallout.

“I’ve just got to go out and do what I do every night, and that’s go out and perform. I think one of the things that the people, the fans, know about me is that every time I step in the ring, I give everything I have to entertain everyone that’s spent their hard-earned dollars on a ticket for a WWE event. I think that’s apparent. I think that’s what people know about me, that every night I leave it in the ring. I’m just going to carry that emotion away with me and bring it to my matches and all those sorts of things. The rest should take care of itself.”

Christian’s fan base — his “peeps” — is second to none in the WWE.

“They’re amazing. I think it stems from that they know that I work hard. Every time I go in there, I go in with the intention of having a great match. I think it’s apparent that I never phone it in, I never take a night off,” he said. “I think that over the years of that, it’s just kind of built up, this respect thing, which I really appreciate, to have that fanbase. You only get that from years of doing that and putting in the work. The reward is to have a loyal fanbase like I have.”

In the wrestling business since 1995, Christian’s patience has paid off.

“I truly believe that everything happens for a reason. I’ve always believed in myself. I never doubted myself. I just kept pushing forward. Every time you get a chance to go out and shine, no matter what it is, what spot, whatever, go out and shine. When your opportunity comes, take it and run; prove that you deserve that spot.”

Christian scoffs at the notion that he was ever in Edge’s shadow, and that without his friend in the picture, there’s room for him.

“[Edge] got everything he worked for, and he deserved it. He’s one of the best. That being said, everyone takes different paths, and mine was a longer way, for whatever reason. But I never got down on myself, never tried to compare myself — ‘Oh, he’s doing this, and I’m doing this.’ I never looked at it that way, and you can’t look at things that way. You have to look at your situation, and ‘how do I make the best of my situation every single night?’ That’s what I looked to do. I never looked at being second banana to anybody, I never felt that way, ever. If other people did, that’s the way they looked at it, but I never did.”

Though WWE won’t acknowledge it, his brief World title run isn’t his first World title; as Christian Cage, he reigned as NWA World champion on two occasions in 2006 and 2007.

He believes that leaving WWE for a few years helped tremendously.

“It was just one of those things that I needed for myself at that time. I was just worn down from the road schedule, from being on the road for eight years. I just needed to be home and recharge the batteries for a couple of years, do some things with family and friends,” he said, continuing.

“When I left WWE, I always knew that I wanted to come back when the time was right. I felt that I did that. Since I’ve come back, especially coming back from the injury that I had, I feel that I’ve done some of the best work of my career. It’s probably the most exciting time of my career up to this point.”

In early 2009, Christian returned to WWE, and was soon in the ECW World title picture as well. A year later, he spent time on Raw, Smackdown, and mentored Heath Slater on NXT.

But a torn pectoral muscle in September 2010 sidelined him for six months.

“I’d never been seriously injured before, never had to have surgery before. Obviously it was just something I had to deal with. It was a complete tear, so I had to have it reattached,” he explained. “It was a long process of healing and doing the rehab and those sorts of things. You can either sit around and feel sorry for yourself or be proactive about it — and that’s what I did. I wasn’t frustrated or anything like that; those were the cards I was dealt. I rehabbed hard and tried to recover as best I could.”

There was no timeline for a return, and that was on purpose, he said.

“I wasn’t even so concerned with, ‘I’ve got to get back fast.’ I was concerned with getting 100% healed and then getting back. So my goal was, I’d rather take the time and be healed properly and have no issues again with it in my career, than to try to just rush back and re-injure myself and end up missing even more time in the big picture. That’s how I looked at it.”

Christian returned in February, and was immediately thrust into Edge’s storyline with Alberto del Rio, and was at ringside for Edge’s successful defense of the World title at WrestleMania 27. When Edge had to step aside, Christian won the right to challenge del Rio for the vacant title. With a timely distraction from Edge, Christian finally was on top of the wrestling world.

Two nights later in reality, or five days in WWE TV time, Christian dropped the belt in his first title defense, to Randy Orton, who had just switched brands in the annual WWE draft.

The Orton-Christian rematch is one of the feature bouts at Over the Limit, which also includes John Cena vs The Miz in an I Quit match for the WWE Championship, Jerry Lawler vs Michael Cole in a Kiss My Foot match and Rey Mysterio vs R-Truth.

“I think Randy’s track record speaks for itself. I think he’s an eight-time champion. He’s one of the biggest superstars in the industry,” Christian raved. “More than that, I’m a really big fan of Randy as a person and as a performer, so it’s exciting for me. We haven’t been in the ring against each other all that much in our careers, maybe three or four times, but when we do, we seem to have chemistry in there. So I’m looking forward to carry that into Over the Limit, and us putting on an even better match than the one that was on Smackdown a couple of weeks ago. It’s exciting times and it’s huge for Smackdown to have Randy on the show.”

Now a respected veteran at the top of the card, Christian can look over the Smackdown roster and see a lot of talent, in similar spots to where he was 16 years ago.

“Everybody who gets into the business wants to ascend and go as high as they can. You look around the room and you see guys that are 23, 24, the same age that I was when I was first coming in, with the same dreams and aspirations and things like that,” he said. “It’s cool to see that kind of fire in their eyes and the hunger. It kind of keeps me going too. It’s exciting and it’s fun to get in there with the young guys. There’s a good mix, especially on Smackdown and veterans and the younger guys coming up.”

When asked, he named names.

“On Smackdown and the last few Superstars, I think Tyson Kidd has really stepped his game up the last few weeks. I think he’s a really, really great talent. I think Trent Barreta is another guy you’re going to see step up here in the next year; I think he’s really talented,” he concluded, beginning to laugh as he brought up the final name. “Zack Ryder’s carved his own niche with his online stuff, he’s true, his Long Island story. He’s making his own waves for himself. With guys like that, it’s really exciting.”