Mid-Atlantic convention promises to be ‘Super’

When Greg Price started putting together plans for his Mid-Atlantic Wrestling Legends Convention & Fanfest, he was relatively certain of two facts.

First, he believed enough fans fondly remembered the “good old days” of pro wrestling in the Carolinas to justify the event.

Second, he didn’t think the Carolina Panthers were particularly good.

Well, one out of two isn’t bad. 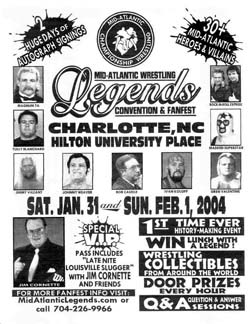 An ad for the reunion

Price’s Mid-Atlantic reunion, some three years in the making, is scheduled for this Saturday and Sunday in Charlotte, N.C., the same weekend that the hometown Panthers will make their first appearance in football’s Super Bowl.

But, from all indications, wrestling fever is likely to be as pitched as football fever with the appearance of three dozen Mid-Atlantic mat legends, many of whom are making rare forays into the public eye.

“Even if the Super Bowl is taking place, I think Charlotte is a big enough town to support something like this,” said Price, a long-time promoter of independent shows in North Carolina.

The convention runs Saturday and Sunday — it ends well before kickoff — and features some of the biggest names in the wrestling business with a nod toward the area’s distinguished history as part of Jim Crockett Promotions.

Among the special events are a late night question-and-answer session with Cornette, and a discussion with Ole Anderson about his no-holds-barred book, Inside Out: How Corporate America Destroyed Professional Wrestling.

In fairness, Price — who does like the Panthers — had few options other than to run head-to-head with Super Bowl weekend. After all, it was the only time that his preferred venue, the Hilton Charlotte University Place, was available.

“Knowing that, I tried to convince myself, ‘We’re in Charlotte. What are the chances that the Panthers will get in?'” he said with a laugh. “Maybe we’ll miss some people, but I’m hopeful about the weekend.”

And Price did have one eye on football’s influence all the time. He initially planned on booking all the heels on Saturday, and lining up the babyfaces for Sunday.

That way, he hoped to attract a female crowd that cared about the likes of the Rock ‘n’ Roll Express instead of football games. Because of wrestlers’ other commitments, that division of labor hasn’t worked out perfectly, but it’s still mostly intact.

The buzz about the convention has surprised him, though. Fans from 24 states and Canada already have purchased tickets to descend on Charlotte. Price, who initially asked the hotel to set aside 32 rooms per night, has now upped that total to more than 100.

Plus, Pride said many wrestlers have told him they are looking forward to seeing old friends and reliving their glory days in the ring.

“It’s taken me a little bit aback,” said Price, who came up with the idea of a Mid-Atlantic reunion after seeing the response to memorabilia shows featuring stars of other sports.

“Over the course of time in promoting different types of wrestling events, the one thing I hear from people, regardless of where it’s at, is that they always have fond memories of the way it used to be,” he said.

Price tested and discarded several plans for a Mid-Atlantic reunion because of poor timing, inadequate facilities, and the general hassle. But, noting that “I wasn’t getting any younger,” he decided to pull the trigger on the 2004 fan fest.

That hasn’t diminished the workload — he has been arranging plans with the hotel, booking wrestlers, selling tickets, handling publicity and advertising, and trying to find pictures for autographs — in short, enduring all the headaches of a promoter.

“I’d say he has spent night and day on this for the past four to six months,” said Greg Mosorjak, the promoter of North Carolina-based SCW Pro Wrestling, who knows Price from the independent circuit. “I know he has had this in the works for a long time.”

Price got his start at ringside, taking pictures for Jim Crockett Promotions in the early 1970s as a high school student in North Carolina.

“Even then, my very first impression was limited,” he recalled. “I didn’t know anything existed in wrestling except the Crocketts and what I saw in the [wrestling] magazines.”

Soon, though, he learned about the independent circuit, and promoted shows in the Carolinas, including some ECW cards, for many years. He counts the late Wahoo McDaniel as one of his closest friends in wrestling.

With the demise of competing wrestling companies, though, he suspects his days as a match promoter are mostly behind him.

“I just don’t think there’s a product out there that can sustain anything without good TV on a regular basis,” he said.

For more information on the convention, visit www.midatlanticlegends.com.