Generally speaking, WWE’s tag team division has seen better days. With only a handful of teams left competing for titles that are seemingly becoming lower in priority with every passing week, an influx of new teams would certainly be beneficial to help bring tag team wrestling back to the prominence that it once enjoyed. The company’s newest contracted team, Rory and Robbie MacAlister — collectively known as The Highlanders, are hoping that they will soon have their opportunity to do exactly that.

When SLAM! Wrestling’s Steve Rennie spoke with the duo earlier this year, they had yet to sign a WWE contract. That dream finally came true, and over the past couple of months, The Highlanders completed the last of their previously-contracted independent dates. Their indy swan song took place at last month’s Blood, Sweat, and Ears show, and SLAM! Wrestling had a chance to catch up with Rory after the show. 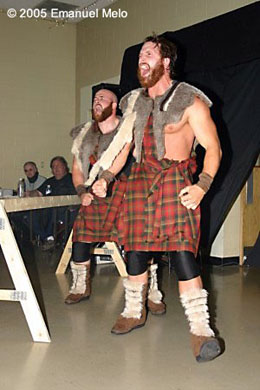 Rory is understandably excited about the contract, which they were offered only five years into their pro careers. “This has been quite the journey,” he says. “(We see joining the WWE) as not the end, but rather a whole new beginning — the beginning of a dream. We’ll see what the future holds.”

Though he doesn’t know yet when the team will be making their TV debut, Rory is hopeful that it won’t be too long. “We still have some work to do, some tightening up to do, and then we’ll go from there. When it comes to wrestling, sometimes you have to play things by ear. We’ve had nothing but good reviews, so it’s looking good.”

What should hasten the process is the fact that the duo have already learned how to wrestle in the WWE style, having trained under Dr. Tom Pritchard back when he was the head of WWE Talent Relations.

“We did seminars with (Pritchard) once a month for about six months,” Rory elaborates. “He’d train us for a couple of days, put us in matches, and then critique them. He’s pretty much the reason we got our spots with the company.”

What is known is that they will not be split up, and will indeed be starting as a team. As noted, tag team wrestling has lost a lot of its shine lately, though Rory believes this is a trend that will be reversing in the very near future.

“In recent years, tag team wrestling has really been moved to the back. From what I’ve seen, that’s about to change rather dramatically, both on the independent scene and on TV. On the local scene, from what I’ve seen, there are a few new teams popping up. I’ve seen a lot more guys now trying to get the whole tag team feel. That involves spending time with each other, studying with each other, traveling with each other, as opposed to just wearing the same type of ring attire and calling themselves a team. On the television level, I believe there’s going to be a lot of changes in the near future.”

Together with Robbie, who was busy signing autographs for the fans who had come to see them one last time in a non-WWE ring, Rory hopes that their future will be a successful one. A young team with some good experience and an existing fan base, he believes The Highlanders will be well-poised for great things in WWE.

“I would like to really be a part of helping getting tag team wrestling back to some of its past glory. When you have a good tag team, it’s a whole different ballgame. Tag team matches, done right, can be the main event. They bring a new dimension to the show, telling different stories from the singles matches. I’m happy to just be given a chance to be part of that.”

No matter what the future holds for the team, they will never forget their indy run, and especially want to thank the fans that supported them thus far.

“The fans have always been receptive to us. We never had to come up with a huge story, they just knew who we were as soon as we walked out to the ring. I’d like to thank everyone for their support, their e-mails, their cards and notes congratulating us. It’s been a great run. Hopefully they’ll stick with us as we go on to the next step.”