The Highlanders — Rory and Robbie — recently took the time to answer questions from the SLAM! Wrestling mailbag. Learn about their influences, their fizzled WWE push, life in Cincinnati, and what it’s like to be an action figure.

Are there any full-time wrestling promotions that you’re interested in working with? [NMars11835] 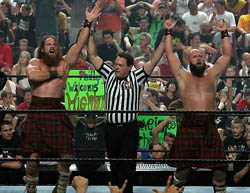 The Highlanders in WWE.

Rory MacAllister (Russell Murray): All of them and any of them. I hate the moniker: former WWE superstar or former WWE wrestler. I’m a wrestler plain and simple. I’m like every other worker, I just want to make money. I’ve been in contact with pretty much everyone and I’ve had some nice discussions, some let’s see what happens kind of discussions and some definitelys, so the future definitely holds something for me. I’ll work for anybody. I’m a wrestling whore!

Have you been contacted by TNA at all? [Marshall Ward, Waterloo, ON]

Rory MacAllister: We have spoken, yeah, on quite a few occasions and we’ll continue to talk. If something happens, it happens and if it doesn’t, it doesn’t. I’ve had some good conversations with them. I’d love to work for TNA. Half the guys I know in the business work there for Christsakes. There’s a whole bunch of guys down there that I’m friends with. I’d love to work there.

Were you disappointed your original vignettes and push were dropped so quickly? [NMars11835] 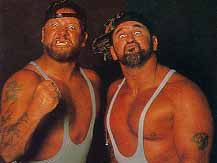 Rory MacAllister: I was disappointed, but not surprised. Before our vignettes even started airing, we were wrestling on the road for quite some time. We’d been travelling around, doing tours for about six months and we were getting great responses. When they decided to go in the direction that they went in, I was pretty vocal against it. I wasn’t a big fan of the whole goofy thing at all. When they decided to make us Bushwackers, we sat down with Vince [McMahon] and his first question was, “What do you think?” I said, “I’ll do it, but I’m not a fan of it.” He asked me, “Why?” and I said “Well, if you do a comedy gimmick, there’s a very definite ceiling on that. If people laugh at you and they don’t take you serious, they don’t believe you can get cash and if they don’t believe you can get cash, they don’t believe you should be in the business.” I had that discussion with him and he was like, “Let’s see how it goes,” and it pretty much played out like I expected it to.

Are there any tag teams that influenced you when you were younger? [Marshall Ward, Waterloo, ON]

Robbie MacAllister (Derek Graham-Couch): I would say the Wild Samoans. Kind of the Bushwackers, as you can tell. Those weren’t necessarily me favourite teams, but we kind of molded to them. As for my favourite teams, it would have been the [British] Bulldogs and the Hart Foundation.

Do you feel it’s hard for tag teams to be as successful as teams like the Road Warriors and Demolition were in the ’80s and early ’90s? [Frank Salemi]

Robbie MacAllister: Oh yeah. It’s hard to be successful in today’s wrestling because, number one, Vince McMahon doesn’t really like tag team wrestling. That’s the understanding we kept hearing from producers and agents and stuff like that. So, right off the gun, you have a blackball against you, if you’re trying to become a main stage in WWE. 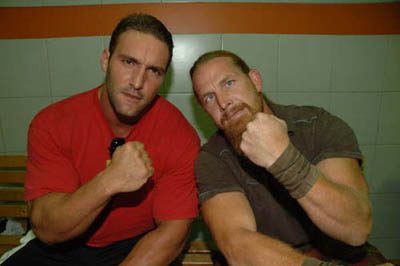 Chris Masters and Highlander Robbie during the Titans in Toronto weekend in September 2008. Photo by Mike Mastrandrea

What was it like being backstage at such a major event, like WrestleMania 24? [Marshall Ward, Waterloo, ON]

Rory MacAllister: There’s really nothing like it, to be honest with you. It’s unbelievable. The sheer enormity, that’s really the part that takes your breath away. That’s when you get a sense of “Wow, I made it.” As far as excitement goes and people being fired up, the Rumble is definitely better, because everybody’s got their part in it.

Mania itself is actually almost boring, because you sit there all day and you’re waiting and you’re waiting and then the adrenaline kicks in and it happens and it’s like “Jesus Christ, that was it!” It goes that quick, the show’s over. It really is pretty special. Two WrestleManias ago, we all did that lumberjack match, so everybody was walking out and you look around and there are 85,000 or 87,000 people and you can’t even hear. There’s just noise and it’s unbelievable. I was getting chills. We all did.

What prompted your visit to TNA on WrestleMania weekend last year? [NMars11835]

Robbie MacAllister: I don’t have an idea! Not thinking clearly.

If you could do it over again, would try not to be noticed on TV? [Frank Salemi]

Robbie MacAllister: If I could do it all over again, I wouldn’t have done it. I would not have been seen there, I would have not gone there. As you know, we were going through a rough time with WWE and I don’t know if I did it subconsciously, like I wanted to get fired. I don’t really know why I did it. Being with my family, I should have thought that this was a bad idea and not once did it really cross my mind.

What was it like meeting big stars and working with Roddy Piper and Ric Flair? [Marshall Ward, Waterloo, ON]

Rory MacAllister: It was awesome. It’s kind of weird, you’re sitting backstage and you’re lacing up your boots and the wrestling fan in you comes out at the weirdest times. You’ll be lacing up your boots and you look over and you go, “Holy *&^%, that’s Shawn Michaels!” Reality hits you all of a sudden. In your head, you’re just going to work, but you see these people you’ve been watching your whole damn life and you’ve been marking out for them and everything else.

Piper was definitely one that took me aback. I have the honour of saying we became pretty good friends. My absolute favourite wrestling experience was when we went back home to Scotland. I hadn’t been back home in about nine years. It was me, Robbie, Flair and Piper and everybody wore a kilt, even Flair wrestled in a kilt. Roddy came up with this huge introduction for us and we came out and everyone went insane. At the end of the match, some kid threw me a Scotland flag and Piper came up to me and gave me the biggest hug and said, “This is your night! I’m not going to spoil it for you.” And he left and I just broke down like a pussy, I started crying. The fact that guy, who’s been in the business for so long, one of the biggest names ever, him and Flair both, came to us and said this is your night and walked away, instead of taking the shine. I thought that was amazing. 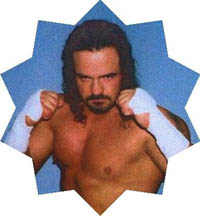 Why have you settled in Cincinnati? [J. Frock, Alberta]

Rory MacAllister: I live just outside Cincinnati, in a little village called Amelia. I was down in Louisville at the time and a wrestler named Sweet Stevie Lee, who was a very good friend of mine, probably my best friend in the business ever, passed away. I went up to the funeral [in Canton] and I met a girl up there. We started talking back and forth and she lived up in Canton, where Stevie lived. She tried to get transferred to Louisville, but the farthest they’d send her was Cincinnati, so we kind of met half way. I also found out that Cincinnati is a hub and almost every flight goes direct to every city in the U.S. It was pretty much for a girl to start off with! Then I fell in love with the city. I absolutely love it here.

What was The Great Khali like personally? [Marshall Ward, Waterloo, ON] 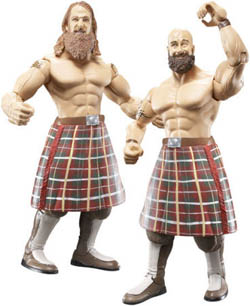 Robbie MacAllister: The Great Khali was a nice guy, but hard to understand. He’s like a big, gentle giant.

What’s it like seeing yourself in action figure form? [Marshall Ward, Waterloo, ON]

Robbie MacAllister: Oh, that’s just unbelievable. I got really excited when I knew we were getting action figures, but the funny thing was the people around me were getting even more excited that I was getting an action figure. I’m one of those guys that you can’t really faze. I don’t really get excited about anything anymore. I’m just more of a laid-back guy and like being an idiot in the ring. But having a wrestling figure pretty much tops the cake of my professional wrestling career because who gets to say that they have an action figure. Who needs a title, as long as you get an action figure and make money selling it! I hooked up my family two years ago at Christmas and I bought about 150 for myself, to sell at indy shows.