SAN FRANCISCO — Todd Bridges, who made his professional wrestling debut on Saturday night, is more than just a runner-up from Hulk Hogan’s Celebrity Championship Wrestling reality show — he’s a long-time fan of the sport.

“I’ve always loved pro wrestling. I had a very high fever in 1973 when I was a kid, living first in the San Francisco Bay Area and begged my mom to take me to the Cow Palace so I wouldn’t miss Pat Patterson wrestling The Great Mephisto (Frankie Cain doing his Sheik gimmick). And it was the greatest live match I ever saw,” Bridges confessed during the show at the DNA Lounge, where he worked in a tag team match in the main event. 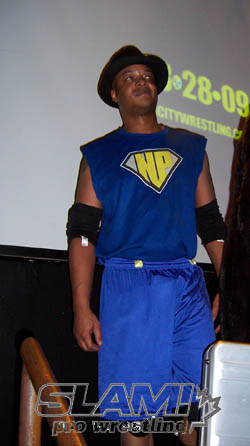 Todd Bridges in his “Mr. Not So Perfect” t-shirt after his debut match. Photo by Mike Lano, [email protected]

“I grew up watching Rocky Johnson, Chief Peter Maivia, Ray Stevens, Billy Graham, Ripper Collins, Luke Graham, all the top stars who worked for Roy Shire. We later moved to Los Angeles so I could get more regular acting jobs. My mom never pushed me to act or anything. I loved it, and thankfully my parents protected and preserved my income unlike so many others.”

In fact, in a world of child stars gone wrong, Bridges stands out as someone who has had his problems, but worked continually through the years, and came out stable.

Bridges was the youngest recurring character in the historic Roots ABC-TV miniseries that won many awards retelling the plight of African-Americans brought into America for slavery. Nearly every top African-American actor appeared in the project and its sequel. He was also on The Waltons and was a regular on the Barney Miller spinoff Fish.

But Bridges’ biggest claim to fame, of course, was Diff’rent Strokes, weekly sitcom on NBC that ran from 1978-1985. Bridges was Willis, older brother to fellow child star Gary Coleman (who was Arnold) and adoptive brother to Dana Plato (who played Kimberly). Coleman’s “What’choo talkin’ ’bout, Willis?” became a popular catchphrase.

The show and its famous child stars were on the cover of Tiger Beat, People and nearly all the celeb magazines at the time. Each of the three actors had some well-publicized problems occur: Plato allegedly overdosed and died in 1999; Coleman alleged that his parents “stole” most of his earnings; Bridges battled cocaine addiction and was acquitted after a trial of the attempted murder of Kenneth “Tex” Clay, a Los Angeles area drug dealer. 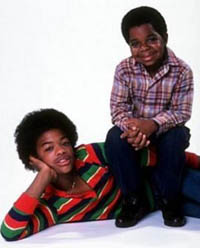 Yet Bridges’ career went on in Hollywood. Most recently, he beat Vanilla Ice on Fox Network’s Celebrity Boxing, hosted his own show on G4 Network, been a recurring character on Chris Rock’s CW network show Everybody Hates Chris, and is a reality show staple.

“The money we make from reality shows that keeps getting dangled in front of us is just too great to pass up,” the 43-year-old actor said. “We’re paid very well, and it’s become a national phenomenon. Many actors are doing it — the stars from The Brady Bunch, Flavor Flav, Snoop Dogg and others.”

Diff’rent Strokes was both a blessing and a curse to Bridges. “People forget that I was a serious child actor both before and after Diff’rent Strokes. It’s rough on any of us getting pigeon-holed and typecast, but since my first acting job in the early ’70s, I’ve never stopped working. And I support my family and two kids pretty well doing it.”

On Hulk Hogan’s Celebrity Championship Wrestling, Bridges was a natural, comfortably fitting in with other big-time fans like Danny Bonaduce (who was such a fan that he would be backstage at Madison Square Garden circa 1973, at the height of his Partridge Family TV show fame, hanging out with Lou Albano, Freddie Blassie and Fabulous Moolah) and Dustin Diamond (Screech from Saved By The Bell).

When Eric Bischoff, one of the producers of CCW, last did my radio show, he said that he thought the guy who would win it would be Bridges. Bonaduce and Diamond did show great skill for doing facials and heel shtick like seasoned pros. But Bridges worked effortlessly as both a face and heel, excelling in each area. 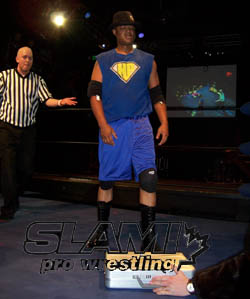 Bridges opts to for briefcase #1 to hit Hernandez.

In the end, however, Dennis “The Worm” Rodman was crowned the CCW champion.

“You know, I still feel I was sort of ripped off by the judges at the Hogan reality show,” complained Bridges. “I really feel I showed everything, worked hard in every area from wrestling, to character development and learning how to properly cut a promo. No hard feelings as we all had a great time. I just feel that I really should’ve won that thing, but Hogan, Bischoff and Jimmy Hart saw it differently. Rodman had already been in wrestling, on that WCW PPV with Hogan and DDP and part of the nWo. That might be why he won, as he was the number one athlete we had and had already done it. I thought the show was actually supposed to be for people who’d never wrestled or done anything like this before. But we all worked hard so the chips fell where they fell. I’m the only one from that continuing on in wrestling though. I really love it.”

To prepare for further matches, Bridges hooked up with the Rick Bassman-run UPW, and learned more under its head trainer Tom Howard. Bridges realizes there are huge gaps in his wrestling education.

“I respect anyone who’s spent their whole life training, or whatever it is. A couple years in a wrestling training school and then a long time at indie shows on the road, putting in their time in front of people starting at the bottom of the card. I’m not trying to take away from that,” he said. “If a promoter wants me and my name as an actor helps sell tickets and brings in new fans who might not otherwise have seen the promotion’s shows like a Fog City Wrestling, I’m glad to help in any way. I’ve done a lot of radio, and other media to help this show sell out.”

The show on Saturday, in San Francisco’s club area, was standing room only. He chose Fog City partly out of respect for its co-promoter Dominick Jerry, who manages as Cesar Black. “To my knowledge, he’s the only regularly-promoting, monthly pro wrestling promoter who’s African-American and he has a very diversified locker room,” said Bridges. “It’s been a dream come true for me and I take it seriously.”

Bridges teamed with Hernandez (of L.A.X. in TNA) and Savio Vega against Late Night Primetime (Rik Luxury, Mr. Primetime, and Vinnie Massaro). The bout ended when Late Night Primetime was disqualified for outside interference. Bridges oddly turned heel, conking Hernandez over the head with a large metal Halliburton suitcase and attacking the referee. It is likely Bridges will be paired with some other heels next show to oppose LAX with Vega. 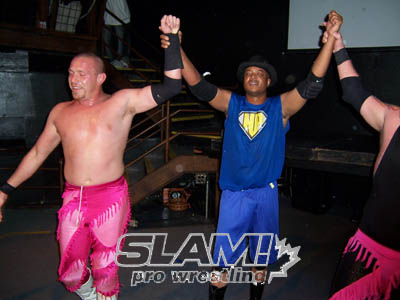 Mr. Primetime and Todd Bridges after the main event.

Backstage post-main event, Bridges got a great response from all the boys (and female workers). Veteran big names present like Raven and Mustapha Saed (from Da Gangstas) and more praised Bridges’ tope and other moves. Other wrestlers, like the Honkytonk Man, who was at the nearby Comic Con convention, called to ask how Bridges did in-ring. Once he got going in the match, most fans said they soon forgot that he wasn’t a pro wrestler by trade and focused instead on the headlocks and armdrags he was doing with reasonable precision.

“That’s the biggest compliment to me with all the butterflies going on,” he said. “The Hogan TV taping was one thing. But here was the real deal, a real wrestling show with fans who paid to be here. I’m not giving up acting or anything. But when I come up here to wrestle, and people think of me only in terms of as being a wrestler, I’ll really feel like I’m doing the pro wrestling business proud. I was happy but still critical at the same time with how I did. So tell me, How’d I really do out there?”

Wrestling has seen many actors moonlight as pro wrestlers in movies and on TV, from Anthony Quinn, Fred “Herman Munster” Guinn, Henry “The One and Only” Winkler to Mickey Rourke currently. In Bridges, fans have someone who appears very dedicated, grew up loving the biz — which is important — and wants to do his best and continue as a wrestler as his time permits.

Maybe Todd Bridges should be the one Rourke introduces to face Chris Jericho and defend legit wrestling legends everywhere this April in Houston at WrestleMania 25.