Emptying out TNA and XPW shows from the DVD bin

TNA and XPW released a couple DVDs recently and it’s time to see what these two promotions have to offer.

The Bound For Glory IV DVD from TNA has a handful of extras that are so-so, while XPW’s Cold Day In Hell reunion show from last May, Season 3 of the XPW TV show and Last Call with Raven and Sandman bring out the best for the hardcore buffs that miss the original ECW, but definitely get their fix with XPW. 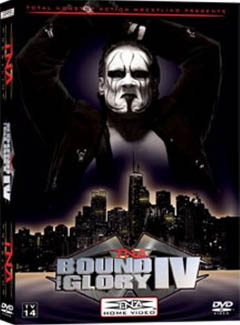 While the show itself, like much of TNA programming, is pretty average, the extras are a bonus perk.

The coverage of FanFest is cool in that Lauren Brooks (she’s hot!) and Jeremy Borash talk to a lot of the TNA roster and get candid comments on what the wrestlers think of the fans. Even Kurt Angle seems genuine in thanking the fans.

A Dixie Carter interview is also part of the bonus features and she discusses how the pay-per-view came to be called Bound For Glory and how much she’s looking forward to the milestone event in 2009. She uses words like benchmarks and thanks the fans over and over.

Another feature is JB conducting post-match interviews with Jarrett and Sting. Jarrett boasts about the show and how far TNA has come in seven years. An out-of-breath Sting also talks to Borash and goes somewhat kayfabe in hyping Joe’s ability and also discusses Ric Flair.

The behind the scenes filming of the BFG commercial, photo shoot and Untouchables-like promos, featuring Joe, the since-departed Christian Cage, Angle, AJ Styles and LAX is also included. This is hilarious. Styles calls himself Sean Connery and says if he ever needs stunt work in a movie that he has his back.

The official theme of BFG, Tarantula by Smashing Pumpkins, gets play along with show highlights, a montage of still photos from the event and the Cross The Line music video.

All in all, not a bad DVD, but nothing over the top and spectacular. It’s getting there, though. 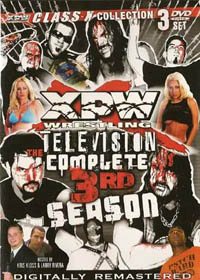 Hardcore stuff at its best and 10 hours of it. Even if it does have a low-budget feel at times, XPW has its following and wouldn’t have made it to a third season of TV shows if there wasn’t enough support. Big Vision Entertainment produces this third installment.

Disc 1, episodes 28-32, is highlighted by a Supreme Messiah Street Fight, with no announcers or introductions, so if anyone knows who these two dudes are, let me know. “Go Funk Youself” (whatever that is) highlights are included and probably the best part of this whole DVD is Kris Kloss and Larry Rivera calling the action. Hayabusa vs. Onita (a very solid bout) is also part of the first disc. Lots of backstage skits, with bad acting, ruin this disc a smidge, but not much. Lots of swearing, too. Even from women. Classy.

Episodes 33-37 are covered in the second disc. Match-wise, Juventud Guerrera vs. Kid Kaos is as good as it gets, while a three-way dance between Sabu, Kronus and Big Dick Dudley hearkens back to their ECW heyday. Highlights (why not the whole matches?) of several matches with stars such as Chris Candido, Damien Steele and Messiah are also shown. Promos and tacky backstage segments are again a major part of disc 2.

In disc 3, we get more Larry Rivera and this guy is just pure gold. He’s what WWE tried to get with Armando Estrada, at least in this reviewer’s eyes. Just three episodes (38-40) are part of the last DVD, but two big standout points are New Jack’s debut and an XPW title match between Sabu and Messiah. The Juventud and Kaos rematch is also an impact match, as is Supreme and “White Trash” Johnny Webb.

Overall, this is just a compilation of the XPW TV shows and there’s really not much more to it than that. To quote a very overused phrase, it is what it is. If only WWE would come out with something like this for the old Superstars or Challenge shows, we’d be in business. But these XPW shows are worth having for the historic and nostalgic reasons. 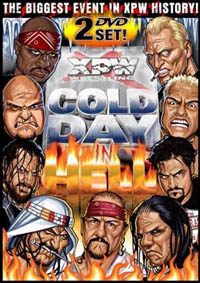 This show was covered live by SLAM! Wrestling’s Kurt Nielsen [XPW return violent and emotional] and eight months later we get to review the two-disc DVD. It is definitely not a letdown as Larry Rivera is gold. Has this been mentioned before?

The first disc contains the 45-minute preview show and thank God, no Jack Korpella here. Just Kloss and Rivera. Woo-hoo! Part of the show is Kaos cutting an epic promo on Vampiro outside of The Dead Sleep Easy movie premiere. Vampiro’s rebuttal is also nice work.

More promos are part of the preview show, including those from G.Q. Money, Angel (a more eclectic version of Goldust), Scorpio Sky, Jack Evans (complete with multiple ‘S’ words), a smoking Sandman (didn’t we miss that in WWE?), Joey Ryan and the epic New Jack. Vince McMahon gets mocked to a ‘T’ by an unidentified dude by having Vince “buy” XPW. It’s great, but who is this guy? Rob Black? Some help please.

The entire card, with the Supreme-Necro Butcher death match the main event, is the second half of the first disc. The theme song, appropriately called Cold Day In Hell is the perfect metal song to go with this event, even if it sounds eerily similar to Vince’s No Chance In Hell theme.

Disc 2 has the Miss Xtreme pageant. Lots of trashy beauties here and that’s not a bad thing. Not at all.

A tribute video to all the deceased XPW stars is a nice touch, but unless you’re an XPW diehard, a lot of these guys are hard to identify. One is evidently Dynamite D and Candido is here, too. The Dynamite D Fallen Heroes Tribute Battle Royal is shown and his mother is at ringside. Apparently, this match wasn’t shown on the Cold Day In Hell pay-per-view.

A sweet promo is Martin Kove (the evil sensei from The Karate Kid) talking about Kaos. Another has Los Cameos Guapos and office promos from Ryan, Trina Michaels and Angel. Good stuff here.

Back on the fallen heroes track, old XPW matches featuring those who have died get some play and there is more good stuff here from Big Dick Dudley, Public Enemy, the Pitbulls, Candido, Kronus and Dynamite D. A definite nice touch.

The best feature of disc 2, according to this reviewer, is the sound files of each wrestler’s entrance theme. Sabu’s is much like his WWE and TNA versions, Evans’ is Boyz In A Box by Insane Poetry and New Jack’s starts off with a Paul Bearer-sounding dude. Nice beat, though. Nice and gangsta. All themes, Evans’ aside, were created by artists from New Age Records.

The last bonus of disc 2 is several trailers for other Big Vision DVDs. Cool. Probably had to be done.

This reunion show, thought by some to be done in response to the new ECW, is a top-notch card and certainly gets the blood flowing in more ways than one. It’s not as good as ECW at its peak, but it is a solid No. 2 for hardcore fans to get their fix. It should belong to any bloodthirsty fan and this hopefully includes SLAM! Wrestling’s own “Bloodthirsty” Bob Kapur.

A shoot interview from Big Vision with Raven and Sandman conducted by Dr. Keith Lipinski (and his sideburns) in a bar the night before Cold Day In Hell, it’s hard to tell when Raven and Sandman are acting and when they are shooting. Raven knows Bob Beamon’s long jump record from the 1968 Olympics and Sandman knows how many feet Salt Lake City is above sea level. Weird. 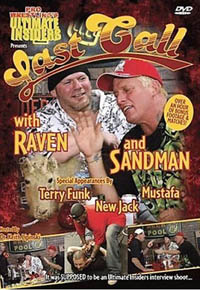 Terry Funk soon interrupts and more stories from yesteryear get tossed around. New Jack and Mustafa, dirty language and all, arrive next. More stories and most from ECW. And all epic.

Basically, this seems like a worked shoot, but it’s still entertaining as hell and New Jack, coked up or not, keeps your attention and makes you raise an eyebrow or two over the course of his rambling. Lipinski winds up an afterthought, but his stuff is generally top-notch.