Lawler sounds off on Unforgiven, divas and passing the torch

For more than a decade, Memphis, Tennessee’s Jerry “The King” Lawler has been the reigning monarch of the WWE announce table. Sitting alongside Jim Ross and recently Jonathan Coachman, Lawler will be broadcasting Sunday’s Unforgiven pay per view live from Oklahoma City, Oklahoma.

“Everybody in Oklahoma City is really excited, but no one more then good ole’ JR. We usually are allotted a certain amount of free tickets but JR has gone way over his limit on this thing — every relative, friend, and member of the Oklahoma Sooners football team is going to be there,” Lawler told Wrestletalk radio Sunday night. There has to be some trepidation for Ross however, as he frequently has bad luck in his hometown. 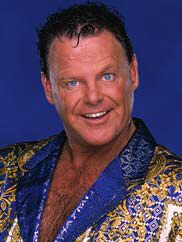 “It is a funny thing we all talk about, there is a jinx for things to take place in anybody’s hometown. The last time I was at a RAW in Memphis I got an RKO from Randy Orton,” said Lawler. “Every time we are in Oklahoma City something bad happens to JR, hopefully we can slide through this pay per view without anything bad happening to him, aside from getting a drumming about Oklahoma University’s (football team.)”

Lawler is a big sports fan, and he and Ross have a friendly rivalry.

“I’ve had to listen for months to Jim Ross about how the Sooners are going to go undefeated and win the national championship. First week out their season was ruined and then they barely squeaked by Tulsa. I’m beginning to think somebody didn’t know what they were talking about when they were pumping them up. They are ok but they aren’t even a top twenty team. On the professional level, I am a big fan of the Cleveland Browns and the Cleveland Indians. When I was just a little Prince before I became a King my Dad had a job that had him transferred to a small town thirty miles west of Cleveland. We lived there for seven years. My first pro baseball and football games were there. When we moved back to Memphis, we didn’t have any pro teams in Memphis at that time. I’ve remained a Cleveland sports fan over the years.”

In addition to sports, Lawler continues to be involved with the Memphis wrestling scene, working with Memphis Championship Wrestling.

“We don’t do nearly as much as we’d like to. We do have an hour-long TV show every other week and taped the next week. We started off trying to run the Memphis Coliseum once a month, but it is tough. The really good talent is going to end up in WWE, so you are left with a lot of guys who are going up the ladder or will never make it to WWE. It is hard to get people out without the big names. We have brought back some legends which draws well.”

Lawler also spends a lot of time doing drawings. His work was featured recently in RAW magazine as well as in Mick Foley’s Christmas Chaos. Discussing his art led the King to reminisce about his feud with Bret “Hitman” Hart, another cartoonist.

“Articles on the King are few and far between in RAW magazine. They asked me a few months ago for samples of my artwork. If I hadn’t had artistic ability I probably wouldn’t be in wrestling today. I first got to be around wrestling by drawing pictures and caricatures when I was a teenager. Bret was probably my most memorable feud with anybody in the WWE. It encompassed the entire Hart Family and was a lot of fun. The one-liners about Stu and Helen’s age, it was an endless source of material. This was literally in the early days of RAW and we would interview Stu and Helen while Bret was in the ring. I can say honestly, still to this day that the ‘Kiss my Foot’ match at King of the Ring was my biggest payoff in the WWE. Jake Roberts was another feud with a lot of material. That was the time when we really just started to push the envelope. How many times are you going to bring somebody’s substance abuse problems into a feud? That was the first time it was done and it was some great material. That feud led to my match with Mark Henry, which was his first match. He didn’t know his own strength. Mark was very green at the time so to try and have a match with him, you had to work around him. I hit the ropes for a tackle, and I went down. I got up, hit the ropes, went down again, and the third time he sidestepped me and swatted me on the back. I was knocked off my feet, sailed clear through the ropes and was flat on my stomach with my face pressed against the old rails we used. Vince McMahon was doing the commentary, and he was looking down at me going ‘eww.’ Mark is something else.”

Lawler considers it an honor to have been in the ring with some of the biggest names in professional wrestling, and to still be able to wrestle today.

“When you have been around as long as I have you’ve wrestled just about everybody. When I was just starting my career I got to wrestle people who were finishing theirs like Lou Thesz, Dick the Bruiser, The Original Sheik and Bobo Brazil. As my career went on, I got to wrestle just about every big name and help a lot of them get started. Our company down in Memphis, which we still run, we produced or helped produce a ton of the major stars that have been in wrestling for the last fifteen years. Glen Jacobs (Kane), one of his first matches was against me, we dressed the poor guy up in an all green outfit and covered him in lights and tinsel and called him The Christmas Creature. I have been really fortunate to be relatively injury free. Most people when you get to be around fifty, your body starts to say ‘Hey I can’t do that anymore.’ Most of the guys who are still working in their 50s have been relatively injury free. Hulk can go out and do what he’s always done. He doesn’t pretend to be the same Hulkster he was twenty years ago. The thing that you can’t take away from guys like Hulk Hogan, Ric Flair and Terry Funk is charisma. It’s something you can’t teach, you either have it or you don’t. Hogan had more of it then any wrestler in history, when he is 75 years old he will still get a standing ovation.”

Seeing the veterans work with the up-and-comers is something Lawler feels is vitally important to the business. Fans will get the chance to see two such clashes Sunday when Shawn Michaels squares off with Chris Masters and Ric Flair challenges Intercontinental Champion Carlito.

” I look at the current WWE and think it is a mistake that WWE doesn’t utilize some of these veterans as much because the young guys could learn from them. At Unforgiven you’ve got Carlito vs. Ric Flair and Chris Masters vs. Shawn Michaels, which is a smart move. People want to say it’s ‘passing the torch.’ I don’t see it as that, but as an opportunity for the young guys to get the rub from people who know what it is all about and have been around awhile. It’s a chance for them to learn and improve. It can only help guys like Chris Masters, who has a tremendous physique and is a good talent, but he is so early in his career he is going to get better and working with guys like Shawn Michaels will only make him get better. We have two guys as champions who would admit they are still babies in their careers to what they are going to be in John Cena and Batista. It is such an early stage in their careers and they are already in the spot they are in, but they will improve and learn as they go.”

Another match at the pay per view will feature Trish Stratus and Diva Search winner Ashley vs. Torrie Wilson and Candice Michelle. Lawler has long been a fan on air — and off — of the female talent in the WWE.

“I have thought about if one group of Divas was better than another. They have come and gone and it’s changed. Some of the most beautiful women are always in the WWE, I can’t think of a time when it has been better or worse. It has been interesting to see how the whole Diva phenomenon has played out. Miss Elizabeth was one of the first females that you might consider a Diva. I think back to when Sunny was the hottest female in wrestling, she had the world on a string, but some bad decisions lead her from the top of the world to where she ended up was sad to watch. The whole Chyna situation, someone else who was on top of the world and it was sad to see where she wound up. It’s scary.”

There has been a lot of change on WWE’s flagship program, with the recent addition of Jonathan Coachman to the announce team and the impending move back to the USA Network October 3rd.

“I got to work one night and they said that Coach was going out there, and I said fine. I don’t know who made the decision or why, just that he has been there. You never can tell what will happen, I think one of the reasons is that Coach did Sunday Night Heat. That show is going away at the end of this month, so this gives him a way to stay on the air. Going to USA is going to be a big plus for the WWE. I am concerned about losing Sunday Night Heat because that was a good lead in to pay per views. USA has so much more exposure than Spike TV, on more cable systems and in more hotels.”

As for what the future holds for “The King,” Lawler hopes to continue his long career in some form with the promotion he has called home since 1993.

“I would like to still be employed in ten years. There are a lot of well known wrestlers behind the scenes in the WWE that people don’t realize work there and are very valuable in helping the show. Guys like Blackjack Lanza, Arn Anderson, Steve Keirn, Dean Malenko, Ricky Steamboat, Ted DiBiase, just tons of big named guys. Once you get into that position your age and experience becomes useful. As far as a on-air talent, well as long as the Fabulous Moolah and Mae Young are on TV, I can be too.”