There are plenty of unsolved mysteries to be solved in the world of professional wrestling. A few examples: Who drove the white Hummer? Whatcha gonna do when Hulkamania runs wild on you? Who better than Kanyon? While none of those burning questions are answered in a new book entitled Mysteries of Wrestling: Solved, other ones are. But the one you might want to really ask yourself is: “Is it worth buying?” And the answer to that one is “No.”

Written by the hosts of the well-known Get in the Ring radio show, Mysteries of Wrestling features a number of wrestling personalities commenting on various matters under the premise of answering the industry’s”deepest and darkest” mysteries. Unfortunately, by limiting the discussions of the wrestling pundits to the questions posed, the book really never takes off, and rather seems forced and constrained. Disappointing, since it could have been really interesting to hear what some of the sport’s stars would have said with no such boundaries. 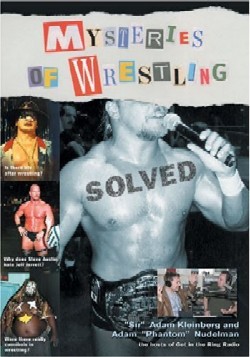 For instance, the book features many quotes from great minds like Shane Douglas, Bobby Heenan, and Jake Roberts. Given an open forum, any of those three could wax eloquently on virtually any subject. However, the book limits a lot of what they have to say to snippets and sound bites, and again, only on the few topics chosen by the authors.

And those topics are a real mixed bag in terms of relevance and interest. The debate on whether ECW was the best promotion ever was entertaining, especially since many of the company’s major players are quoted, including Douglas, Tod Gordon, and Terry Funk. But those are diluted among the comments from wrestlers like Sean Waltman and Diamond Dallas Page who never set foot in an ECW ring. Similarly, the debate on whether or not the Internet has helped wrestling or harmed it raises some valid points on both sides. Wrestling journalists like Dave Meltzer and Wade Keller offer their insights as to how and why the Internet can be used effectively, while some of the wrestlers like Jerry Lynn lament about how the Internet has helped tear down the veil of secrecy, something which he misses. Also of note is the chapter on the role played by referees, if only because it’s a side of things that isn’t often discussed.

However, many of the topics aren’t as compelling. The discussions on whether or not the Kliq had too much influence in wrestling, and the chapter on why Steve Austin and Jeff Jarrett had friction in the WWE shortly before Jarrett departed to WCW don’t seem particularly relevant today. In addition, the “mystery” of whether Hulk Hogan helped Brutus Beefcake’s career hardly seems worthy of a full chapter (in fact, a single “Yes” would suffice). It’s here in particular where the format of the book drags down the reader, since just when a wrestler’s story strays into more interesting fare, the authors sloppily steer the discussion back to the question at hand.While maintaining that control is necessary when hosting a radio show, where air-time is limited, it seems unnecessary to do this when transcribing interviews onto the written page. Or even if it was necessary to limit the page-count, there is plenty of genuine filler that could have been done away with instead of the interviews. For example, the substantial amount of space devoted to sidebar comments by the authors which are, for the most part, pretty lame. While devoted listeners of the show might be familiar with the personas of “Sir” Adam Kleinberg and Adam “Phantom” Nudelman, readers who have never heard the show (like myself) might not find their quips as humourous as the authors think they are.

Personally, I think the book would have been a lot stronger if they would have just published the full text of what the wrestlers said during their interviews instead. That was a formula that seemed to work well in the recently-published WrestleRadio USA: Grapplers Speak, another book written by two wrestling radio show hosts.

Unfortunately, Mysteries of Wrestling: Solved seems to fall under the weight of its own premise. The book had the potential to be very entertaining, but a lot of that potential was lost in the actual execution. Whether or not they’ll try again is a question that only the authors can answer.