Bruce Hart bio a mix of fact and fiction

I was curious in cracking open the latest in the long line of Hart family related books, Straight From The Hart, which version of Bruce Hart would be behind the book. My recent exposure to Hart was through the 2000s era Stampede Wrestling with nonsensical booking and the belief that a low blow was a great finish to every match — even those involving women. Having also seen the smarter side of Hart in his instruction to students and storytelling, I was hoping to see that Hart shine through. 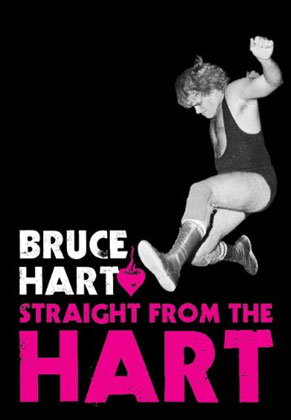 The book lands somewhere in between. There are new stories in the book that add new dimensions to the legacy of the Hart family. However they often get lost in Hart’s bitterness towards the business. The book loses something in Bruce taking constant pot-shots at brother Bret “Hitman” Hart, who he blames for holding him back. It gets annoying and takes away from the overall story.

The early part of Hart’s book — growing up in the family, traveling to Hawaii and Texas, the early days as both a wrestler and booker of Stampede Wrestling — makes for an interesting read. The book loses a lot of credibility in its glaring factual errors, like stating that Chris Benoit was WWF champion in 2001. His story of how he met his wife Andrea contradicts every other version of how their relationship started. Hart says he met her randomly when she helped him change a tire and then she attended a Stampede Wrestling card and the rest was history. The truth, that he met her while substitute teaching at her Junior High School and reconnected later while she was still in her teens, is described in detail in Heath McCoy’s Pain & Passion book.

To best outline the questionable aspects of the book, one has to look no further then in the final chapters when Hart describes pitching a change in the booking of Bret’s Wrestlemania match with Vince McMahon. To his credit, the angle actually sounds decent. The way Bruce describes what happened, McMahon and Triple H actually seriously considered his pitch and it was Bret who squashed it. This is unrealistic both in the idea that they would completely alter the storyline so close to the event and the fact that one of the other main players, Shawn Michaels, was set to lose a retirement match to The Undertaker. With so many mistakes in the book, I found myself questioning how much of Hart’s story that I wasn’t familiar with was also skewed.

Straight From The Hart is worth a read, especially for completists who have already read books from Martha Hart (about her late husband Owen Hart), Bret, Diana, and Marsha Erb’s biography on Stu Hart, as well as McCoy’s Stampede Wrestling book. It is interesting to see his take on events compared to how they play out in the other books. While nothing groundbreaking, like many wrestling biographies, it is best taken with a grain of salt. Amidst the tall tales and truths lies a decent story of the life of the second-oldest son of wrestling’s most famous family.