Foley’s still got the write stuff

For too many years, being mangled and bloodied was part of Mick Foley’s daily routine.

Without regard for his body, the 38-year-old three-time WWE heavyweight champion Foley took on all comers in his chosen career as a wrestler. On more than one occasion, he spit out teeth like chicklets.

Concussions, a broken jaw, broken nose, broken cheekbone, dislocated shoulder, many stitches, an ear ripped off his head and broken ribs are among the injuries Foley wore as badges of honour, all from a career that began in 1983 with a victory over a guy named Kurt Kaufman. 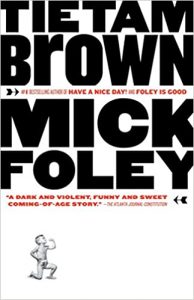 Foley, who also wrestled under the names Cactus Jack, Dude Love and Mankind, hopes there are a few matches left in his burly body — but he’s better known now as a bestselling author.

His latest book, a work of fiction titled Tietam Brown, set for a July 8 release, is dark, moody and humourous all in one — a story of a teenage boy trying to put his violent past behind him.

“I thought I was writing a pretty funny book,” said Foley, who put the story together soon after 9/11. “Some people have been taken with some of the images. But I’m sure some of the people who read Have a Nice Day forgot about the humour and dwelled on the number of injuries I’ve had.

“If people enter this book without a misconception, I think they’ll be genuinely touched. But if their mind is shut off, if they can’t get over that a wrestler wrote this…

“It’s probably like a music critic writing an honest critique on a Charles Manson song on a Guns N’ Roses album. What kind of a critic could bring himself to say he genuinely enjoys it? To many people, I’m not that far removed from being Charlie Manson.”

“I’m always drawn to stories that have likable characters — somebody I can root for.”

Foley says he’s finished another novel. “It takes place in the 1960s in the Bronx,” he said. “In it, baseball serves as a metaphor for life.”

Foley said his recent return to WWE, if only for a couple of weeks, was wonderful.

“It was nerve-racking, stepping through those doors,” said Foley, who turned down two previous opportunities to return. “How would I feel? Would it seem like a big mistake?

“But it helped when I walked in and Stacy Keibler gave me a big hug.

“I’d been away so long, I thought that maybe that part of my life was great, but maybe it shouldn’t be returned to. I guess sometimes you can go back home again.”

“There’s no doubt when I woke up, I was so used to lousy being the norm … my neck, knees and feet hurt,” said Foley. “Only when I was away from wrestling for about a year did I start to feel better.”

Foley wants to wrestle again, but under his terms.

“Taking into consideration that the usual retirement lasts three weeks, I’ve gone well beyond that,” said Foley. “Who would I face? Vince McMahon? That would be a definite. He’s an incredible wrestling character. To pull a match off, you’d really have to pummel him.”

– WWE returns to Montreal tomorrow for RAW. Look for the return of Stone Cold Steve Austin, with Eric Bischoff perhaps taking a week off. The Smackdown! tapings are Tuesday night in Toronto.

– It looks like Mr. America is gone from WWE. And with Mr. America goes Hulk Hogan. It seems like the Hulkster and Vince McMahon have had a series of disagreements.

– With Rowdy Roddy Piper released from WWE, it looks like the Brother Love (Bruce Pritchard) gimmick will replace Piper’s Pit on some house shows.

– Zach Gowen teamed with Stephanie McMahon to beat The Big Show. The one-legged Gowen got help from Brock Lesnar and Kurt Angle.