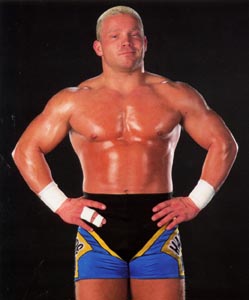 WWE.com and wrestlingobserver.com have reported that Mike Lockwood, better known as Crash Holly and more recently, Mad Mikey, was found dead this afternoon at WWE star Steven Richards’ home in Florida. He was 34.

Lockwood started his career in California, wrestling as Leprechaun Erin O’Grady before joining the WWE in 1999, as the cousin of Bob “Hardcore” Holly. The two frequently battled each other but also went on to win the WWF Tag Team Championship.

He was used mostly as a comedy wrestler, announced as weighing “Well over 400 pounds” despite his small stature and carrying a scale to the ring. His greatest WWE claim to fame was his multiple Hardcore Championship reigns. He was the first champion to adhere to the 24/7 rule and sketches revolving around wrestlers, non-wrestlers, and WWE agents Pat Patterson and Gerald Brisco trying to steal the title from him were frequently a part of WWE programming.

After floating around on Velocity and being unused by the company, they finally found him a role as one of Matt Hardy’s followers, and he began using A.J. Styles’ signature finisher, dubbing it the “Crash Landing.” He was released shortly thereafter, opened “Crash Holly’s School of Professional Wrestling in Salisbury, NC, and and surfaced in NWA-TNA as Mad Mikey, forming a team with Shark Boy.

TNA, Lockwood’s most current employers, posted a message condolence on their website. “TNA Entertainment is deeply saddened to report that Michael Lockwood, also known as Mad Mikey and Crash Holly, passed away on Thursday. Our thoughts and prayers are with Mikey’s family and friends during this difficult time.”

Lockwood was born August 25, 1971 in Anaheim, California. Trained by Jerry Monti, Michael Modest and Ric Thompson, Lockwood made his debut in 1989. He had a long career in the independent scene, including a brief stint in ECW in 1998. His gimmicks in those early days included being known as The Leprechaun, Erin O’Grady and Johnny Pearson. Lockwood also spent time in Mexico in his early days.

While not he was on the Wrestlemania X-8 card, he made the trip up to Toronto to meet and greet fans. He enjoyed interacting with the fans at the event, and applauded the WWF for putting on the fan-fest event. “I think it’s a great thing,” Lockwood told SLAM! Wrestling at the time. “I think it’s the one opportunity that WWF wrestlers really get to be in touch with their fans.”

There is no official cause of death.

— with files from Jon Waldman