Bena, Virginia is hardly a bustling metropolis, and the Abingdon Ruritan Club, sitting quietly across a two-lane highway from the Bena General Store and post office, will never be confused with a major pay-per-view venue.

But a quartet of wrestling legends made the trek to an independent show in rural Virginia last weekend that showed appreciation for wrestling’s past runs deeper than a fad fascination with today’s over-the-top storylines and laser light shows. 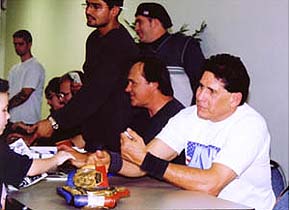 “To see that we’ve been able to stand the test of time for so many people is very nice,” said former WWWF world champion Ivan Koloff. “It’s really gratifying to meet the fans who enjoyed our wrestling.”

Hundreds of fans pressed the flesh with the mat stars at the show and a pair of busy meet-and-greets earlier in the day in the neighboring cities of Virginia Beach and Hampton.

“This is like a dream come true,” an enthusiastic Rodriques Johnson, a long-time fan from Virginia Beach, said as he put his pictures and autographs in order. “For so many years, to see Ivan Koloff, you had to go to the arena. Now, he’s right here in front of me.”

The day-long event was the latest in a series of “old school wrestling” reunions and conventions that are bringing the heroes of yesteryear closer to fans of all ages.

“I just wanted to bring back the old-style wrestling, and let these guys be a resource for the new guys to give them an appreciation of what came before,” said Keith McBride of Virginia-based Satterfield Entertainment, the event organizer. “I have a lot of appreciation for the older guys, myself.”

At the same time, the revival of interest in wrestling’s past appears to signal a deep displeasure with the storylines and marketing of the WWE and owner Vince McMahon.

“I don’t watch it. I don’t care for it,” added Volkoff, a Russian émigré who was a top name in the WWWF as a singles and tag wrestler from the 1970s through the mid-1990s.

Zbyszko chalked up the loss of old style booking and meaningful angles to the fact that WWE essentially has been the only game in town since it purchased Atlanta-based WCW in early 2001.

“It doesn’t have to be gone for good,” said Zbyszko, whose 1980 memorable heel turn against Sammartino shocked fans all over the country. “It’s gone for good right now because you’ve got a television monopoly that doesn’t believe in it.”

“McMahon would rather show you a giant, for some reason dressed in a white shirt like he’s an accountant standing there, not moving, while a 140-pound guy named Eddie sprays him with a ton of sewage.

“But the giant can’t move for some strange reason. He just stands there and lets this little guy spray him with a ton of crap, and we’re supposed to think that’s a riot. Vince doesn’t realize that his entertainment is not entertaining,” said Zbyszko, who occasionally wrestles and frequently plays competitive golf on mini-tours in the southeastern U.S.

Amid the autographs, electronics flashes, and yarns of long ago, the four honorees took the opportunity to deliver humorous and moving messages.

Koloff, familiar in the area from his success in the Mid-Atlantic Wrestling promotion, delivered a short, but inspiring, testimonial drawn from his “Russian Bear” ministry that includes appearances at detention centers, prisons, as well as fundraising events for the Children’s Miracle Network.

Explaining his escape from drug and alcohol abuse, Koloff, who became a born-again Christian eight years ago, encouraged fans to keep their lives in perspective and in order.

“I don’t know who your god is – drugs or alcohol or golf,” he said. “But I do know that since this happened to me, I am on top of the world.”

Volkoff, a bull of a man who usually worked as a main event heel, traced his evolution from a Soviet defector who couldn’t speak English to the comfortable life he leads with his wife of 33 years on a large farm in Maryland.

“All this has been wonderful. I am very grateful for the opportunity I have had wrestling,” he said.

Earlier in the day, Volkoff broke into an ear-to-ear smile when Geeto Mongol (aka Newton Tattrie), his first tag team partner, dropped by to see him at an autograph signing.

The pair formed the Mongols, a monstrous pair of villains who held the WWWF International tag team championship in 1970-1971.

The Nova Scotia-born Tattrie, who now lives in Virginia Beach, recalled Volkoff’s incredible strength – he was a competitive weightlifter in the former Soviet Union – and his impressive ability to crush an apple in his hand.

“You do that in front of somebody, and they’re probably not going to bother you for too long,” Tattrie said as the Mongols shared a tag team laugh.

Santana, 50, a former WWF Intercontinental and tag team champion, donned the tights again to knock off Wallace Stillhammer in a singles match. And he ended the night in a run-in to aid local heartthrob Chris Escobar, who was suffering a beat down at the hands of VCW champion Dirty Money and his entourage.

“I want to show I can still wrestle,” said Santana, an ex-CFL football player (with the B.C. Lions), who is now mainly a coach, teacher, and businessman.

VCW promoter Travis Bradshaw was clearly thrilled at the prospect of getting Santana’s famous “Ariba!” chant going throughout the Ruritan Club.

“I’ve been doing this for nine years and this is by far my favorite part of the business,” said Bradshaw. “It’s about paying respect to the guys who really established this business.”

Which is why Zbyszko, whose feud with Sammartino ended up in a sold-out steel cage match in New York City’s Shea Stadium, told fans he was appreciative of their support even in a small crossroads community in rural Virginia.

“Without you,” he said, “there would be no Larry Zbyszko.”