The year of Neo Spirit

In the honeymoon capital of Canada, fighting spirit is alive and well. In an era when the lifespan of independent promotions barely register a blip on the professional wrestling radar, Neo Spirit Pro (NSP) has quickly earned the reputation of being the little fed that could.

“When we started, we wanted to be that wrestling federation that operates differently than everyone else,” said Jesse Friskey, co-owner of NSP in an interview with SLAM! Wrestling. “We want to run shows that mean something.” 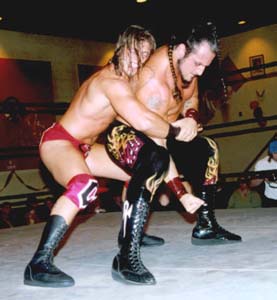 For Friskey and business partner Jesse Scott, the passion for producing quality wrestling shows manifested itself on Saturday, October 25th, as the promotion celebrated its first anniversary show in Niagara Falls.

“We had a really great year,” said Scott, who when in the ring, assumes the role of flamboyant wrestling personality, J.T. Playa.

The vision of creating a wrestling group that would dedicate itself to quality shows actually began three years ago, with a promotion known then as Fighting Spirit Pro Wrestling (FSPW). “Even back then, we wanted to give more attention to story lines then most promotions rather than just run a huge amount of shows for the sake of running shows,” explained Friskey, also a member of the NSP roster, under the guise of Kinkaid.

However, a third partner in the FSPW project reportedly did not share their outlook for the promotion, which lead to a parting of ways. However, Friskey and Scott would not be the only ones moving on as the entire roster pulled up stakes and came together under the current NSP banner.

“That’s something I don’t think has ever been done,” said Friskey. “We heard from a lot of people who said you can’t do it, you won’t be able to do it. In twelve months, we’ve done 18 shows and managed to keep the integrity of the show.”

Maintaining ‘integrity’ has been the foundation on which NSP has built its fan following. With a diverse roster in both wrestling styles, experience, and personality, Friskey and Scott set out and initiated a plan that would give area wrestling fans something not often seen at typical indy shows: wrestlers with depth of character in focused story lines.

“For the most part, we let the guys come up with their own characters,” explained Scott. “In the way we book them, we gave their characters depth. We see something in them, we exploit it.”

That depth is in abundance in NSP, from the incoherent ramblings of newcomer Crazy Steve, the ongoing soap opera between tag team partners Ruffy Silverstein and Marco Malaquias, or the luminous rants from J.T. Playa himself, usually launched with his trademark line ‘Looka here! Looka here! Looka here!’

The result is a tapestry of colorful personalities and sagas to be had on any given NSP show. “You go to any other promotion and it’s basically two guys in the ring,” Scott said, adding that holding regular monthly shows has been paramount to carrying out story lines and thus, keep the fans coming back for more.

“We’re here every month and we know we’re going to get a good turn out at every show. We can build our stories and build the characters. Fans remember when Dangerboy Derek Wylde got piledriven off the ladder. It builds his character. They (fans) still remember that. It adds background unlike other promotions that go into a city for the first time and then never return.”

Story lines aside, NSP have also established a solid reputation for delivering high impact, quality in-ring product from the likes of the aforementioned Wylde, ‘Showtime’ Eric Young and The Hacker. Supported by a hungry roster of young talent and NSP has clearly found a sweet tasting recipe fans thoroughly enjoy.

“It’s an all-around package,” Friskey said, adding that a focused effort to nurture a family atmosphere among the workers and staff of NSP has its rewards. “I like to think that when our guys come here, you will see them do things for us that they’re not willing to do for other indy feds.”

“Out of all the promotions I’ve worked for, this is the one that I’m most proud to be connected with,” said Steele (real name Chris Gray). “I made my start here, I’ve trained with a lot of the guys here, I grew up in the business with all these guys and they’re like a family to me. A lot of people can’t understand that, but if you ask any workers in the back, NSP is a family.”

Steele credited NSP in not only his development as a grappler, but in how his in-ring character has transformed from a one-time comedy worker to his current role as a matured, seasoned professional wrestler.

“I use to be 150 pounds soaking wet,” said Steele, explaining the decision to go with a bumbling comedic personality was in part due to his size at the time. “That was my role in the company and I was really happy with it. I was getting big pops from the crowd doing the comedy stuff.”

Despite the fond memories of pulling laughs from fans, Steele knew it was not a role he wanted to maintain. “It got to a point where that can’t be everything that you are. I had to get into the gym, get in better shape, and think about growing as a wrestler in general. They (NSP) have given me the platform to do that.”

Only adding to Steele’s dedication to NSP is the current dry spell of independent wrestling promotions in Ontario. The fallout from that can be seen in the influx of wrestlers looking for bookings with NSP. “If you have a spot on NSP, you should be happy and proud to work here every month.”

Scott also observed the recent wave of regional talent looking for work with NSP, particularly coming from the non-active Toronto based Apocalypse Wrestling Federation (AWF). “When AWF stopped running, we had almost like a Noah’s Ark effect of guys coming in,” said Scott. “We can only give so many guys so many chances.”

Part of the problem with adding a new member to the roster, again, comes back to the delicate chemistry with the NSP fans as was explained by Friskey when current NWA-TNA star Sinn first joined the promotion.

“When Sinn first came here it probably took our crowd a good four months to get used to him,” he said. “That’s what I try to explain to these people when they come up to me and say they want to work for us. It’s not that we don’t want to have you; it’s just that our fans are not your run of the mill indy fans. There’s something special between the fans and the wrestlers we got.”

A common pitfall some promotions rely on is booking expensive, big name wrestling talent. In NSP, that is something the ownership avoids.

“That by far is the biggest independent promotion killer. It is mind boggling seeing how much those guys want and then you have to pay your other workers,” said Scott.

“We wanted to build a territory with our own guys and we’ve pretty much done that. I really can’t see us bringing in a name. You don’t need names to get the guys over. Have good stories and good matches.”

This year has seen NSP expand it’s brand of wrestling to nearby St. Catharines where the promotion fully intends to use the same formula of stand-out, monthly shows that garnered the die hard fan following in Niagara Falls.

“St. Catharines is a pretty damaged town as wrestling goes,” said Friskey, remarking on a series of professional wrestling efforts that have gone awry in the city. “We want to build the Neo name into something. If you buy a ticket to that show, you know that show is going to happen.”

No effort on the scale of managing a wrestling promotion is exempt from road bumps. While both Friskey and Scott admitted to as much, what remains crucial to keeping their fighting spirit alive is treating everyone who is involved with NSP as family.

“It didn’t matter what it was, at the end of the day I still consider Jesse here a brother to me,” said Friskey. “That’s the key for me. When I look at the guys, its family and we’re all brothers.”