HULL, Quebec — The anniversary season for professional wrestling promotions in eastern Canada continued to roll along this past Saturday night, as the Canadian Professional Wrestling (CPW) promotion celebrated its first anniversary in a big way.

More than a 1,000 plus wrestling fans made their way to the Robert Guertin Arena in Hull, Quebec to take in what turned out to be a night of high flying, hard hitting, and bloody action in the squared circle. For CPW promoter Gino Brito though, the event was a chance to take stock of the promotion’s capabilities to run shows in a major venue.

“There’s always things that we can do better,” Brito told SLAM! Wrestling. “I like to see things run like clockwork like the way I was taught. Everyone was a bit nervous. Besides that, it went well. It’s not like we’re going to come here (Robert Guertin) every week. For a small organization though, we have come a long way.” 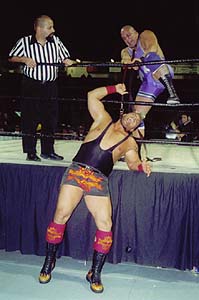 For CPW, the bold step of running a wrestling card in an arena the size of Robert Guertin went a long way in feeling the pulse for professional wrestling in the area. With noted wrestling stars Pierre Carl Ouellet and Abdullah The Butcher participating, the promotion was able to attract a boisterous audience. With the added feature of a large video screen to run interview segments and effects, the event came across as having that big league feel.

The occasion was also a chance for Brito to reflect on his own experiences of having both wrestled and promoted at the arena. “I was telling all the young kids here that the first time I wrestled here, they weren’t even born,” Brito reminisced. “The first time I wrestled here was on January 15, 1963. I had come in from Detroit because they needed some wrestlers. I walk into these dressing rooms and it was like going back in time because nothing has really changed.”

Those past exploits were recognized by CPW with the presentation of a special plaque to Brito. “Personally, I appreciate it, but I hate it,” admitted a reserved Brito, explaining that he would rather see the attention go to the next generation of wrestlers.

“I’ve done my thing. I’ve had the glory, the fun, the money and all that. But, I want the young kids to be the ones to draw the money. I can’t draw you a dime anymore. I want them to have it now.”

The evening also provided a chance to examine the roster and how they performed in front of a large crowd. Brito observed that for some, working in an arena environment can be intimidating. “They’ve never worked arenas,” said Brito, explaining that most of the young wrestlers were only accustomed to performing at the hall used by CPW for their bi-weekly shows in Hull. “I would love to just do buildings like this, but unfortunately right now we can’t do it because the finances won’t allow us.”

One of those workers who had the chance to wrestle on the show was “Mr. Know It All” Shawn Demers. “I’ve done shows at fairs and stuff like that,” said Demers. “As for an arena, in front of this many people, this was the biggest one for me.”

Despite this, Demers admitted that being nervous was not something he was particularly concerned with. “I’m always nervous,” he said. “You gotta have the butterflies in your stomach to go out there. But once you’re out there, the nervousness goes away and it’s time to perform.”

Demers said he is grateful for being a member of CPW and having the chance to hone his craft at the regular shows held every two weeks. “I got to work with a lot of different people and expand my repertoire. The more you’re in there, the better you are.”

In the case of Demers, he was involved in a highly entertaining three way bout for the CPW Cruiserweight Championship. “I thought the match went great,” Demers said, momentarily breaking into his hated “Mr. Know It All” character. “I think the people hated me and that’s great because I hate them too!”

In addition, fans were treated to a wild strap match where Ouellet defeated his arch nemesis, Thunder. In the main event, Wild Dangerous Dan and Abdullah The Butcher slugged it out with Guy Sauriol and his partner Dave Le Justicier that left many fans aghast at the level of violence reached during the confrontation.

Crucial to making the anniversary show happen was the participation of regional sponsors; lead by Molson Dry. “The sponsors were very important. They all came out and helped out a lot. I remember when you could rent out a building like this for $600 a night. Now, you’re talking closer to $5,000 a night,” Brito said.

He remained firm in his belief that the promotion will run another event at the Robert Guertin in February 2004. “We will,” stated Brito bluntly. “We’ll be bringing in some names. We’re talking now with Jeff Jarrett and with a lot of other wrestlers. We have to look at expenses and what we can draw.”