Book in works by Jimmy Hart

You can add Jimmy “The Mouth of the South” Hart to the list of managers writing their autobiographies. 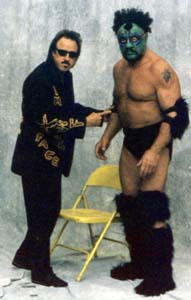 Jimmy Hart and the Missing Link in August at WrestleCon. Photo by Meredith Renwick.

Following the success of Bobby “The Brain” Heenan’s autobiography, Toronto-based ECW Press signed up Hart to write his life story.

Hart was typically jokey about his project when asked about it a while back.

“Yeah, I’m just putting a little book together, I don’t know what it might be called. It might be called Jimmy Hart: Never Trust a Midget, or The Man Behind the Megaphone, or It’s Not As Bad As It Seems. But it’s not going to be knocking anybody or saying anything bad about anybody, so it’ll probably be a boring book,” said Hart.

“It’s going to be about starting off in Memphis in The Gentrys, and all the travels with that. Then working in Memphis of course, with (Jerry) Lawler, and Andy Kaufman and doing all the stuff we did for five years, going to Vince (McMahon) for nine, and WCW and the stuff with Hulk (Hogan) of course, and what I’m doing now.”

According to the folks at ECW Press, the book is still in the editing phase and a release date hasn’t been set yet. “It’s a question of [Jimmy] sitting down with me for two days,” said Michael Holmes, the book’s editor.

Hart’s story really is about more than pro wrestling. “I’ve had a great life. Before wrestling I was in music, I had a million-selling record called Keep On Dancing, I was in a group called The Gentrys. Both of them are the same, you know wrestling and music are so much alike,” said Hart. “With that we toured with Dick Clark, we were on Hullabaloo, Shindig, Where The Action Is, American Bandstand twice, we did tours. Back then they’d put all the bus tours together so I did all the tours – Sonny and Cher were on some of them, The Beach Boys, The Shangri-Las, The Grassroots, The Young Rascals. And after that I got into professional wrestling.”

The impossibly energetic “Mouth of the South” has been entertaining at ringside for decades now, and has been working with various companies over the last couple of years. He has a major appearance on November 1 in the corner of the tag team, The Powers of Pain (Barbarian & Warlord) against the Road Warriors in Frankenmuth, Michigan. But he also dabbled in promoting himself, with the short-lived XWF.

Hart’s XWF had quite the lineup – Roddy Piper, Sable,  Lawler, the Road Warriors, Curt Hennig, Hulk Hogan, Superfly Jimmy Snuka and his son. But it didn’t last. “What happened to us is, we shot 10 shows, but when we got ready to go door-knock the tape was almost obsolete because what happened, Vince, the same day we were cutting it, hired Hulk Hogan, and ‘Mean’ Gene Okerlund, and Curt Hennig and Jerry Lawler. So when we went out to door-knock with our tapes, the people said, ‘Oh, you’ve got all this talent.’ ‘Well, no we don’t. We just lost Hulk, and…’ So it really hurt us on doing that.”

Besides the autobiography, Hart still has aspirations in promoting. “What we’re thinking about doing (now) is we’ve found some other people in wrestling to do something with us, so we’re gonna use the same concept we’re not gonna call it the XWF. I can if I want to, but start fresh again, because we’ve learned a lot from what happened before,” he explained. “We learned to put something together you’d better have the guys signed for at least a six-month deal because if you don’t do it anyone can take your talent and run. But saying all that, I love Vince [McMahon] and them too.”