The first thing that catches your attention about female wrestler Angel Williams is her stunning beauty. Tall, young, blonde, and slender, the 21-year-old Toronto, Ontario, resident has the character traits not of a professional wrestler but of a Hollywood actress. In professional wrestling though, there’s often a downside to such an image. With those particular qualities, it’s almost inevitable to have people labelling Williams with stereotypes. “I guess it is a bit of a stereotype, the way I look, because lots of girls in wrestling are tall, young, blonde, and slender,” Williams told SLAM! Wrestling in a recent interview. She proceeded to outline why she’s not just another stereotypical blonde. 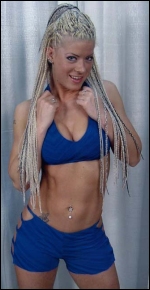 “I have qualities about myself that make me stand out. I have a unique look and can really stand out when in the ring,” said Williams. “So maybe some who aren’t so educated about wrestling may stereotype me and lump me in with hundreds of other girls. But those who are really looking, really watching, and have a good sense for the business will be able to tell the difference.”

Indeed, Williams’ grey eyes ensure that she has a ‘unique look’, as do her numerous tattoos and piercings. “All of my tattoos say or mean, or are angels,” explained Williams. “I have ANGEL written across my right shoulder in Old English Style lettering. I have an angel on the lower right side of my stomach. I have an angel on the back of my left shoulder. And on my lower back I have the Chinese symbol that means angel.” She also notes that she “got a set of wings put around the symbol” of the latter tattoo “about a year” after having it placed. So what’s the fascination with angel tattoos? “I have always had a fascination with angels. I love how they look, I love their innocence, and I love what they represent,” explained Williams. On the contrary, despite the presence of 12 piercings (10 in her ears, one belly button, and one tongue) on her body, Williams claims she doesn’t “have a fascination” with them, rather she “just really likes them.”

More importantly, Williams’ dedication and devotion to wrestling training almost guarantees that she isn’t viewed in stereotypical terms. “I know when I was 18 years old and just getting into the business, a lot of the guys thought I was just some ring rat and didn’t really care to make a life out of wrestling,” stated Williams. “Now I think they know otherwise.” In fact, the three-year veteran in the business recently quit her job because it was impeding her wrestling schedule. “I quit my old 9-5 job because it wasn’t leaving me anytime to do anything really,” she said. “I have wrestling training four days a week, I have shows I have to do that I may need a day or two off for, I have to work out, I may have a photo shoot and so on, and they just weren’t agreeing with each other.” Williams has since started working as a Personal Trainer. “Now, I’m a Personal Trainer and I get to make up my own schedule which is exactly what I need, so it makes things a lot easier on me.” She jokingly added, “I can even sleep now (laughs).”

Angel Williams made her debut in the wrestling business in August 2000 as a manager for ‘Dangerboy’ Derek Wylde on a Hardcore Wrestling Federation promotion. Eventually though, Williams wanted to further spread her wings in the wrestling world, and after training diligently and doing everything the right way, she made her in-ring debut in July 2002.

Williams credits her current trainer, Rob Fuego, with teaching her the essentials of mat and high-flying wrestling. “He (Rob) always mixes it up with all the students in class, teaching everything from chain wrestling to lucha libre high spots,” she revealed. “Rob has been a tremendous help and a huge influence in my career, and I wouldn’t know how to wrestle or do half the things I can do now if it wasn’t for him and his confidence in me.”

The buxom blonde also notes another couple of individuals that have had a strong influence on her education in wrestling. “I also had the amazing opportunity to work a lot of shows with Terry Taylor, and he always gave advice and talked to us and spent time in the ring with us. I learned a lot of valuable things from Terry Taylor, and [BCW/MXPW Owner/Wrestler] Scott D’Amore as well.”

Williams’ hard work and dedication hasn’t gone unrewarded. Throughout her wrestling tenure she’s worked for countless independent promotions, including NSPW, CIWA, MCW, HWF, and Scott D’Amore’s aforementioned company, Border City Wrestling/Maximum Pro Wrestling. Williams simply thrives on working in front of a crowd, although she says whenever she works for BCW/MXPW there’s an added element of enjoyment. She described the BCW/MXPW locker room as “a tight knit family,” and assertively stated that the company’s shows are “definitely the highlight of the month for me.”

“I have been working for Scott D’Amore for a year and a half,” said Williams. “I absolutely love working his shows. I have had the opportunity to meet so many people that are legends in the wrestling business. I have also had a chance to work with a lot of guys I never thought I would work with, such as Terry Taylor, Jerry Lynn, Raven, D’Lo Brown, and so many more.”

Williams also believes that BCW/MXPW is an extremely “professional” federation, and that quality, coupled with the company’s weekly television slot on Cogeco Cable 11, establishes BCW/MXPW as “the number one promotion” in the province of Ontario. “They have TV, and we get to do pre-taped segments,” noted Williams.

“We have dressing rooms and are provided with dinner. It is very, very organized and everyone is spoken to about what they are to do, so no one is left out in the dark or confused about anything. I have also gotten to experience many different roles in BCW/MXPW, such as doing pre-taped segments, being an interviewer, manager, and wrestler. I have gained so much experience and knowledge from being given those opportunities.”

When it comes to choosing what role in the business she enjoys most out of interviewing, managing, and wrestling, Williams said she’s “enjoyed doing all three” because each position has given her the “chance to experience different roles in wrestling.” She continued, “When I first started, I was a manager and at the time, I loved that role. Now that I am a trained wrestler, I just love getting in the ring and having matches. I’m really lucky that I’ve had the chance to try everything. I was a referee once too!”

In light of those comments, it should come as no surprised that Williams when pressed about whether she prefers working as a ‘heel’ or ‘babyface’ declared, “I honestly can’t pick between the two, ’cause they are both so much fun.” She vividly proceeded to outline the enjoyment derived from undertaking both roles. “I love working ‘heel’ ’cause I can just be bratty and bitchy, act like a spoiled little child and yell at the fans,” she enthused. “I love working ‘babyface’ because I get to be the innocent one, smiling and clapping and having a great time. Either way, I’m always having a great time as long as I’m in a wrestling ring.”

Williams’ love for the wrestling business is inherent when she discusses her stint in wrestling. “I would say my greatest attribute is my passion for wrestling,” she revealed.

“I knew I wanted to be in the business since I was a very young girl, and through growing up, my passion and my want for it has just been growing and growing. I think it really says something about a person when they find something they love so much when they are so young and can actually chase that dream and not lose focus,” said Williams, who first fell in love with pro wrestling at age seven.

But her passion for wrestling isn’t her only attribute. “Another attribute would have to be my abs,” stated Williams. “Can’t forget about the abs!” She possesses a firm mid-section which is undoubtedly evidence of her many rigorous work out sessions. Indeed, Williams confirmed reports that she once performed over 1,500 stomach crunches in a 45-minute non-stop session.

Much of her spare time is actually spent working out, although Williams does find time to do some modelling and photo shoots. The alternative and hard rock music enthusiast also loves spending time with her family and friends whenever possible, and playing sports. And finally, Williams loves watching long-lasting comedy program, Saturday Night Live, when time permits. “I first watched that show about eight years ago, when I was 13,” said Williams, “and have loved it ever since.” Saturday Night Live has virtually showcased a who’s who list of Hollywood actors and actresses, so it seemed relevant to ask the Canadian starlet which actors/actresses she enjoyed the most from the programme. “I’m a huge fan of my hometown boy, Mike Myers,” she told SLAM! Wrestling. “I also like David Spade, Adam Sandler, Chris Farley, Chris Rock, Chris Kattan, Will Ferrell and Dana Carvey.”

Even when she’s not physically partaking in wrestling, Williams is always thinking of innovative ways to freshen up her act so the fans stay interested. “I like to mix everything up,” she said. “I am always surprising people with new outfits that get more sexy every time they see me, and also from the way I work in the ring, once again, thanks to my trainer [Rob Fuego], I’ve always got something new and impressive up my sleeve.”

So what keeps her motivated and afloat in the wrestling game? “What motivates me is my extreme ‘want’ to make it in this business,” explained Williams.

“I love wrestling so much, I really do. Working shows are highlights of my life and I wouldn’t trade what I do now for anything. The fact that I have had so much help from so many very important people and I have very high confidence in my abilities motivates me as well.”

Williams has often said her ultimate goal in wrestling is to someday work for Vince McMahon’s World Wrestling Entertainment (WWE). She understands that her strict diet and training regime will need to continue to increase her chances of fulfilling that dream. “I just have to keep plugging at it,” said Williams. “I’m doing the right things now. Like I said before, I’m training four days a week, constantly learning new moves, spots, techniques, and holds. I’m always eating right, working out, and taking care of my body. I just have to wait for my time to come.”

If WWE officials are reading this, look out, there’s an Angel coming in your direction and she’s more motivated and disciplined than ever. Williams just may be one of the best blue-chips in professional wrestling today.

ANGEL TAKES ON:
Gail Kim: “Close friend. A stellar athlete and an even more stellar person.”
Trish Stratus: “Super babe and has improved so much.”
Victoria: “One of my favourites today.”
Molly Holly: “Absolutely beautiful. Phenomenal worker.”
Rena Mero: “My favourite as a teenager.”
Torrie Wilson: “Absolutely adorable. Always has the crowd in the palm of her hand.”
Tracy Brooks: “Close friend. One of the most amazing people I have ever met.”
Precious Lucy: “One tough girl!”
Natasha: “Great girl. Still learning about the business, but picking it up quickly.”