It’s a family affair for the Morgans

Football has the Mannings, Archie and son Peyton. Basketball has the Millers, Cheryl and brother Reggie. Baseball has the Boones, father Ray, son Bob, and grandsons Bret and Aaron. And of course, hockey has the Howes – Gordie, Mark and Marty. And dare we forget the Sutter Brutters, Brian, Duane, Brent and the twins, Ron and Rich. Perhaps no more so than in the world of professional wrestling will you find the tradition of family. The Ortons, Funks, Rhodes, Flairs, Harts, Gagnes, Rougeaus, Vachons, Armstrongs and of course, the McMahons.

Family is a big part of the wrestling world. However, it has rarely transpired into a three-generation enterprise. Recently, though, one proud grandfather, a former professional wrestler himself, and his daughter, also a wrestler, had the opportunity to witness the debut of their grandson/nephew. It was October 2nd, in Vineland, N.J., at the NWA – New Jersey “Eddie Gilbert Memorial” wrestling card, that 16 year-old George Mottola IV, defeated his opponent in six minutes. Lester Morgan and his daughter, Heidi Lee, beamed with pride. 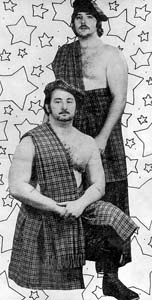 Les Morgan (kneeling) as a part of the McTavish Brothers tag team, circa 1977. Morgan was “Toolie” and Tommy Stanton is “Patrick” (standing).

The Morgans are a hard-working, close-knit family that own and operate a furniture stripping a refinishing center in Newfield, N.J. The business has flourished for 20 years, but the heart and soul of the family revolves around the wrestling business. “I was a neighbour of a wrestler named Billy Darnell,” while growing up in Camden, N.J., remembered Les, 58. “My sister was a neighbor of Buddy Rogers, and every time I saw him, I was in awe.”

Les was trained in amateur wrestling by a wrestler named Doc D’Agonaro, and first began working out at the local YMCA. “We had different clubs in those days. One ‘Y’ would have catch-as-catch-can club, another would have Greco-Roman. I’d go from club to club, learning all the different styles,” he said.

Eventually, Les started lifting weights and putting on a great deal of size. He began training with the original “Nature Boy” Rogers, as well as Karl Von Hess. He began to get steady work, and found himself down south, working in Tennessee for Nick Gulas, where Jerry Lawler was just getting his start. He’s also worked for Jim Crockett Sr. in the Mid-Atlantic area, and in the World-Wide Wrestling Federation for Vince McMahon Sr.

Along the way, Les wrestled some of the legends of the mat game, including Bruiser Brody, Haystacks Calhoun, Nikolai Volkoff, Pedro Morales and perennial WWWF champ, Bruno Sammartino. Perhaps, however his most memorable matches took place with the McGwire Twins, whom he toured with for 16 weeks in the mid-west. “I was one of the few wrestlers who could work with them,” said Morgan, who also wrestled as Dirty Morgan and Toolie McTavish.

Many wrestlers helped his career along the way, and Morgan cites Poncho Valdez, S.D. Jones and Johnny Rodz as being the most helpful. “Let me tell you something, that Johnny Rodz was one tough S.O.B., and he was an excellent worker.”

The one wrestler Les admires the most and considers his closest friend in the business was the late Gorilla Monsoon. “I sorely miss him. He was, by far, the strongest man I ever met. I once saw him pile drive a telephone pole into the ground with several wrestlers, including myself, hanging on to it! Not only that, he was the kindest, most generous man you’d ever meet.”

The Morgans can vouch for that on a personal level. While wrestling in Tennessee, Lester’s only son, Les, Jr. (Affectionately called “Snoopy”), was struck and killed by a car as he was riding his bike. He was 11. The first person to offer help, was the Gorilla. “He handed me a nice sum of money, out of his own pocket. And I turned it down.” Les was a pallbearer at Monsoon’s funeral.

So, after wrestling all those big names for so long, how come Les never became the household name like the others mentioned? “He didn’t get married to travel,” explained Pearl Morgan, his wife of 38 years.

“I could have been a superstar,” answered Les Morgan. “I just didn’t want to travel around the world” and be away from the family.

While wrestling in Tennessee under the name L’il Abner, the family got in on the act. A young 10-year-old girl was brought in to be his valet, Daisy Mae. It was his daughter, Heidi Lee. However, Heidi didn’t exactly get the wrestling bug. That was several years later. “I was at the Spectrum in Philadelphia,” recalled Heidi Lee,” I did a bodybuilding exhibition in the ring. Also, I did a photo shoot with Paul Orndorff, who was endorsing one of our products. Vince McMahon approached me about wrestling, but I didn’t want to do it.”

However, after another posing exhibition, this time at the Pittsburgh Civic Arena, Heidi Lee decided to give wrestling a shot.

“We sent her down to Columbia, S.C. to train with Moolah,” said her father. After a number of matches in small, local independents in the Carolinas, Heidi Lee signed on with the National Wrestling Federation. In May, 1987, Heidi Lee, still only a rookie, became a part of wrestling history. “Wendi Richter was their champion, and we had a pretty good feud going on,” remembered Heidi Lee. That feud culminated in a steel cage match, the first ever between two women, and for the world’s title to boot.

“Definitely one of my career highlights,” said Heidi Lee.

The roll call of women Heidi has wrestled reads like a Who’s Who on the women’s circuit. Besides Richter and Moolah, Heidi has done battle with Lelani Kai, Judy Martin, Bambi, Peggy Lee Leather, Debbie Coombs, Candi Devine, Madusa, and the late Black Venus. Her travels have been world-wide, including tours of Europe, Canada, South America and Japan. 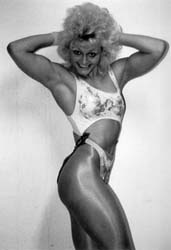 In spite of her light size — 125 pounds — Heidi’s bodybuilding background gave her the physical ability to take on women that often outweighed her by as much as 30 pounds. In addition with the training by Moolah, her father Lester also helped develop her career by building a ring in their shop, so Heidi could practice. There, Heidi developed her high-flying technique with the help of Artie Palmer, who wrestled as Wolfgang Von Heller. “I owe a lot not only to Artie, but to Johnny Rodz as well. After I left Moolah’s, Johnny spent some time with me in his school, teaching me a few things here and there,” she said.

However, in time, another career came calling for Heidi Lee: Motherhood. Heidi and her husband, Archie, are the proud parents of now four-year-old Adrianna. After a while, with calls coming in from promoters to wrestle, Heidi decided to give wrestling another shot. Bad move. In one of her first matches back, Heidi broke her back. “I take full responsibility for it. It was on one of Afa the Samoan‘s shows. Afa told me not to do any high-flying because the girl I was working with was very inexperienced. I didn’t listen. I tried a move, we lost our balance, and I’m in a body cast for six months.”

That essentially ended her career. But it’s not without fond memories. While the steel cage match may be the highlight of her in-ring career, outside the ring, her greatest memories are of the stories many of the old-timers like Volkoff and Tony Garea have of her father. “They respected him. Everybody in the business who knew my father always had nothing but the nicest things to say about him. He didn’t drink, smoke, or play cards like they did to pass the time in the locker room. They respected that. Plus, Dad’s a big antagonist. He could always stir up trouble…in good fun, of course.”

Like the time in Watertown, N.Y., while wrestling for Roger Moore’s Universal Wrestling Promotion. After a card, the boys went to a restaurant. The babyfaces and heels sat separately. One wrestler, Gene Moore, was trying to make points with a young lady. He kept shooting Lester the “O.K.” sign from across the room. Les promptly caught the attention of his waitress. He points over to Gene, who is still giving Les the “O.K.” sign. The boys all leave. Gene follows a moment later. As he’s leaving, the police arrive. They try to arrest Gene for leaving without paying the cheque.

Another instance, the boys got done working a show in Point Pleasant, N.J. They continuously drove around one of New Jersey’s infamous traffic circles. All the while, Gene is mooning everyone out the side window. A cop pulls up behind them. Les opens the door and shoves Gene out onto the road, pants around his ankles.

It’s because of that respect for Lester, that they respected Heidi Lee, and looked after her on the road.

Even though both are retired from the ring, wrestling is still in their blood. The ring in the shop is still in use. George is now working on his craft. While he plans on becoming an N.J. State Trooper, the idea of wrestling has been in his mind almost all of his young life. After all, he’s been taking bumps in the ring since age four. And now, brother Robbie, seven, is also taking bumps, and is George’s valet, the youngest valet in the business.

The ring also acts as a training ground for many local police and troopers, as well as local independent wrestlers, who come in to fine tune their skills. And, because of the training and background of Les, Heidi Lee, and Artie Palmer, calls constantly come in from people all over the country, wanting the Morgans to train them to be wrestlers. As a result, they’ve opened Ringmasters Wrestling School. Lester believes that, if you’re going to train to wrestle, you’d better train right. “Listen, a lot of the boys, while they’re professionals, and I mean the top stars, do not know how to work. Everything is a dangerous, high-flying maneuver, and nobody sells anymore.”

Is it safe to say Lester isn’t happy with today’s product? “I’m not happy at all. They’re making money, I will say that for them.”

And Vince McMahon? “He’s a businessman first. A human being second. I have tremendous respect for him. He’s been there for my family, and he’s been super to Monsoon’s widow, Maureen. Anybody who says anything different, I just turn away. I know the the real Vince McMahon.”

Eventually, with the success of Ringmasters Wrestling School, a promotion may pop up in the near future. Would the Morgans find themselves in the position of the McMahons? “Heidi could manage. But I’m 58 years old. I’m a grandfather. My spine is fused together. It’s always been a young man’s sport. Let the younger guys have their day.”

Perhaps someday one of those young superstars will be “Trooper” George Mottola.