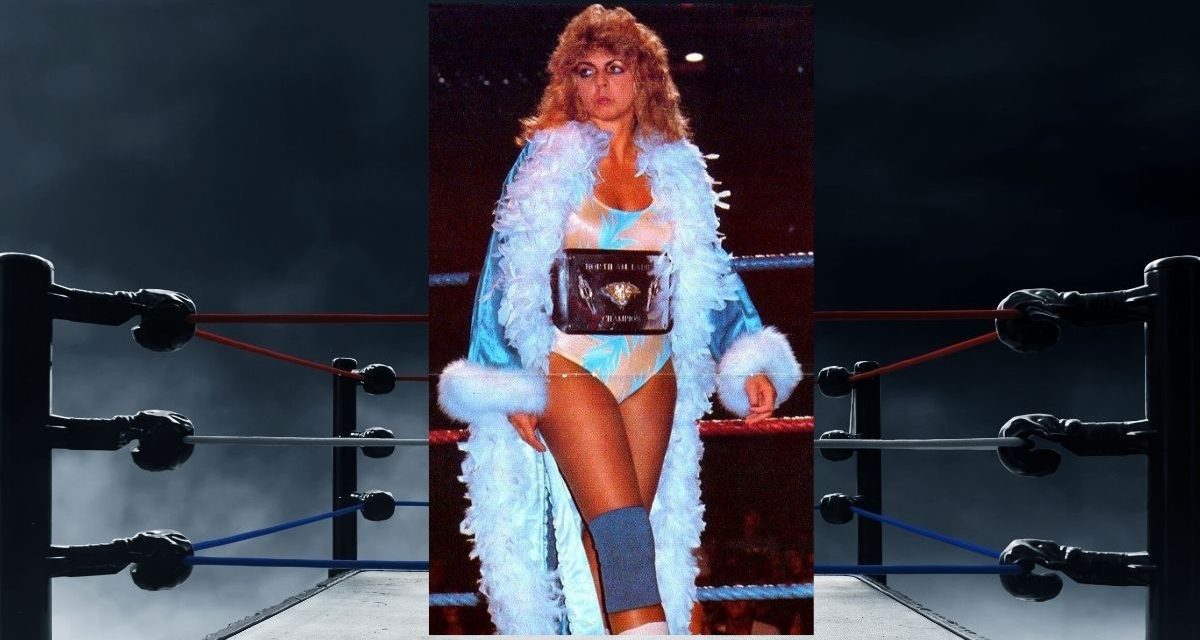 In April 2021, she had a seizure and her lung collapsed, but she recovered. Then months later, she fell and fractured her back and was hospitalized again. In November, she collapsed in a store and was hospitalized again. News broke in early February 2022, that she was back in hospital, with liver damage and some brain damage from seizures. She passed away on the morning of February 9, 2022, according to another woman wrestler, Bonnie Marie, on Facebook:

It is with great sadness Candi Divine passed away this morning. We’ve lost a great friend and Heaven gained a beautiful Angel. —

How much of a fan? She created a fan club for Lanny Poffo, and published a newsletter called The Leap.

In a Wrestling Then & Now newsletter, a writer A. Nonymous (Dale Pierce), wrote about a young Rummell, in a piece titled “THE ICW – The Early 1980s”:

Candace Rummel: The skinny, rabbit-like ring girl for the Poffo group, who was nicknamed Fang Face because of her prominent buck teeth. A Grey Line tour employee, she developed a crush on Lanny Poffo and in true groupie fashion, did everything she could to worm her way into the group and was aptly used for whatever menial task fit. When she decided she would learn to wrestle, the ICW group decided enough was enough and she was sent packing. Back in Tennessee, she started for an independent group for around $20 a night, working with likewise exiled Donna Day and was abhorrible. She even messed up a lockup and fell backwards in true klutz form, yet she always managed to be in the right place at the right time and was heavily pushed by awestruck photographers Joe Kennedy and the late Gene Gordon. Rummel, who had been taken advantage of constantly in the ICW days, learned to manipulate people herself and for a short time, made waves in the profession, becoming Candi Devine! It must have been poetic justice for her to outshine many ICW people who fell by the wayside as she climbed up.

Rummel’s main training came with Dale Mann in Georgetown, Kentucky, where one of the other trainees was Diane Von Hoffman (Phyllis Burch).

In 1980, Rummell debuted, facing Ann Jeanette in Murfreesboro, Tennessee. “I’ve been going to the matches for a long time and a lot of people know me. Most of them didn’t know that I’m a wrestler. They were surprised but their reactions have been very positive,” she told The Wrestling News.

She later changed to the Candi Divine persona — also spelled Candi Devine. In the Ladies Professional Wrestling Association, she was known as The Goddess. 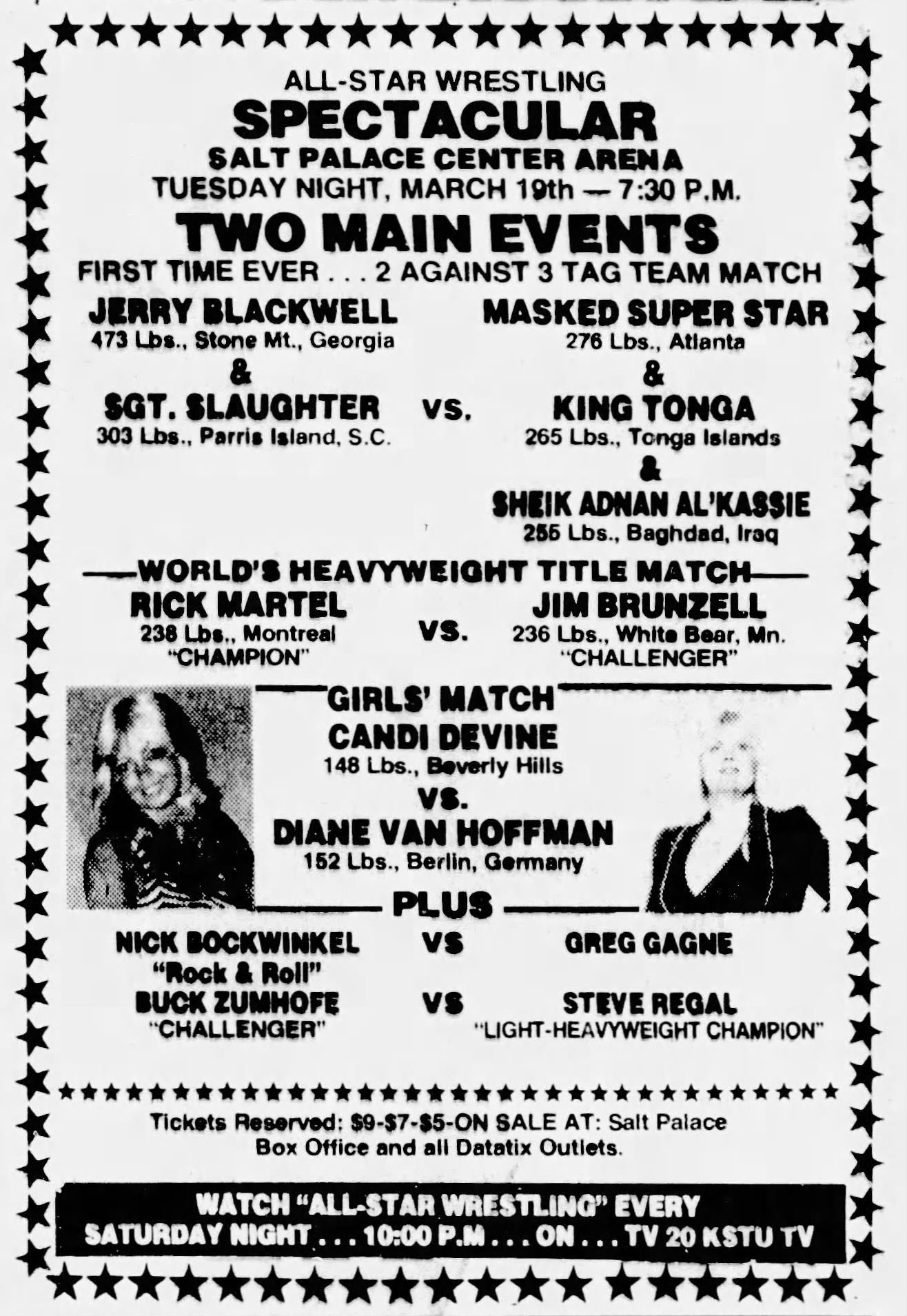 From there, the travel was constant, though she was not a regular as a part of the Fabulous Moolah’s stable of women wrestlers. She wrestled as late as 2005.

In a feature in The Wrestling News, her workout routine was noted:

Staying in shape is no joke for a professional wrestler. Working out is a part of Candi Divine’s strenuous wrestling career. To maintain her strength, endurance, and heart-stopping 36-23-38 figure. Candi likes to work out at a health spa at least three times a week. A typical training session will include calisthenics, weight lifting, and sauna. Many of Candi’s other interests aid her in keeping in shape. She enjoys spinning her wheels at the roller rink. An evening of dancing is another favorite pastime.

Candi Divine was a four-time AWA Women’s World champion (1984, 1986, 1989), and held titles in Chicago for Windy City, in Puerto Rico, and various other locales through the years. 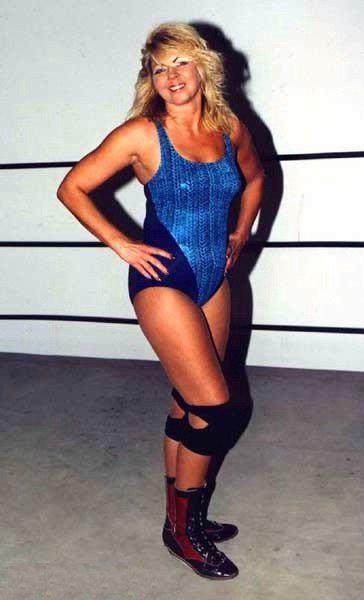 In 1986, Rummel graduated from the American Institute of Modeling in Nashville.

Besides wrestling and modeling, Rummel worked at a gym in Nashville.

She had a long-time relationship with wrestler Tom Burton, who died in 2010. They actually appeared on Divorce Court together in March 2009, as she accused him of running over her cat with his car. 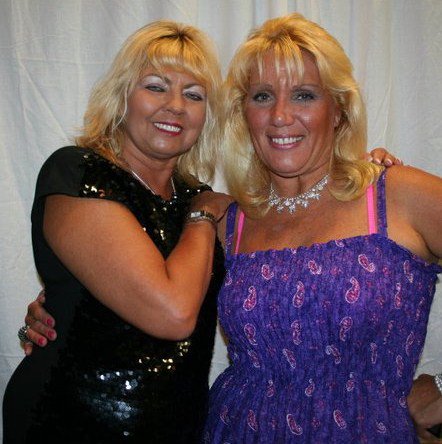 In 1992, the Ladies International Wrestling Association saluted Rummel with an award, in 1994 Rummel was honored by the Cauliflower Alley Club with a women’s wrestling award, and in 2008, the PGWA promotion presented her with the Penny Banner Spirit of Excellence Award.

EDITOR’S NOTE: After publication, the name of the writer from Wrestling Then & Now was determined to be the late Dale Pierce.