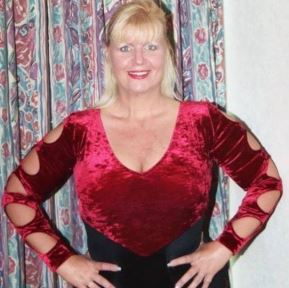 Diane Von Hoffman, one of the last graduates of the Fabulous Moolah’s training school, has died. She was 55 years old.

The news was unexpected. She had been in and out of hospital for months, including knee surgery, but she had been contacting friends only a couple of days ago. Apparently surgery this morning, July 6, did not go well, and her daughter, Marla Mayorga, posted news of her passing to Facebook.

Phyllis Burch was born April 13, 1962, in Kentucky, and grew up in a family that loved pro wrestling, particularly her father, who died when she was nine years old, and her two brothers, who both wrestled amateur and had dreams of turning pro.

While attending Fern Creek High School in Louisville, Burch actually began training with Dale Mann in nearby Georgetown, Kentucky. Realizing that she needed more schooling, Burch, who was in beauty school at the time, wrote to Lillian Ellison, a.k.a. The Fabulous Moolah, and was accepted into her care. Burch headed to Moolah’s training facility in Columbia, South Carolina, in April 1981, just before her 18th birthday.

Before she left home, however, she was given a message: “My mother told me if you are going to wrestle you need to change your name and leave the state. She never thought I would end up touring so many countries.”

In an interview with James Melby in LadySports magazine, Burch recalled the lessons: “The training was very hard. We worked out three times a day and then I worked at IHOP as a waitress on third shift to make enough money to live.”

It wasn’t long until she was on the road, debuting as Moolah’s partner, taking on Carol Smith and Jill Fontaine in a tour of the Northeast, hitting major venues like Madison Square Garden and Boston Garden right off the bat.

From there, like most of Moolah’s charges, the 5-foot-7, 165-pound Diane Von Hoffman traveled the world—Japan for a couple of months to polish her skills with Lelani Kai, Philippines, El Salvador, Ontario for Bearman Dave McKigney. 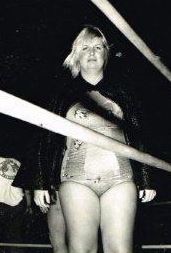 She returned to Japan in 1984, and many years later, recounted her experiences in the Land of the Rising Sun online: “I remember the matches with Yokata Rema. She was a great champion, and I know I could have beat her, but I was the American there, if you know what I mean On another occasion, I had just beat one of their girls in a singles match in Sapporo. As I walked out of the ring a man smacked me. You know me, I just smacked him back. Come to find out he was the involved in the Japanese Mafia. He and 2 other girls chased me. I got onto the bus, and then got out last to get a shower. They chased me again, and one of the guys pulled my hair from the back. Heck the girls were pulling my hair so hard, I didn’t budge, I looked back and he had a chair. Now this is a shoot, I mean this is real, and tried to pull me down. The midget, Haiti Kid, was there and jumped on his back. I got away, and they had to take us away quickly on the bus, boy was that memorable… ”

Her gimmick was The Teutonic Terror, a villainous German heel, relentless in her attacks, using submission finishers and a splash from the corner. Outside the ring, Von Hoffman was a sweetheart, and the outpouring of grief from her many, many friends in the business is a testament to that.

The other gimmick that she was known for was Moondog Fifi, a wild, unpredictable second to the Moondogs in the Memphis territory. It was there, in 1992, that she was USWA Ladies champ, beating Miss Texas – later Jackie in the WWE, and where Jeff Jarrett and Jerry Lawler cut her hair in the ring:

In a similar role, she was Lady Beast in Continental.

A bad car wreck in 1994 ended her full-time career. “It took everything I had, but with my hard work, strength from my family, I was able to get back up on my feet and be the best I can be,” she told Melby in 2000. Injuries during her wrestling days including a hurt knee and a torn ACL in her knee. In 1999, she was hurt in a fork truck accident at Toyota in Georgetown, Kentucky. 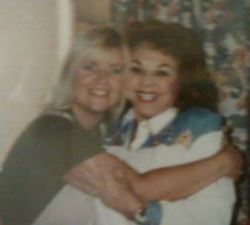 Von Hoffman and her trainer, the Fabulous Moolah, in 1999.

Like many, wrestling stayed in her blood, however, and she fought her way back to occasional in-ring action, beginning in June 1999 at the LIWA convention in Las Vegas., overcoming two knee surgeries and major back surgery.

Over the last number of years, she was a frequent attendee at wrestling reunions, like the private Gulf Coast Wrestlers Reunion in Mobile, Alabama, the Cauliflower Alley Club reunion in Las Vegas, or the Professional Wrestling Hall of Fame inductions in Amsterdam, NY, and more recently, in Wichita Falls, Texas.

Away from the ring, Burch had two children from her first marriage, to wrestler Ringo Mercanerio, daughters Melissa and Marla. Her second marriage was to Russell Kavanaugh, making her Phyllis Burch Kavanaugh.