One week after Canada celebrated its 150th anniversary, B.C.-based promotion All Star Wrestling will put on a show celebrating its 10th birthday.

Besides the All Star Wrestling “all-stars,” former WWE superstars Tommy Dreamer and Gangrel will also be in attendance, as well as Short Sleeve Sampson and UFC star Tom Lawlor to add some serious heat to the possibly the biggest show in the promotion’s existence. 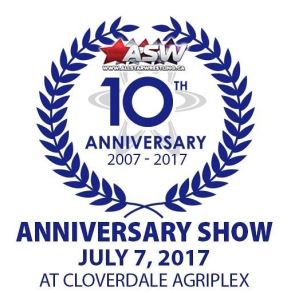 It all takes place on Friday, July 7th at the Cloverdale Fairgrounds at the Agriplex in Vancouver, B.C. Doors open at 6:45 p.m. and the show starts at 7:30 p.m.

Promoter Mark Vellios, the retired wrestler Michelle Starr, kickstarted the promotion in 2007 with the hopes of resurrecting the All Star Wrestling (ASW) brand. The original ASW, which started in the 1960s, ceased operations in the late ’80s. Vellios and his partner “Disco Fury” Nathan Burke made it their mission to bring back ASW.

“This is major milestone for this company,” Vellios told SLAM! Wrestling. “I had a dream that with the help of my partner Nathan Burke that we would bring back All Star Wrestling from the dead. We have succeeded and are growing bigger every year.”

Just like any other organization starting from scratch, ASW began very slow, organizing shows just once a month. Ten years later, the company has become a factory to create local talent, and is known to bring back some familiar faces every now and then from the big stages, including current WWE champion Jinder Mahal. Running shows monthly wasn’t enough for Vellios, so he chose to start doing them bi-weekly, but still thinks that there is demand for more.

“Right now we have stepped up our schedule to running two shows per month in our home venue. Ideally we would love to see a weekly show packing the Cloverdale Fairgrounds,” he said.

Over the last decade, both Burke and Vellios made great memories and produced many highlights. For Burke, his favourite memories of ASW happened both when he was in the ring, and as a promoter.

During his time as a wrestler, “Disco Fury” would go on to win one of his biggest championships. “One of the highlights of my whole wrestling career happened in Cloverdale. I was honoured and privileged to wear my friend Adam Firestorm’s title! I cried my eyes out with love and respect the night I won,” said Burke in an email. “It will forever go down as one of my top highlights in my life.”

As a promoter, however, Burke finds joy in the fact that he can allow his talent to learn from professionals. “From the likes of Tatanka, Chris Masters, Tommy Dreamer, Gangrel and The Honky Tonk Man,” Burke said, “the fans and our ASW wrestlers got to share the ring with some serious talent.”

Above all, doing this with the people he loves made the entire ten years worth it. “I got to do this with my family and my best friend and mentor Mark, a.k.a. Michelle Starr, and his beautiful family. That alone is a blessing!”

The “All-stars” are also very excited for the show on Friday, particularly one veteran by the name of Azeem the Dream. After being told time and time again that he wouldn’t make it as a professional wrestler, Azeem found a home in All Star Wrestling four years ago, and hasn’t looked back since.

“[The fans] should expect us to pull out all the stops for this one,” Azeem said, “Everyone’s been working hard, and doing their share promoting the show.”

Vellios believes that the marquee names, as well as ASW’s homegrown “All-stars” will make this show an exciting one for fans. In fact, ASW is planning on a night with close to 1,000 fans.

To put that into perspective, most ASW shows are only about five or six rows of floor seats, however the anniversary show will be in a bigger venue, filled with VIP seating, regular floor seating, and bleachers, as they believe the big show will attract a big audience.

“[Fans] can expect the biggest show in our history featuring our biggest draws of the last 10 years,” Vellios said, “We have something for everyone. Hardcore with Dreamer, and some attitude with Gangrel. We also have the biggest consistent draw in our history, Short Sleeve Sampson. Plus we got a ladies tag team match.”