The first women’s match Selina Majors ever saw was between Joyce Grable and Judy Martin. Shows at the time — in the ’70s — rarely featured female performers, making the bout stand out beyond all the others.

From that moment, Majors knew she was going to be in the ring performing, and Grable just happened to be the one who broke her into the business. Now 52, Majors is still living out that dream through Women of Wrestling (WOW), which debuts on AXS TV Friday night (8 p.m. CST), and Grable was there to witness it firsthand.

Grable’s significance did not hit Majors when she started training because “it was all so in the fast lane,” but time has allowed the Pro Wrestling Hall of Famer’s impact to sink in.

“It’s awesome that she was the first lady that I ever watched wrestle,” Majors said. “It was awesome that she trained me… and then for her to be front row at the WOW event and to be there and be part of WOW, it’s full circle.” 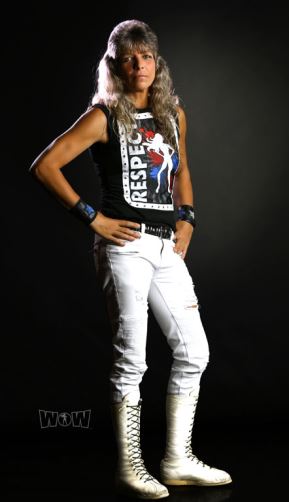 BREAKING INTO THE BUSINESS

Majors has been in the professional wrestling industry for more than 30 years. She broke into the business in 1986, but attended shows with her father in the ’70s.

Majors and her father talked to the man tearing down the ring to get advice on how she could get her start in the squared circle. He referred Majors to Lillian Ellison, a.k.a. The Fabulous Moolah, who ran her school out of Columbia, S.C.

“At that time, I wasn’t quite old enough,” Majors said. “I had to wait till after I was 18 and graduated from high school. That’s when I met Joyce Grable.” Grable, who lived in Georgia, took Majors in. “I trained while I was doing it. I went to her backyard, and I got in the ring with one of the men wrestlers,” Majors recalled. “She said, ‘Show me what you know.’ I didn’t know anything other than just watching on television, [and my first] match was on Friday night … I had to learn on the road.”

FROM WRESTLER TO TRAINER

Majors, who also wrestled as Bambi, has traveled through the United States, working for companies such as David McLane’s Powerful Women of Wrestling, the American Wrestling Association, Ladies of Professional Wrestling and World Championship Wrestling. In recent years, she has laced up the boots less, opting to focus on the behind-the-scenes of the business. 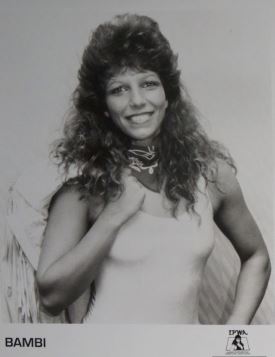 When she was known as Bambi.

However, she said her transition from wrestler to trainer didn’t “happen overnight.” She acted as a trainer when McLane started another all-female company, WOW, in 2000. Jeanie Buss, co-owner of the NBA’s Los Angeles Lakers, owns WOW, and McLane serves as its CEO.

“I had a great wrestling career,” Majors said. “I had a great journey in it, and now I’m ready to step aside in that particular category and live vicariously through the girls I’m teaching.”

Majors said she feels “blessed” to have lived the life she has and still be involved in wrestling. In her youth, she said, she had anorexia and “suffered from depression” during high school.

“If it wasn’t for the love and the passion I have for wrestling, I probably wouldn’t be talking to you right now,” Majors said Thursday, as she made the media rounds to promote WOW’s AXS debut. “So you can tell it is the love of my life.”

And the platform women have today, she said, is something she has waited “a long time” to see.

Though times have changed, and people are “ready” for female athletes to be showcased, she said McLane has “always” provided the platform for them to showcase their talent — from the creation of GLOW (Gorgeous Ladies of Wrestling) to WOW.

“We never stopped. We were the turtle that just kept on going in the race,” Majors said. “We just kept going with the same formula and the same pace and the same speed until finally all the stars lined up and all the right people saw the vision. We believe in something — we believe in a dream that was thought up over 30 years ago. It’s going to explode, and we’re here to see it and to celebrate it.”

And with the debut on AXS TV, Majors said the television time is a platform that WOW itself “needed for so long.”

FROM ‘GIRLS’ TO GLOW TO AXS

Majors said she has seen the women’s wrestling scene come “full circle,” including the terminology.

“In the ’70s when I was a kid, they had a girls match or midgets match,” Majors said. “That would be the feature. We were like an oddity. We didn’t get treated the same.”

From there, she saw McLane run with the idea of GLOW in the ’80s and experienced being on other all-women’s shows in the ’90s with various companies. She never gave up hope.

“[AXS] believed in us enough to give us that time slot,” Majors said of WOW’s television debut. “That’s a great time slot on Friday nights after New Japan Wrestling.” 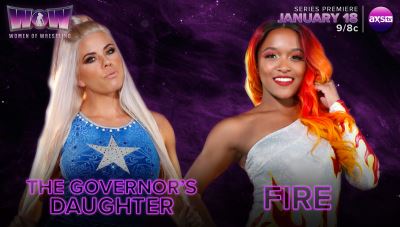 WOW features not only women from the company’s training school, but others who were “handpicked” from the independents, such as Kiera Hogan (who will wrestle as Fire on WOW), Tessa Blanchard and Santana Garrett.

“They work hard, not just for themselves but for the whole WOW team,” Majors said. “I’m so proud of them.”

WOW, according to Majors, is a product everyone — wrestling fan or not — will enjoy.

“The wrestling has evolved,” Majors said. “I’ve seen it go from the wrestling in the ’70s to now, 2019. That’s a long transition when matches are different, the athletes are better — everything — and right now, I think the wrestling world and the world is ready to see an all-women’s’ wrestling show.”

Majors said she hopes to see WOW grow into a “household name” and become the “biggest women’s platform” for wrestling — with dreams of seeing action figures or T-shirts at local department stores.

“I hope that we get the same opportunity that the men have had, and the sky is the limit,” Majors said.