Gargano-Theory end EVOLVE 120 on a happy note for fans

QUEENS, NY – I saw my first EVOLVE show in person in August 2016. It was an eye-opening experience and it continues to be a fun experience to see in person. Back then EVOLVE presented a great show with Drew McIntyre, EC3, TJP, Drew Gulak, Aleister Black, Matt Riddle, Kassius Ono, Cedric Alexander and Tony Nese. The independent scene sure has changed in the past two years and a half. The rise of Ring of Honor and the upcoming launch of All Elite Wrestling has kind of left EVOLVE an undeserved shadow, despite continuing its beneficial relationship with the WWE and NXT. As the previous list of names demonstrates, when attending EVOLVE you are more than likely seeing the next crop of stars not only for the NXT brand but for Raw and Smackdown as well. 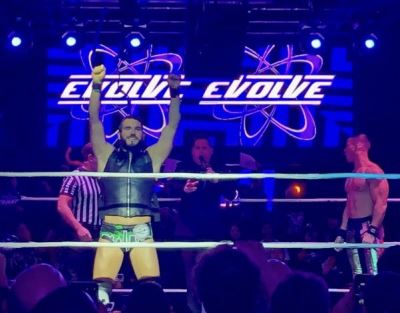 The show started with an in-ring interview by the Street Profits requesting they start the show with their match.

Josh Briggs came back right after to claim a win against Ford’s partner Angelo Dawkins.

JD Drake beat Joe Gacy with a moonsault to keep his WNN championship.

Curt Stallion beat Orange Cassidy and Leon Ruff in a three-way freestyle. Stallion accepted a deal to join the promotion after the match.

AR Fox lost to Anthony Henry who became the number one contender. 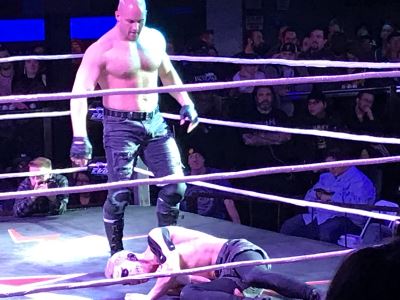 Darby Allin beat NXT’s Fabien Aichner with a roll-up in what might have been the match of the night if not for the main event. Allin was the crowd favorite and the match really captures the crowd who completely suspended their disbelief.

In the non-title main event, Johnny Gargano against EVOLVE champion Austin Theory, a ref bump made it seem like Gargano was going to be cheated out of a sure win, but an intervention by Priscilla Kelly, Darby Allin, and Josh Briggs brought the match back to a standstill. Finally, Gargano defeated Theory by submission. The crowd was there to see that match, as Gargano pre-NXT reputation was made with EVOLVE. The crowd exploded with chants of “Welcome home!” but went silent and listened when Gargano took the microphone:

“I will never forget walking through that curtain again. You sure know how to make a kid feel special.”

Gargano proceeded to put his stamp of approval on Allin and told him to do like he does and focus on winning championships since Gargano will challenge Ricochet next week on the next NXT Takeover show in Phoenix. Gargano concluded that part of this speech by telling Allin: “Do me a favor and go win that EVOLVE championship.”

Then Gargano requested that the dressing room come out and told the crowd they were the future and that La Boom and EVOLVE was their house now and he gave the crowd a clear message: “I want you to come back whether I am here or not. Pro wrestling is fun. I love you and I love EVOLVE. Thank you for letting me be in your house.”

EVOLVE will return to Queens, New York with another doubleheader with Shine this time at Melrose on March 16.