Gene Kiniski had a long association with amateur wrestling dating back to his teenage years in Edmonton. But while a young Kiniski captured amateur provincial and state heavyweight championships in Alberta and in Arizona and, a generation later, took things a step further by fathering a national champion amateur wrestler, it is entirely possible that Kiniski’s greatest contribution to amateur wrestling was in helping multi-time Canadian amateur champion and Olympic hopeful Bob Molle bounce back from a serious back injury and surgery after barely two weeks — just in time to compete as a freestyle wrestling super heavyweight and to win a silver medal at the 1984 Los Angeles Olympics. 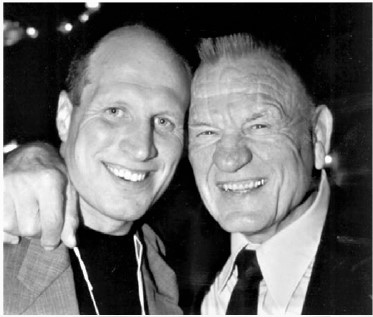 Molle, who later played for the CFL Winnipeg Blue Bombers, recalls, three decades after his silver-medal effort at the Olympics. “About three weeks before the Olympics I found out I [needed] a back operation. … I had what was called a sequestered disk. … A piece of the disk had broken away, and so they had no choice but to operate because it was protruding in my nerve and was just going to get eventually worse.”

Molle says, “It was just starting to embed in my nerve, and I was losing function in my left leg.” At that point, thoughts of participating in the 1984 Olympics were fast slipping away from Molle.

Mike Jones, Molle’s coach at Simon Fraser University and at the Olympics, concurs.

“I had no thought that he would even be able to come close to being able to wrestle,” Jones says.

Molle had met Gene’s son Nick Kiniski four years earlier, in 1980, when “Nick beat me at the Canadian national wrestling tournament in my hometown of Saskatoon, Saskatchewan. He beat me in the finals, so he was a bit of a — excuse my expression — a prick at the time because he beat me in the final in front of my parents and all the family and everybody. … [But] weird enough, at the end of the tournament, when we were sitting around the locker room later on, he came up to me and we started chatting. … I’d never met the guy before and, personally, hated him because, to tell the truth, I lost to him. And he recruited me to Simon Fraser.”

At the time, says Molle, “I didn’t even know who Gene Kiniski was.”

Molle first met Kiniski after arriving on the West Coast in mid-1981 to take up his place at Simon Fraser University. A primary training partner of Nick’s and, like Nick, both a football and wrestling star at SFU, Molle quickly became “part of the family” — alternating between time on the SFU campus with roommate Nick and long spells at the Kiniski residence. “We’d spend our off-season with Gene in Blaine,” says Molle, referring to the small town just across the border in Washington State, where the Kiniski home was located. “I think we had four or five summers there with him” — typically, training in the morning, attending SFU wrestling practice in the evening, and working nights at a bar.

Gene played an active role in Nick’s and Molle’s training in Blaine, says Molle. “Gene would beat the shit out of us, like, you know, ‘Wake up! How many eggs do you want? Do you want 8 … 10 … 12?’ He was always trying to get you bigger and stronger. Everything was old school — you know, more is better. He was like an egg and steak guy, meat and potatoes kind of guy, and just wanted [us] to get bigger and stronger.”

Training with Gene Kiniski was intense, says Molle. He recalls, “Gene was crazy about neck exercises. First thing in the morning … we had to do neck exercises because he didn’t want [us to get] hurt in football or wrestling and be paraplegic. It was like a morning ritual. You had to lay down … where the pool table was, and you’d have to do neck exercises every morning. And he’d stand there and he’d put his big mitts across your face, and then you’d have to go all different ways. … You had four sets of reps, and he stood there every morning, and you know what he used to do? Measure your neck. … He was all prevention — that you’d never get your neck damaged because you’d have a good support system.”

After his back injury shortly before the 1984 Olympics saw him hospitalized in New Westminster, BC, Molle says, “I wake up the next day after surgery and I’m all whacked out on drugs and everything else, and guess who’s there at the bedside? Gene.”

Molle recalls Kiniski greeting him: “Bob, how you doing? We’ve got to get training.”

“So I take my first step, and I don’t have enough balance [and] fall flat on my face. I didn’t even get my hands up in front of my face. I hit the cement, and my nose popped. … The nurse [heard and] comes running. ‘What’s going on? What’s going on?’

“‘You just got out of back surgery. What are you walking for?'”

Molle continues, “And Gene kind of looks at me. He goes, ‘I guess we’ll try that again tomorrow.'”

The next day, Molle recalls, “He held on to me. We got to the bathroom.” During his weeklong stay in the hospital, Molle says, “Every morning [Kiniski] would drive up from Blaine” to help him to the bathroom and lead him in walking, stretching, and doing whatever exercise his mentor thought Molle could handle. “He pushed the boundaries … to see how fast I could recover. [He said] ‘Bob, we’re not average people. We’re going to recover.'”

Molle says Kiniski wouldn’t be deterred from taking the lead at the hospital. He recalls Kiniski offering instructions — “Nurse, we’re going to do this and that” — to those entrusted with Molle’s care.

Molle recalls getting in a week of “training” under Kiniski while in hospital, followed by a week of training at SFU and some final training in Los Angeles before the freestyle wrestling competition got underway at the Olympics — boycotted in 1984 by the Soviet Union and 17 other countries. Fortunately, Molle says, his event was scheduled near the end of the Games, giving him time to get in just enough training. To emphasize how close he came to missing out on his dream, Molle says he watched the opening ceremony of the 1984 Los Angeles Olympics from his hospital bed in British Columbia.

It wasn’t until two or three days before he had to compete that Molle arrived in Los Angeles with his fingers crossed. According to Jones, Canadian team physician Bob McCormack had already declared, “Over my dead body will that guy wrestle in the Olympic Games.”

But Jones reports Dr. McCormack changed his tune when he examined Molle after the latter arrived in Los Angeles. The doctor’s diagnosis, according to Jones, indicated, “He’s not going to do any more structural damage. There’s absolutely no way the soft tissue’s healed, but I can sew that back up. If he’s your best bet, put him in.”

Jones continues, “So I put him in. But I never would have thought in my wildest dreams that he was going to be ready to do that.”

Molle performed well in his warmups and early matches before losing a decision to American Bruce Baumgartner and walking away with the silver medal — a result that no one with the possible exception of Gene Kiniski would have predicted two weeks earlier.

Molle recalls how he and Nick, while enrolled at SFU — a small college that did not meet NCAA standards — were sometimes regarded as “David taking on Goliath” when they participated in major wrestling competitions in the United States. Referring to a tournament in which both he and Nick were scheduled to face former NCAA champions in the semifinals, Molle recalls Gene Kiniski asking, “How can they call themselves champions if they haven’t wrestled you guys yet?”

Molle says, “That was Gene … the way he taught us.”

As it turned out, both Molle and Nick won their semifinals. Then, in the tournament final, Molle came from behind to beat Nick.

After earning his Olympic medal and graduating from SFU, Molle fulfilled a second dream by playing seven seasons of professional football as an offensive lineman and, eventually, team captain for the Winnipeg Blue Bombers. He was on two Grey Cup-winning squads and remains the only person to have won a Grey Cup and an Olympic medal. In 2016 — long after being inducted to the British Columbia and Saskatchewan Sports Halls of Fame — Molle was named to the Blue Bombers Hall of Fame.

Yet, over three decades after earning his Olympic medal, Molle, now a motivational speaker himself, is quick to credit Gene Kiniski with helping pave his way to his success at the Olympics and beyond. “The biggest thing he changed for me,” says Molle, “was the fear of failure. … When you came out and talked to him, you felt you could take on the world.”