Gail Kim making an ‘Impact’ behind the scenes

A legend in her own right, this IMPACT Wrestling Hall of Famer has travelled the world and goes down as having one of the greatest in-ring careers. Now retired, Gail Kim has taken on a new role in IMPACT, one that allows her to help young women find their way in the squared circle.

“Becoming a producer was a natural progression for me,” said Kim on this week’s IMPACT Wrestling Press Pass Podcast. She did have her fears, however, when she decided it was time to leave her active career.

“I was always concerned about how I was going to feel after I retired. Whether I was going to be depressed, was I going to miss it,” she admitted. The seven-time Knockouts champion added that being on the creative end did keep her involved in wrestling, which put her at ease.

Kim said she now aims to work with the Knockouts division and take them to the next level. She believes that there is something special about these women that separates them from others in the business. “I feel like the Knockouts have always been consistent since the day that the division was created by having a variety of girls and characters and they’ve never strayed from that.” Kim said that IMPACT has always made wrestling the priority and kept the characters true to who they are. 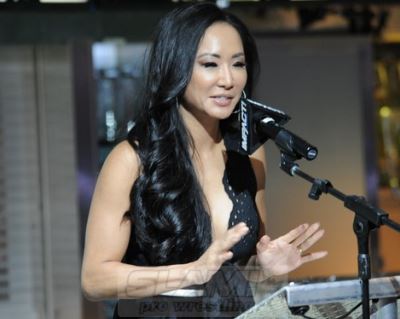 Gail Kim at an Impact Wrestling press conference in Toronto in June 2018. Photo by Mike Mastrandrea

This still remains the same today. She gave one of the current Knockouts, Rosemary, as an example of this.

“This was the first time I have ever experienced a female with a dark character, and at first I wasn’t sure how people were going to react to that,” said Kim. Fans, however, enjoy the diversity as well. “I have to tell you, the kids love it especially and I love that we’re doing something that hasn’t been done before.”

Kim said that wrestling gives them the opportunity to take risks and putting themselves out there. One of the chances they must take in this division is striking a balance between sexiness and in-ring ability. “I think there’s definitely room for [sexiness], I know a lot of people may not think that I would think so, but there’s room for just about everything,” she said. In response Scarlett Bordeaux’s lap dance segment with Scott Steiner that was seen over a million times on YouTube, Kim understands that it’s a product the audience wants to see. “I would like to see more of these types of things, but obviously [combined with] wrestling, of course.”

When it comes to mixed division matches, however, Kim thinks that it may not be the best for the Knockouts division. “I am one to want the best for the girls and I want them to have the best matches,” she continued, “those types of bouts need wrestlers with a lot of upper body strength and I’m not sure how many girls can execute it to that degree … To me, it’s always about being the best and I wouldn’t want to disappoint anyone or be less than.”

Iron matches may be a good alternative for the women. “As long as the girls feel comfortable and feel that they can exceed everyone’s expectations, I don’t see them turning down any type of match or challenge,” said Kim with a laugh. She recounted a few times in her own career where she fought in cage matches, street fights and no disqualifications, which have been around for years.

Kim revealed that there is an event coming up that embodies a more aggressive-style. “We just finished our taping in Mexico City and there is going to be a street fight that we will see from the Knockouts so people should definitely tune in!,” she said.

Although she is one of the only females in the production meetings, Kim said IMPACT is creating great shows, which makes it an enjoyable experience. “It has definitely been a challenge to fight for the women in this male dominated business but it has gotten a lot better over the years.”

If anything demonstrates Kim’s personality, it’s that she wants to fight to be the best. “It’s a challenge within ourselves [to be the best] not necessarily within the company. IMPACT has always make us an important part of the company,” she said. Kim said she is excited for what this new year will bring for not only the Knockouts, but for the company as a whole.