Triple H keeps an eye on All Elite Wrestling

The recent news of All Elite Wrestling running at the MGM Grand Garden Arena in Las Vegas has made Triple H pay attention to the newly-formed promotion.

“It’s clearly something that we will keep an eye on, and I’ll do what’s right for us, our fanbase. We’ll continue to monitor everything. When you’re a content provider, we compete against everything including sleep, the internet, and everything else. Everybody has 1,000 pulls on their time on a daily basis. We’ll continue to do what’s best for business for WWE,” said Paul “Triple H” Levesque, on Wednesday during a media conference call. 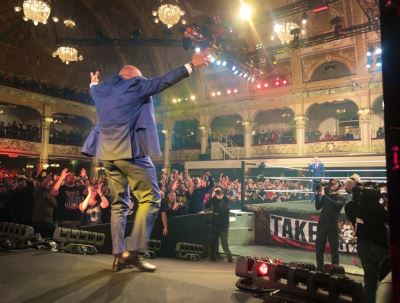 Triple H at the end of NXT UK TakeOver: Blackpool earlier this month. As he wrote on his Twitter account (@TripleH), “I had to come out and personally say thank you. Thank you to those in attendance @WGEmpress… Everyone who watched LIVE on the @WWENetwork… …and to everyone who believed in @NXTUK. This is YOUR Empire…#WeAreNXTUK!”

Developing young talent may put WWE ahead of the competition. WWE recently signed Matt Riddle and the War Raiders (Hanson and Rowe) who have prominent roles at NXT TakeOver: Phoenix on Saturday. “When you talk about the War Raiders coming off of an impressive showing at WarGames, coming off all of the success they’ve had, and stepping into the ring for the NXT tag team championships, to me that is a statement of how well they have done since they have come in. Matt Riddle has an innate charisma that you can’t take your eyes off of him. I think he’ll just continue to grow and move forward,” said Triple H.

Riddle and the War Raiders have had long and successful independent wrestling careers. However, others such as Bianca Blair didn’t have professional wrestling training prior to starting with NXT. “Bianca Blair all of a sudden came into her own. We did the first Mae Young Classic and there was conversation going into that about whether she can even do a match. That’s a dramatic change to where she is now. Shayna Baszler who was super green and had a little bit of experience but was super green walking in the door is now, to me, one of the steadies of the division.”

NXT wrestlers have developed into better performers. However, they may all progress much more in the future. “Where everyone goes and transitions, NXT, UK, main roster, Raw, Smackdown, I think they are all grooved in the right way to have success that they need to have. They have the tools and are positioned to do amazing things in the future and hopefully all of them will,” said Triple H.

The NXT talent will utilize those tools at NXT TakeOver: Phoenix at the Talking Stick Resort Arena Saturday night. “Once again, a very exciting card. You can look at it from top to bottom and there is not a whole lot on it that couldn’t steal the show,” said Levesque.