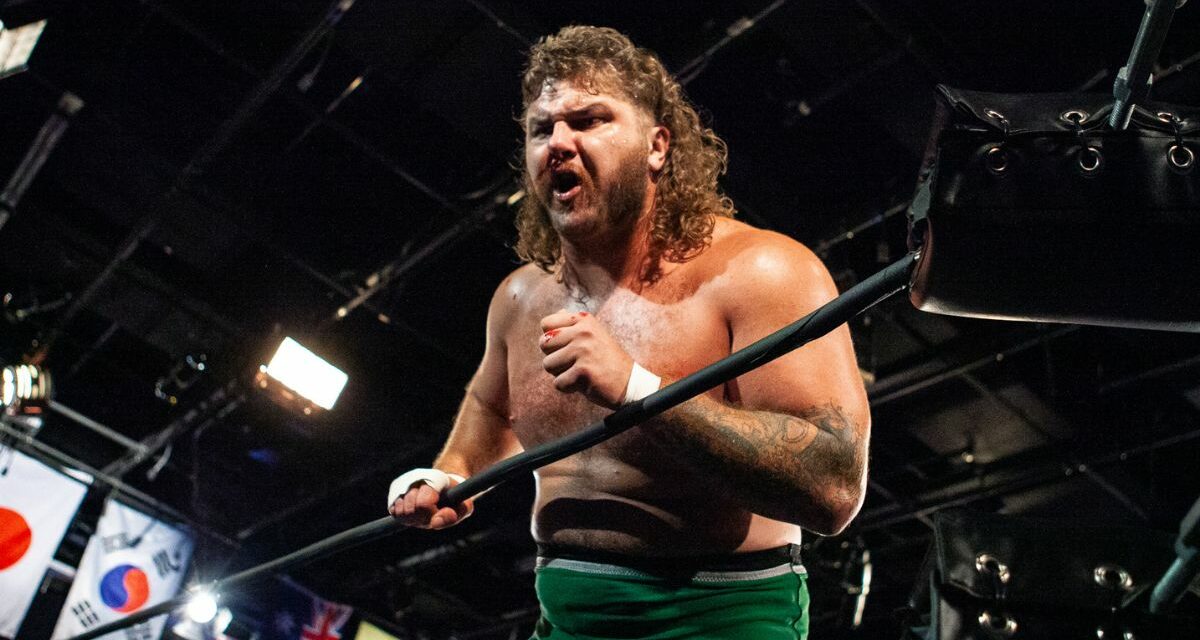 There are men and there are wrestlers, and then there is the “Thrillbilly” Silas.

“That’s ‘Thrillbilly’ Silas Mason,’” he corrected. “Get it right, baby!”

Not only does Mason have a way with words, but in the short time he has spent in the National Wrestling Alliance, he has been making a name for himself in the ring and has been guided by his “main squeeze” Pollo Del Mar.

The East Tennessee product was more than happy to share what revs up a “Thrillbilly” to think about professional wrestling.

“I always tell people I won state for no reason because I thought you had to be a great amateur wrestler to become a pro wrestler,” Mason said. Mason went to William Blount High School, in Maryville, Tennessee, and he dropped a little history on the namesake of the school. “He was the first ever governor of Tennessee, and the first man in the United States to be accused of treason,” he pointed out, all true, and Blount was impeached and expelled from Congress for plotting to sell land to the British in 1797.

From there, Mason went to college at the University of Tennessee, and that’s when his true calling came. “Well, I originally trained with Chase Owens up in Elizabethton [Tennessee]. I literally just saw an ad on Facebook for it,” he recalled. “I didn’t have a computer until I went to college. I didn’t even have Facebook until I went to college about 2010, and so I saw the ad and I wasn’t doing too much of the studying or anything like that, and following just wasn’t really my thing. So, I just dropped out, and decided to become a professional wrestler.”

“I moved to Portland, Oregon, and I trained with Derek Drexl and Doctor Cleaver for DOA Professional Wrestling,” Mason said. What does “DOA” stand for? “They don’t tell you,” he chuckled. “I don’t know. I guess it’s above my pay grade.”

But he’s also cut his teeth for the last seven and a half years in the indies like West Coast Wrestling Connection in Oregon and Future Stars of Wrestling in Las Vegas. “I wrestled Chris Bey before he was ‘Chris Bey,’” Mason said.

As for the “Thrillbilly” moniker, how did that come about?

“I was just driving down the road trying to think of, like, cool wrestling names, ’cause everyone’s like, ‘How did you come up with Silas Mason?’ Well, I didn’t. It’s just a name that I had forever,” he said as a matter of fact. “I never thought it was that cool of a wrestling name. I was originally just going to be ‘The Thrillbilly.’ Like, no actual name.”

From there, the name took hold. “Apparently there’s a song by Billy Ray Cyrus called ‘Thrillbilly,’ so I didn’t even know that at the time.’

Mason returned to Tennessee and wrestled locally for Southern Underground Pro, and then Southern Honor Wrestling in Georgia. But this is where the fortunes of the Thrillbilly changed. “A year to the day I wrestled Davey Richards in St. Louis [at NWA 74], I had snapped my leg in half (my femur) doing a moonsault,” he recalled. “I didn’t wrestle or anything for eight [or] nine months, and AJ Cazana and Dr. Tom [Prichard] told me the NWA was coming to town in June. So, I was like, ‘Well s***!’” Mason said. “I got in shape and between AJ and Joe Cazana talking about me and then Dr. Tom introduced me to Mr. [Billy] Corgan, and then he was like, ‘You’re really big, so we’ll put you in this spot to wrestle Luke Hawx,’ and it just kind of happened.”

Mason was introduced to the wrestling world as part of the NWA’s PowerrrTrip tapings. “It was my third match back from breaking my leg.”

It was also where fans met the love of his life, Pollo Del Mar. 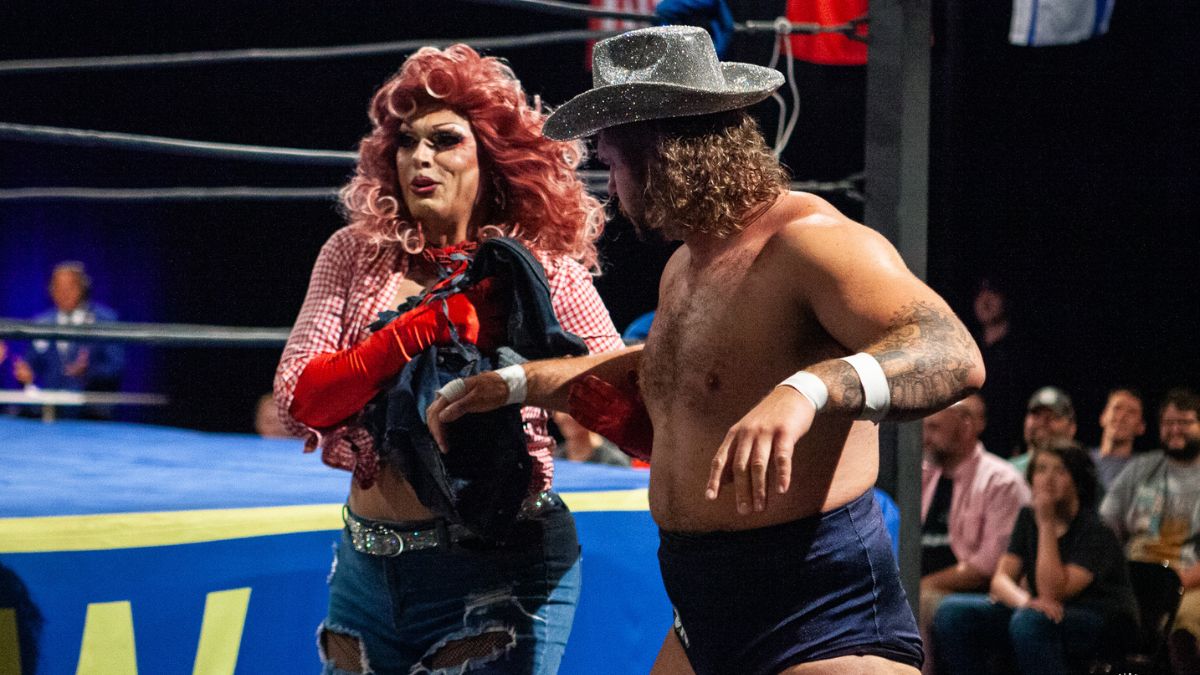 SlamWrestling.net first spoke with Pollo Del Mar about her being paired with ‘The Thrillbilly’ during PowerrrTrip, and we asked Mason how that came to be from his unique perspective.

“I was down there on the corner of Cherry and Magnolia and just down my luck, staring down the bottom of the barrel, waving that checkered flag on the road to hell,” he recalled. “Until I saw my Saving Grace; the most beautiful woman I’ve ever seen in my life. You know The Thrillbilly; when he sees something, daddy, he goes and gets it. So, I took her out to the Church’s Chicken, the finest restaurant on MLK down there and the rest as they say is history. Behind every great man is a woman cooking his beans and, daddy, Del Mar cooks the best beans, this side of the Mississippi!”

As for the real reason, “I was talking to Pollo and Miss Madusa,” Mason said, “and she’s sitting there and she’s like, ‘We’re gonna put you with Pollo.’”

Del Mar had been doing things for the NWA behind the scenes but nothing yet in front of the camera, but when Madusa pitched the idea, Mason added another spin. “I was thinking about it for a second, and then I said, ‘Well, how about ’cause I’m kind of a big dumb redneck, what if I think they’re a real woman?’ Madusa’s eyes just lit up, and she was like, ‘Oh my God.’”

This plays just as well with the fans, as Mason put it. “Everybody’s sitting there hollering, ‘That’s a man!’ and [I’m going], ‘You wouldn’t even know what a woman looks like!’ They’re wrestling fans. Buncha nerds and virgins.”

It’s a different dynamic, but Mason and Del Mar made it work. Mason attempted to explain. “I’m always one of those people that I think pissing people off and getting the actual real reaction from somebody; like so many people try to sanitize everything. That’s not where we’re going over the top with it,” he said, “but it just ’cause some people want to see NWA ol’ school kind of rassling, and that’s basically what I do. And then with Pollo, it does show that other side of the coin.”

Even social media had a lot to say. “You look at any YouTube comments section or Facebook comments section; like people got pissed off about it at first,” Mason said.  “They’re like, ‘Oh, I can’t.’, ‘What is this on my screen?’, and s*** like that. I’m glad they’re mad about it. Let’s talk and keep pushing that envelope.”

Even with a handful of matches under his belt, it was when he got to wrestle Major League Wrestling’s Openweight Champion, Davey Richards, on night two of NWA 74 that he was wrestling one of the biggest matches to date.

“I had no idea until like, literally, they announced it,” Mason recalled, “and they just said, ‘Hey, go out there and have a damn good match!’”

Mason shared his mindset going into the match. “I’ve wrestled a lot of name guys, but not on such a grand stage, ’cause The Chase hotel is the fanciest place I’ve ever stayed at in my life. So, you have that opulent ballroom, and you got all these lights. My name’s on the big screen, two of them, and it’s like, ‘S***!’ and it hits you in that moment.” 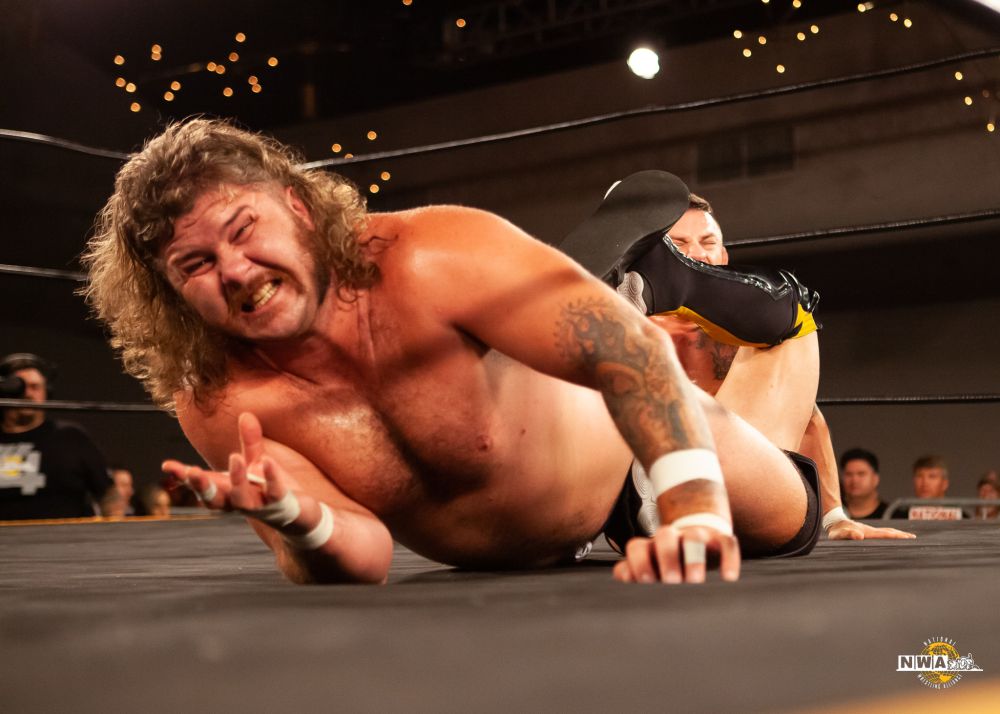 He and Richards put on a fantastic match that meshed well with their various styles of wrestling, and many noticed, especially in the back.  “I haven’t heard a single bad thing from other people about it,” said Mason. “Everybody has told me that it was a really good match and they said between that and Kamille [it] was their favorite match of the night, too. And if you’re right up there with the World Women’s Champion, you’re in pretty good company when they’re talking about match of the night.”

Even Corgan took notice as well. “He said, ‘You went in there with a guy who was a representative of another company,’” Mason recalled, “‘And I put you into that spot ’cause you represent why I want the NWA to be about old-school big guys, slapping some f***ing meat and letting people have it.’ So, he really enjoyed it. Well, that’s all I can say. If the boss likes it, you’re doing good.”

Mason has definitely upped his game since then, as he recently was featured in a three-way match for a spot to challenge Cyon for the NWA National championship. While he came up short, there’s no stopping this thrill ride, or as he put it, “God never made a more American man than ‘The Thrillbilly’ Silas Mason.”