Pollo Del Mar getting a ‘Thrill’ managing in the NWA 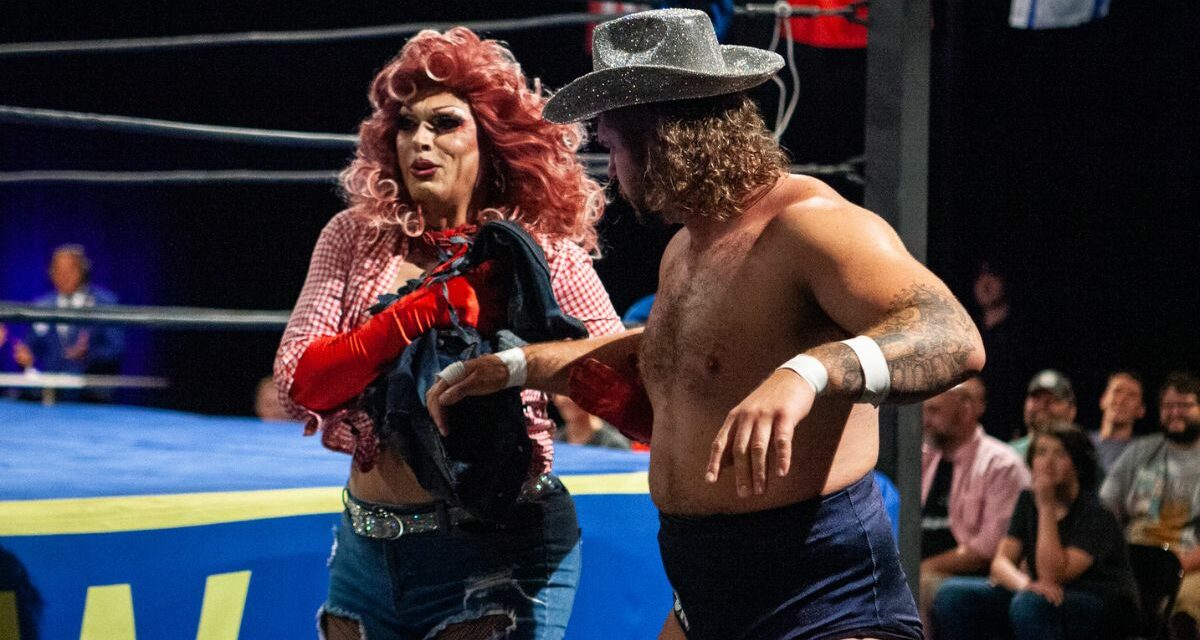 Managers in professional wrestling are larger than life, being the mouthpiece of their respective clients.  They can be brainy, wizardly, or dangerously ambitious in getting the wins and the titles for their wrestlers. One manager that has fans turning their heads literally and figuratively is Pollo Del Mar.

An American drag queen, Del Mar (real name Paul E. Pratt) is also a columnist and journalist, having written for publications such as the Huffington Post, interviewing a variety of celebrities under his real name and the “Del Mar” moniker, and has even contributed articles and been a columnist to Pro Wrestling Illustrated.  But it is “The Notorious P.D.M” who has recently been making waves managing “Thrillbilly” Silas Mason in the National Wrestling Alliance.

SlamWrestling.net had the chance to interview “The Manager of Champions” and inquire how Pratt would describe the persona of Pollo Del Mar.

“As [it] relates to the National Wrestling Alliance, the character there is very different than the ‘Manager of Champions’ character,” Pratt elaborated. “Because I have a partnership with the ‘Thrillbilly’ Silas Mason, and the character adapted for that relationship. So, in general, I think of the ‘Manager of Champions’ Pollo Del Mar, which is the role I play most prominently along the West Coast and in various independent promotions around the country, is a very archetypal, very standard pro wrestling manager.”

As for what’s being presented on NWA Powerrr and NWA USA shows, Pratt expanded further on the subject. “Who Pollo Del Mar is in the National Wrestling Alliance with Silas Mason, the ‘Thrillbilly’, is a kind of an evolution that has yet to be seen,” Pratt said. “Our relationship is still being defined; our role is still being defined, and I’m very excited to see where we go with it.”

“This is back in the Bill Apter/Stu Saks era of Pro Wrestling Illustrated, and its sister publication,” Pratt recalled. “I would submit regularly; like I would type up… this is so long ago… I would type up articles and put them in the mail. My mom would send them off. I was like maybe 13.”

It was when Pratt was 15 that he was writing professionally. “I was working for New York Times affiliate newspapers and various local publications as a paid professional journalist as a literal teenager. Unfortunately, that never came to fruition with Pro Wrestling Illustrated for many decades.”

“But the successful portion of my wrestling career/writing career came when I was with the Huffington Post,” Pratt said, “because I had been covering pop culture individuals — Lady Gaga, and interviewing Katy Perry, and people like that and, at some point, I just decided, ‘Why would I not begin to write about professional wrestling, which are also pop culture celebrities?’”

So how did Pollo Del Mar come into being in the sport of professional wrestling? “That’s a two-part question and it’s not as easy to answer as it seems,” Pratt started. “As an undergraduate in Cleveland, Ohio, I watched… of course, I naturally watch pro wrestling still… and there was a local public access television show called Masterz of Mayhem, and it was run by a local promoter named Psycho Mike, and during that show, there was a phone number, like, ‘Do you want to get involved?’ or something like that. I called that number and a few weeks later, Psycho Mike called me back, and here I am in my dorm room and he’s talking to me, and I told him I wanted to be a pro wrestling manager.”

While Pratt had managed wrestlers in a couple of matches in the local promotion, it just didn’t feel right. “I felt so uncomfortable and who I was, and very out of place environment.” He ended up going back and doing commentary for Masterz under his real name.

“I moved across the country a couple of years later, and so that laid dormant for a very long time, and in that time ‘Pollo Del Mar’ was born as a persona in the world of nightlife and performance and entertainment,” Pratt said. “So, when I circled back to pro wrestling… I would say that was maybe around 2017, that’s probably when she came across, and that’s after I had done all, I had great success in the world of drag as an entertainer, I had great successes as a journalist. I’d had a lot of a lot of success and ultimately, I’d become very comfortable in who I am and this new character.”

But it was an old wrestling connection that would bring Pollo Del Mar to wrestling audiences. “One of the local promoters who I had worked with to interview, of all people, Ryback, invited me to participate in one of his local events. And then that continued for about three years, and then it sort of really exploded.”

Del Mar is still new to fans of the NWA. “My first experience with the National Wrestling Alliance came August 28th of 2021, when I appeared at the end of NWA Empowerrr pay-per-view for Mickie James.”

In the past, pro wrestling has put male wrestlers in a situation where they are forced to wear women’s clothes and makeup to humiliate them or present them as being freakish. When asking how Del Mar gets reconciled in his mind, Pratt offered this thought-provoking answer: “I think there’s a huge distinction of what the past presentation of drag in the world of wrestling has been and what I do,” Pratt explained. “I think that a large part is because it has always been presented as, you know… it’s the old switcheroo; somebody, usually, who is not a member of the LGBTQ community presenting something as either being forced into emasculation through wearing women’s clothing or as a form of comedy type of situation.”

Del Mar speaks eloquently about the LGBTQ in pro wrestling in the 2022 documentary, Out in the Ring, as well.

“While comedy is a large part of what I do, it’s not done in any capacity to belittle myself. I play this character the same way that every other professional wrestler plays whatever character they have,” Pratt continued. “And when I say that I’m a first, I mean because of the fact that my character is presented in a way that is not demeaning or belittling to me as a person who’s presenting this because it’s a character of my choosing. It’s a character that I play with great, great effect in a higher level of presentation than what we’ve ever seen.”

“The way I reconcile what we have done in the past as an industry in professional wrestling and what I’m doing now,” Pratt concluded, “is that I am a groundbreaker. That’s how I view myself.  Like I’m breaking new ground and I’m re-establishing and reaffirming the way that the world of professional wrestling can see drag.”

Lately, Pollo Del Mar has been seen of late escorting her man, “Thrillbilly” Silas, to ringside. As for how Del Mar roped him into her charms, Pratt has a theory. “I think that if I had to speculate about it, I would say that the National Wrestling Alliance was looking for something that had never been done before,” he said. “We are the juxtaposition in of something that is very non-traditional, in many ways, in my character and something that is extremely traditional World of Wrestling in his character. And I think that it makes us more spectacular because of the unexpected presentation, I was very excited about it.”

As for fans’ responses to seeing both individuals coming to the squared circle, Pratt tells it best. “What quite unexpectedly happens, the ‘lightning in the bottle’ situation for us, in my opinion, is that Silas is so astounding in his own presentation, Silas is such a large person and personality in his own right that it almost overshadows what I’m doing,” Pratt said. “And I love that I’ve never ever been in a situation professionally where my personality is the smaller one. I’ve never been in most situations socially where my personality is not the largest in the room. For me, the pairing of something so unexpected as a ‘Thrillbilly’ and a ‘Glamazon’ is refreshingly different, and a standout. So, the audience response has been expectedly mixed because we walked out as the least expected, and yet somehow you cannot take your eyes off of this.”

All the more reason that Del Mar/Pratt is excited for NWA 74, August 27 and 28, in St. Louis. On Night 2 of the double pay-per-view, Silas will challenge MLW Openweight Champion Davey Richards. How did that come about? “Well, I’m an outstanding manager! I, of course, negotiated the best opportunities for us on the largest-scale event of the year for the National Wrestling Alliance. I was certainly angling for us to have title opportunities.”  (Then Pratt comes clean: “I found out about our match when it was leaked on the internet. I literally read about our match before I was told our match.”)

While Thrillbilly Silas has yet to garner a win in the NWA, Del Mar feels very confident in her man’s ability to pick up gold this weekend. “The reality of what Silas Mason presents with a genius like me at his side, if I can stop accidentally seducing him at the wrong moment,” said Del Mar. “This is 6’ 5” 275-pound unstoppable ‘Thrillbilly’, and if we can harness our passion that we have for each other at NWA 74 and direct it towards Davey Richards? We’re going to skin a wolf, and I’m going to leave with a new coat, and Silas is going to leave with the gold.”