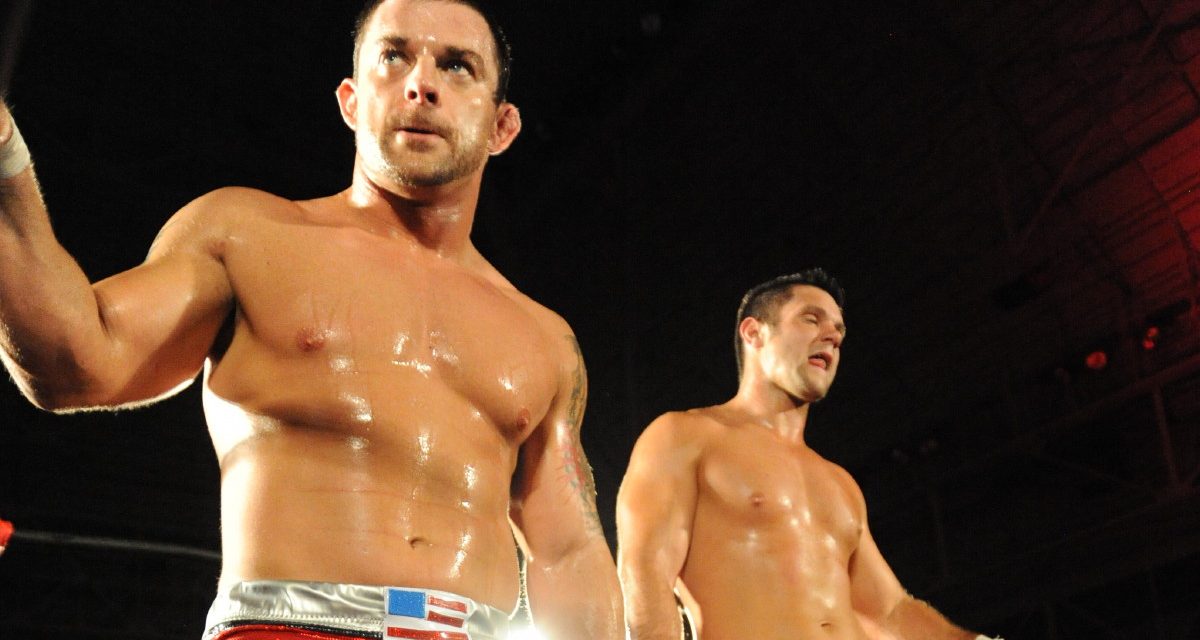 The year 2011 has been one of highs and lows for Ring of Honor World champion Davey Richards.

At the beginning of the year it seemed Richards was done with professional wrestling, having announced his retirement. However, by the end of January it was clear that Richards had a change of heart and turned his back on the those plans. Since performing that U-turn, Richards went onto capture the ROH World championship in a fiercely competitive affair against best friend and American Wolves tag team partner Eddie Edwards in June at ROH Best in the World. 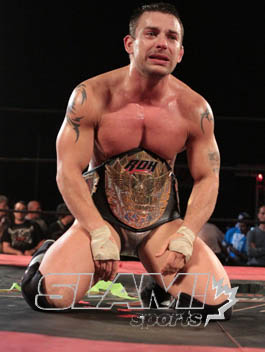 Davey Richards, in tears, after winning the Ring of Honor World title back in June. Photos by George Tahinos

Now with the hotly anticipated rematch between the two set for this Friday at Final Battle, which takes place in the Manhattan Centre, New York City, Richards talks to SLAM! Wrestling about his preparations and thoughts leading into the contest with Edwards.

“My thoughts are that this match between me and Edwards will be a war.

“It’s not going to be quick, it’s not going to be easy, or one-sided, it will be a war, plain and simple. I love wrestling in New York but my matches there have not been kind to me. I’ve gone into hospital more times than not, that’s why I accept that this match will be absolutely brutal.

“Two guys will walk into that ring and we’ll be lucky if two guys limp out. That’s how hard-hitting it will be. At the end of the day though, I will still be champion.”

In preparation for the contest and to learn from the previous encounter, Edwards has acquired the help of former UFC fighter and NWA World wrestling champion Dan “The Beast” Severn to hone his mixed-martial arts skills. When asked about his opponent gaining Severn’s help, Richards seemed unconcerned.

“I have a ton of respect for Severn and I think it’s wise on Eddie’s part. Anytime that you can go and learn a new skill is great, but what he has to understand is that what he is learning and what he is doing now I’ve been doing for the last two years.

“It’s great what Eddie is doing but he’s just playing catch-up. No one is knocking me off my perch — that is my ring.

“I took away a firm belief from our last match that it doesn’t matter how hard I train, how well I prepare myself physically and mentally, sometimes in life — especially in the fighting world — it can just come down to heart. Eddie is as tough as they come, but on that night I had the bigger heart.

“Eddie’s putting all his energy into learning these new techniques which is great but I was able to overcome him in our last match just like I will overcome him again on Friday. 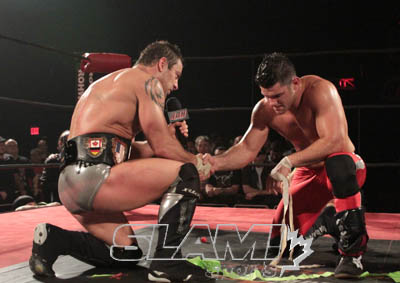 Davey Richards shakes Eddie Edwards’ hand after besting him for the ROH World title at Best in the World.

Back in June at Best in the World, it was evident for all to see just how much winning the ROH World championship meant to Richards. After more than 30 grueling minutes of intense action Richards broke down in the middle of the ring, while the New York crowd embraced him as their new champion. For Richards, winning the championship was an extremely emotional moment and one that he will never forget, during a time when he was battling personal troubles.

“I cried before I went out to do that match and I cried afterwards too. I’ve had a lot of discrepancy with wrestling, a love/hate relationship with it because it took me away from my grandparents dying and it had a major role in my marriage ending.

“I’ve been through a lot of trials and tribulations because of this business. I’ve missed out on a lot because of wrestling and I felt for a long time like a lot had been taken away from me with not a lot to show for it. Now I have won the World title for one of the biggest companies in the world I feel that now I do have something to show for it.

“Kyle O’Reilly put it right when he said to me after winning the title, that for that one night wrestling was 100% real and it was, absolutely real. That whole night for me was as real as it gets.”

It is Richards’ belief that winning the title has brought him closure and has made him happy within the wrestling business, something which he said he hadn’t felt for a long time.

“I no longer hold the bitterness I had for wrestling anymore, I have closure, I am able to accept. When I look back to all these great matches I had with KENTA, Austin Aries and Tyler Black (Seth Rollins in FCW) I was in absolute turmoil at that time, I hated wrestling. It was like I flicked a switch, went out there and did it.

“Now I can sit back, have great matches and really enjoy it. Now I am a better man, a better person, which makes me a better leader and more deserving champion.

“I’ve had title opportunities before but the time wasn’t right and I wasn’t prepared to be a champion but now I am. I didn’t have the confidence of a champion, I always knew I could outwork anyone but my head wasn’t in the right place.

“Back then I never really thought of myself as a champion whereas now I know I am the champion for a reason. I am the best in Ring of Honor, I know that may sound arrogant but to be a champion of any sport you have to believe that you are the best and have the skill and confidence to back it up.”

Proud of being the ROH World champion, Richards believes that one of the aspects he brings to the title is passion. Passion for being the best in the world, passion for leading by example and he enjoys being a leader to the young up and coming ROH talents.

“I don’t look at that title and think it’s nice to have a shiny belt around my waist or look at it as a way of collecting the biggest paycheck from the company; no, my passion is leading the company and giving the fans their money’s worth.

“I love it when fans tell me that my story to getting the title has inspired them, that’s what being a champion is all about, inspiring others to get what they want in life. I feel comfortable leading ROH, because it’s my time to do that, I get it now, I know what I need to do.

“I was one of the last guys alongside people like Roderick Strong who was in this company at the time when we could learn from guys like Samoa Joe, Bryan Danielson (Daniel Bryan) and Nigel McGuinness when they were back in their prime and I really put myself through the ringer to get where I am today. I went to Japan to better my skills; I’ve travelled almost non-stop all over this world trying to increase my knowledge and to perfect this craft.

“I can use all that I’ve learnt to now teach these up and comers like O’Reilly, like Adam Cole and like Michael Elgin, who I have no doubts will become a future ROH World champion.

“Teaching these guys is what I really like most about being World champion.”