During the last week before Christmas, going to the Walmart is like being in WCW’s World War III multi-ring battle royal — over-crowded, violent, and ultimately not worth the time spent. Fortunately, the book section of the store is generally empty of the hordes of shoppers gone wild, and a place where one can find quiet refuge. And some last-minute stocking stuffers for the young wrestling fans in your family. 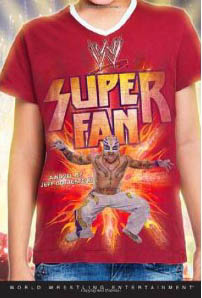 Super Fan is an official WWE novel aimed at teens and older pre-teens. In this story, WWE holds a contest to crown a “Super Fan” which gives a young member of the WWE Universe a scholarship and a guest manager role at WrestleMania. Though Shawn Reynolds isn’t a fan, he enters the contest to surprise his father, a huge WWE fan who is called to serve his country in Afghanistan.Shawn is assigned Rey Mysterio as a mentor to teach him the ropes, so to speak, in a series of academic and physical challenges — picture a season of NXT, but unlike that show, fans in the book actually care about the competition. Standing in Shawn’s way is fellow contestant Spike Murcer, mentored by the villainous CM Punk, who uses every dirty trick in the book to foil Shawn’s quest.

In addition to celebrating WWE fandom, the book also pays respectful tribute to the troops, holding true to the company’s real-life patriotism and to the company’s charitable works. Author Jeff Gottesfeld does a good job in taking familiar characters and staying quite faithful to their real-life personae, even if some of the dialogue may be a bit cheesy. Still, at the end of the day, the story is compelling enough that younger readers will enjoy it, whether they are WWE fans or not. 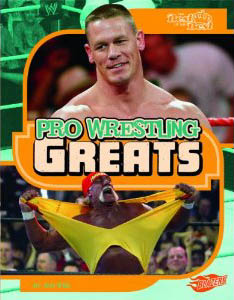 Pro Wrestling Greats, on the other hand, is a new reader aimed at younger kids and is definitely geared towards wrestling fans. It’s a mini-book that spotlights a dozen of wrestling’s biggest names from the modern era. Stars such as Hulk Hogan, The Undertaker, “Stone Cold” Steve Austin and Edge are each given a two-page colour photo spread, with a very limited profile (approximately 20 words per entry) about the star. Some pages also include the definitions of wrestling terms such as “gimmick” and “signature move.”

The photos are quite good, but the narrative on each wrestler could have benefited from a little more research — or at least an editor familiar with the subject matter. For example, the piece on says that he earned the title of Grand Slam Champion by holding four championships all at the same time. The Undertaker’s profile notes that he has never lost his “Wrestlemania Championship” which seems to be introducing a new title of some kind. And the picture on Triple H’s page looks suspiciously like Chris Jericho.

That being said, the book is clearly intended to be an educational tool, and from that standpoint, it could inspire young wrestling fans to improve their reading skills. For older fans, though, or for anyone looking for a wrestling book with any insight, getting this book for Christmas would be the literary equivalent of a lump of coal.