Umanosuke Ueda, who worked in North American as Professor Ito and Mr. Ito, has died at the age of 71.

Ueda was a feared villain in the Japanese rings and one of the top tier of stars before a car accident in 1996 that resulted in a broken neck and left him in a wheelchair for the rest of his life. 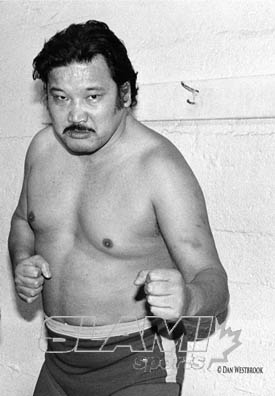 Born Yuji Ueda on June 20, 1940 in Aichi, Japan, he broke into pro wrestling with the JWA in 1960, and debuted in April 1961. With his bleached blond hair, Ueda stood out from the typical Japanese wrestler.

When the JWA promotion closed its doors, Ueda worked for All-Japan, and then headed to North America.

As a single, he was NWA World Junior Heavyweight Champion for a week, beating and losing to Danny Hodge.

Typical of the time, the Japanese workers were given little chance to show that they spoke English. “Professor Ito can make himself understood in a limited fashion,” reads a Joplin (Mo.) Globe story from March 1970.

“Two Japanese destroyers Chanti Yokouchi and Mr. Ito will test their Oriental styles against the full steam ahead battleship tactics of The Infernos in next week’s International City Wrestling card,” hypes an El Paso, Texas story from November 1968.

Back in Japan in 1976, he worked for the IWE promotion and then New Japan, where he teamed with Tiger Jeet Singh for a championship tag team reign.

The duo made headlines when they both switched allegiances to All-Japan, a part of a massive inter-promotional war.

For the last years of his career, which ended abruptly with the car accident, he worked for the IWA.

Away from the ring, he was a regular on the Japanese game show Takeshi’s Castle and was in the movie Burst City.