Tiger Jeet Singh’s tag team partnership and friendship with Umanosuke Ueda, who died Wednesday at age 71, is deep and rich, and full of stories of loyalty and political intrigue, that spanned over three major Japanese federations.

“He was with me like a glue,” Singh told SLAM! Wrestling, recalling their near 35-year friendship.

As a team, Singh and Ueda were headliners for New Japan Pro Wrestling from 1977 to 1983. Their wild, brawling style and frequent use of everything from chairs to swords to those hidden foreign objects, captivated the audiences. Booking-wise, they were always kept strong, battling top names such as Antonio Inoki and Seiji Sakaguchi.

Singh said that he knew a little of Ueda when he was in the IWE, but it was in New Japan that they bonded.

“When he was with me, he had to be a bad guy!” laughed Singh. Ueda, with his bleached-blond hair, siding with a hated villain, became a prototype of sorts for a rebellious Japanese heel, competing against the respected, established stars. 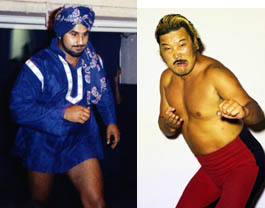 “He was one of a kind. He was my manager. He was my right-hand man. He was my protector. He taught me all the customs of Japan. Believe you me, that was the key to my success,” Singh said. “Can you believe it? For 30 years, we never had an argument; never, never. If we were eating some place, he would pick up the bill automatically. I don’t have to ask him, he’d just go pay the bill.”

As one of the biggest stars in Japan in his era, Singh’s bills were paid by the company and he was treated in high-class fashion.

“He had a heart of gold. Believe me, I met a lot of Japanese people, this man was different, you know. His word was gold. Honesty is the best policy — he had that. He won’t cheat me for a dollar,” said Singh, who would regularly receive gifts from fans and sponsors, everything from diamond cufflinks to envelopes of cash. Singh said that Ueda-san would often be given the gifts and not only never took anything for himself, but refused when Singh offered to share.

Singh had no problem agreeing that their partnership meant greater fame for Ueda.

“Who was Ueda before? Nobody,” he said, adding that it went both ways. “We went all over. I only could go travel in that country with the sponsors. I caught all of the big sponsors because of Ueda-san, because he spoke the language.”

In the ring, they reveled in the mayhem and shared the joy. Singh told of a photo of Ueda kissing a belt Tiger had won. “That picture was so natural. He was so excited. He didn’t have to kiss my belt — kiss your own belt! He was so excited. See, he knew he was playing a role to promote me. This was his job.”

And he earned Singh’s loyalty.

“He was always watching my back. If something was going funny, he was there to fight,” said Singh. “We went to a place and started drinking. All of a sudden, something went wrong and a fight broke out there. We had a show the next day in Hokkaido. Everybody started fighting. We don’t know who the hell we’re hitting. After that, the police came and arrested us, and put us in jail. The company bailed us out; we had a show the next day. Then they wanted to fire Ueda.”

Seiji Sakaguchi, a power broker behind the scenes in New Japan, as well as a star in the ring, told Ueda, “You are Japanese. You know the rules,” and then fired him on the spot.

“I felt so bad. I said, ‘Why should he be fired? Everybody should be fired. It’s not his mistake, it’s everybody’s mistake,'” Singh recalled. To rectify things, Singh sought out the other wrestlers who were in the brawl to sign a petition to bring Ueda back, but he found reluctance, especially among the Americans.

Tiger Jeet, who was a main star, took the petition with the names that did sign to Sakaguchi. “I sat with him, I told him, I explained everything,” said Singh, adding, “‘If you fire him, you have to fire me too.'”

“They were all shaken up over why I’d take such a big stand,” he said.

New Japan brought Ueda back. “This is how close we were. I put my neck out for Ueda-san, and Ueda-san put his neck out for me.”

JUMP TO ALL JAPAN

Singh shared the background on his — and Ueda’s — jump to the All Japan promotion.

He didn’t have a contract with New Japan. “My word was gold that I would never ask for any more money, I don’t ask. I’m not a bad guy, I always feel I’m not a bad guy. You know how much I deserve. If you want to keep me, you pay me that,” he explained. “I stayed with them almost eight or 10 years during all that. I was the World champion so many times. A lot of people tell me, ‘Tiger, you should ask for more money.’ I said, ‘No, I’m very happy making what I’m making. I don’t want to ask anybody for any more money.'”

According to Singh, Inoki and Sakaguchi had been secretly recruiting Abdullah the Butcher to jump from All Japan to New Japan. “They wanted to destroy [Shohei] Baba,” said Singh, adding that Inoki “wanted to be like a godfather, untouchable” and booked himself that way.

With the ink barely wet on Butcher’s contract to switch, Singh learned through his friend (and All Japan American talent booker) Terry Funk that he would team with Butcher against Inoki and a partner. The main problem was that no one had asked Singh, and he didn’t want to team with Butcher, whom he didn’t respect.

“I said, ‘Thank you very much. Screw yourself.’ I hung up the phone. That was it. Then the phone calls started coming.”

One representative from New Japan called him from Germany to try to smooth things out, and wanted to go see Singh in Toronto — but Singh didn’t want to see him. The rep went to the airport and started asking the South Asians working at the airport where to find him. “He didn’t know where my farm was. I was living in Dundas,” Singh said. The rep took a cab, and the cab driver called ahead to Singh, which allowed Singh to go rent a hotel room, and he told his family to tell the visitor he was out of the country.

Giant Baba got in touch, and Singh said yes.

Tiger was promoting shows in Trinidad, and four reps from All Japan, including Baba and his wife, were waiting for him at a Toronto airport hotel upon his return to Canada.

Baba proposed a five-year contract. “I told him I wanted double what I was charging Inoki. I told him on top, I wanted a $20,000 booking fee,” he said. The booking fee Singh could use to hire people to come on the tours with him, and he just had to tell the office how much he was going to pay that person.

“The first thing I did, I talked to Baba-san. I said, ‘Baba-san, I want to bring my friend, Mr. Ueda.’ Ueda had a lot of heat with everybody,” Singh chuckled. “He was a straight-shooter. He didn’t give a damn about nobody.”

Singh made his pitch, knowing that Mrs. Baba, especially, didn’t like Ueda. Baba said okay. “Sure enough, Baba understood, his wife understood. So I brought Ueda-san back as a partner again in the All Japan company. That meant that anywhere I went from there, he had a problem with Baba-san’s wife. So they were not really doing anything with him. Then after Baba-san died, I left that company. I didn’t like Baba-san’s wife either, because she was different, you know.”

The Singh-Ueda team worked on top of the All Japan cards against the likes of Giant Baba, Jumbo Tsuruta, Genichiro Tenryu and Terry and Dory Funk Jr.

After All Japan, Singh went to the IWA. “I negotiated a very good deal with them, and they paid me whatever I wanted because my name was strong. And I told them again, ‘I want Ueda-san there.’ So I brought Ueda-san there too. Anywhere I went, I had Ueda with me all over the place.”

Ueda’s career ended in March 1996, when he was a passenger in a car accident. He was paralyzed below the neck and in a wheelchair for the rest of his life.

Singh talked to his friend just one week before he died, and would talk to him on a regular basis and try to visit when he was in Japan. “Every time I saw him, I said, ‘When are you going to get up? I don’t want to see you in that wheelchair,'” said Singh.

Despite his circumstances, Singh said that Ueda was a positive person. “He would laugh with me every time.”

Their friendship lasted, concluded Singh. “He told me I’m the only wrestler calling him every week. Usually in good times, everybody’s your friend, everybody’s your cousin. But when the bad times come, and you disappear from the scene, people don’t even bother calling you. They don’t know who you are. But I never, ever left him alone.”

Greg Oliver is honoured that Tiger Jeet Singh chose to share his memories of Umanosuke Ueda with SLAM! Wrestling — before returning the calls of any of the Japanese media. Greg can be emailed at [email protected].