Friday’s Ring of Honor Final Battle event marks its tenth anniversary; having been the last ROH show of each year since the promotion’s inception in 2002. In that time, Final Battle has evolved into one of the biggest shows of the year, where feuds climax, new angles begin for the coming year, and titles have often changed hands.

Emanating from the Manhattan Center in New York City, the 2011 edition of Final Battle featured a main event of Davey Richards facing Eddie Edwards for the ROH World Championship, in the third and final rubber match in their incredible series of contests. 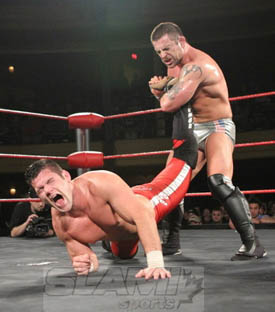 Davey Richards twists the ankle of Eddie Edwards in the main event of Ring of Honor Final Battle. Photo by George Tahinos

Great back story leading into this one, with Richards and Edwards supposed to be going to train with Dan Severn together. However, with Richards unable to attend, Edwards went alone thus perfecting Severn’s Dragon Sleeper move and in the process upsetting Richards that he went without him. Richards, having seen Edwards use this in contests leading up to their match, has become fearful of the move.

The pair started off by feeling each other out with submission attempts, but things soon descended into stiff strikes and big suplexes, which was expected in a match between the two. The match was fought at a very slow and methodical pace, which made it obvious these two were in it for the long haul.

Crowd just weren’t into this as much as the previous contest, which was a shame. In fact it has to be said since intermission, the crowd has been quiet and the event’s quality overall has really taken a downturn. Looks as though the No DQ match earlier wore them out; the slow pace in this encounter wasn’t helping at all either. Midway through, the crowd volume turned up when Roderick Strong interjected himself, leading to a brawl between Dan Severn, Team Richards and The House of Truth.

Once they all disappeared both Richards and Edwards were left alone, the former tag team partners went back to what they know best, submissions and strikes, with Edwards finally locking in the Dragon Sleeper, after many occasions of teasing it, but Davey escaped.

Kevin Kelly, Nigel McGuinness and Jim Cornette are in the ring to start the show, they note that this is the biggest crowd in ROH history, and the best preliminary iPPV buy-rate since the company started presenting them.

A real contrast of styles here in our opening contest which pits the highflying Perkins against the hugely powerful Elgin. Perkins perfectly executed a flip dive off the apron, but Elgin caught him, ran across the ringside area and rammed Perkins straight into the guard rail back first. Minutes later, Perkins flew from the top rope again only to be caught by Elgin in a vertical suplex position and then slammed down with huge impact.

Perkins tried gaining a series of offense but eventually he fell victim to a Buckle Bomb and Spiral Powerbomb as Elgin picked up another victory. A real solid opener which helped amp up the already hot NYC crowd.

A battle of The Embassy’s current Crown Jewel against the man that originally bore that very moniker. Rave frequently out-wrestled “The Dominant Male” with some good displays of intelligent grappling but Ciampa used his biggest strength: brutal striking to his advantage and took control. Rave, managed to score near falls after delivering both the Shining Wizard and the Rave Clash, which drew a huge chant for AJ Styles, weird to hear a chant for a TNA wrestler on an ROH event.

The numbers game which Rave himself enjoyed for many years, came back to haunt him as first, Nana was seemingly offering him his spot back in the Embassy, then R.D. Evans, Ernesto Osiris and Mia Yim all attempted to blindside Rave, but to no avail. The distractions were eventually too much however, as Ciampa was able to level Rave with Project Ciampa for the win.

Bennett entered the ring to a huge chorus of boos, the heat ROH fans have with him is incredible. He berated the NYC crowd which drew a massive negative reaction. They responded with a funny CM Punk chant aimed at the WWE Champion’s former girlfriend Maria, now obviously the partner of Bennett.

However, with the promise of championship gold hanging in the balance, that pair were unable to stay on the same page, attacking each other. All three men had stints of being in control of the match, however like most triple threat matches, this suffered from being disjointed and a little sloppy in places. Bennett hit a beautiful TKO on Generico which drew probably one of the first pops for him since joining ROH. Generico was the first man eliminated when Bennett caught him with a roll-up while he was distracted by Lethal. Mere seconds later, Bennett turned around and ate a Lethal Injection for a three count.

Lethal retains the title. Meaning that Bennett was unable to make good on his claim to win a championship before the end of 2011.

This one started with intense brawling from the opening bell. Steen brought most of the offense which included an awesome running cannonball attack whilst both men were on the apron, a powerbomb on the apron, a frog splash to the floor, and a huge powerbomb onto a suspended guard rail all in the first few minutes of the contest.

Corino, whose experience in hardcore matches cannot go without note, started to tell as he weathered the storm and fired back with a low blow and multiple weapon attacks. Corino followed this up as he delivered a monstrous superplex through a guard-rail suspended on four chairs, which looked absolutely incredible and must have hurt like hell! Steen, seconds later, was caught on the top rope with a kick from Corino, he then fell off the top rope and crashed through three chairs and a table which were positioned on the floor below.

Steen fought back and scored with a Package Piledriver through several chairs in the middle of the ring, which was an incredible sight. Steen covered Corino and even with a very slow count from Jacobs and Jim Cornette begging him not to count to three, Steen won the match and now has a spot in ROH. Great contest, which featured some really scary and crazy spots and an interesting chant of “Please don’t die” from the ROH faithful.

After the match Steen gave referee Jacobs a Package Piledriver and then attempted to do the same to Cornette, but El Generico hit the ring and interfered, brawling with his former nemesis. Steen was able to overwhelm Generico however, delivering a Package Piledriver through a table off the apron and leaving whilst laughing to himself, as medical personnel attended to all of his victims. Announcer Kevin Kelly lost his cool, calling Steen a son of a b***h, as intermission came calling.

Match #5: Tag Team Gauntlet Match for the Contenders Cup – The All-Night Express vs. The Bravados vs. Caprice Coleman & Cedric Alexander vs. Future Shock vs. The Young Bucks

The Bravados and Caprice Coleman & Cedric Alexander, who were making their Final Battle debut, started the match. Coleman was flying around the ring like a wild man. Kelly mentioned that ROH officials were not impressed with The Bravados win/loss record here in ROH and the fact that they were eliminated first by Coleman and Alexander didn’t do The Bravados any favors.

The Young Bucks entered the match and turned up the heat, continuing their ongoing rivalry, the Bucks and Future Shock battled intensely for several minutes. The Bucks especially looked impressive and their More Bang For Your Buck finishing move is more impressive every time I see it. They hit this, to eliminate Future Shock.

The All-Night Express were the final entrants, unfortunately Titus’ knee was just too injured to allow him to contribute, leaving King alone. The referee intervened when The Bucks gave him a standing figure four and 450 splash combo, referee stopped the match, giving The Young Bucks the victory and a tag title shot in 2012. Once Titus was injured, the pace slowed way down which seemed to bring the crowd’s mood down, also not sure the crowd (or anybody watching for that matter) was totally into the ref stoppage.

Kevin Kelly brought up the fact that there were rumors Strong’s opponent would be his announce partner Nigel McGuiness. He denied this. It seemed like no-one was going to answer Strong’s challenge, with Truth Martini getting close to a ten-count and therefore a default victory for his client, Strong. At nine however, the music of Chris Hero hit to a thunderous ovation. Hero ran through most of his signature offense, but his time away from ROH left him at a considerable disadvantage with Strong able to take advantage and get the win. Continuing with his methodical pace and focused game plan, Strong devastated Hero’s back to soften him up for his favourite holds, starting with a top rope backbreaker and continuing with a German suplex into the corner.

Hero was able to survive the Gibson Driver and came back to drop some bombs of his own in the form of two Rolling Elbows and a Cyclone Kill. Hero then managed to nail The Death Blow which looked to have ended the match, but Truth Martini prevented the three count, causing Hero to chase him around the ring.

This distraction allowed Strong to hit the Sick Kick and get the win, this seemed a little disappointing, with Hero having been a heel in ROH for so long it seemed to be hard for the crowd to get behind him.

Before the bell, Haas & Benjamin attacked The Briscoes, This pre-match beat down became quite awkward after a while, seeing as Haas & Benjamin have been portrayed as clean babyfaces. Seemed like ROH may have been trying to do a double switch of roles for both teams. It was either that or ROH was trying to portray that WGTT had enough of The Briscoes and wanted to beat them at their own game. Either way, the NYC fans profusely booed and jeered both Haas & Benjamin. This pre-match attack involved multiple chair attacks that left Jay bleeding and both Briscoes nearly unconscious.

Eventually the bell rang and thus started some hard-hitting brawling. Benjamin was taken to the back with injured ribs, but when the referee was knocked down, Benjamin returned and attacked the Briscoes with a 2×4 which drew a Hacksaw Jim Duggan chant from the NYC crowd. But just when all seemed lost, the Briscoes rallied from behind and hit the Doomsday Device out of nowhere and won the match and the titles. Strange contest, which should have been better given the participants. This lost the NYC crowd.

Post-match: Davey started a speech about how tough Eddie is but Kevin Steen mocked him and stated he will beat Davey for the title in 2012 and then hold the company hostage. Richards was being held back, this segment drew a strong response from the crowd, just a shame they were put to sleep by the main event.

Strange show, don’t recall an event tailing off quite so badly after intermission before.