When looking through the archives of World Wrestling Entertainment, it is without doubt that the year 1997 is one of the most important in its illustrious history.

During this period, WWE was a place where things were rapidly changing, the rise of “Stone Cold” Steve Austin, the situation with Shawn Michaels and Bret Hart which led up to Montreal and the ECW Invasion were just a few factors which all contributed to WWE finally moving in the right direction to once again overtake WCW in the Monday Night ratings war. 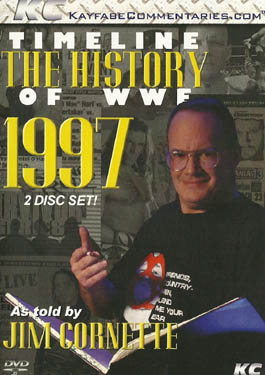 With previous titles in the timeline series, this format stays the same, that being a graphic screen which details a particular date and occurrence, then Sean Oliver of Kayfabe Commentaries and his guest talk through that specific subject. To lead us through the year is Cornette, who had massive dealings with WWE and WCW, and ran his own promotion, Smokey Mountain Wrestling, for a number of years and is probably one of the best people to lead us through such a transitional period in WWE’s history.

While talking about various subjects throughout the year, Cornette gives his skeptical take on the knee injury that Michaels suffered and the subsequent loss of his smile plus his opinion on the Montreal screwjob, believing the whole thing to be a complete mess. Cornette describes that he thought something screwy was going to happen for the finish, and the morning of the show he asked Vince McMahon if he had a finish set up. McMahon said he did, and Cornette said that was all he needed to know. When the bell rang, Cornette jumped up and was gone, claiming that he beat referee Earl Hebner out of the arena.

Cornette also is very critical of the Hitman for his part in this situation, believing that he was trying to force McMahon’s hand in the issue. He believes Hart took himself and his status as a Canadian hero way too seriously. Cornette said very candidly that he would have respected Hart much more if he’d had just told the truth on his feelings toward Michaels.

He also can’t believe that Hart actually called all the newspapers and said that he never actually lost the title, thus giving what Cornette believes to be great publicity for McMahon over the issue.

Another popular subject is Cornette’s favourite person in the whole wide world (see sarcasm) Vince Russo. Back in 1997, the year Russo came into power, Cornette didn’t have any serious heat with him. Russo’s rise to power came after a horrible Raw in which they played a house show from Germany on TV and did live play by play.

Cornette tells how McMahon was mad the next day because the show got a lousy rating and decided that they were going to go with Russo, because Russo had been saying that they needed to get more reality based. Cornette had been telling McMahon the same thing ever since he joined the WWF full time, but while Russo’s direction would be what would be famously known as “Crash TV” Cornette meant to just get away from silly gimmicks and cartoon characters and let them be the wrestlers they were.

While liking Russo at first and wanting to help him for the sake of the WWE, the relationship turned sour as Russo was not interested in listening. Cornette tells a story about Kane’s debut, He came up with Hell in Cell and the idea of Kane ripping the door of the cell. McMahon decided he wanted Kane vs. Undertaker for WrestleMania, which was five months away. Cornette lets us know that Russo wanted to have Kane chokeslam Undertaker through the announce table the next night. Cornette told Russo that it was too soon, but Russo’s answer was, “Well, we can do something else later.”

Cornette couldn’t believe what he was hearing and was eventually removed from creative toward the end of the year, which he was fine with, because he was sick to death of Russo by then. Cornette claims McMahon was taking two of Russo’s 100 idea and tweaking them so they’d work, but he was hearing the other 98 of them and wanting to kill Russo.

Obviously because this is Jim Cornette going through the year on this DVD, it will come as no surprise that this title is long, clocking in at 3 hours and 10 minutes, this isn’t a bad thing though, no it’s a good thing, meaning you get incredible value for your money.

In a really interesting and unique inclusion to the overall content on this title, Cornette actually brought his agent book with him detailing all the live events that happened at that time. There’s a record of where they were, how many people were there, and how much they drew. It’s such a useful detail and really puts into perspective how the WWE was doing at this time.

Overall it’s another thumbs up from Kayfabe Commentaries for this DVD, an incredibly detailed title which gives you a nice picture of what the WWE was going through at this time. Anything with Cornette on is going to be entertaining and full of useful information, and this is no different.