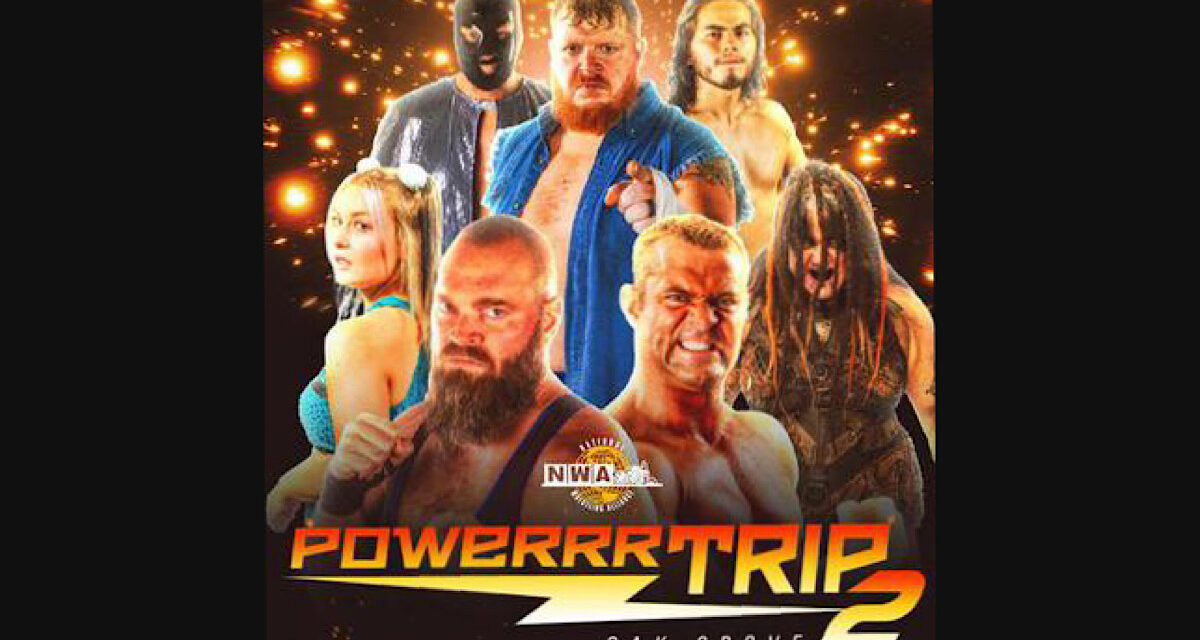 If nothing else, the National Wrestling Alliance is keen on spotlighting new superstars in the modern era, and this is no different as we go on a PowerrrTrip 2.  Not only are two new wrestlers making their debuts, but there is also some heavy-hitting action with Mike Knox and Trevor Murdoch, and…

No sooner did I start typing that paragraph, than the show begins with a cold open with Kyle Davis and Mike Knox in the squared circle.  Knox gets to brass tacks and says Harry Smith was going to be his opponent, but he’s not medically cleared.  But he is here, and he talked to “his boss” Matt Cardona for permission to fight and has a great idea for him and the fans, and the greatest idea is to face…Trevor Murdoch.  Knox calls him out, and Davis is exasperated, saying he’s not in the building, and we’ll have to see how the show shakes up in a bit.

I was expecting Murdoch versus Captain YUMA, but as in life, it is in professional wrestling; the card is subject to change.  So, let’s step Into the Fire and turn on the POWERRR.

Once again, we come to you from Valor Hall in Oak Grove, KY., in association with Tried N’ True Wrestling.  Joe Galli, Tim Storm, and Tyrus have the call, and he is a New York Times bestselling author.  So let’s go to the First Match of the Night, and it’s… 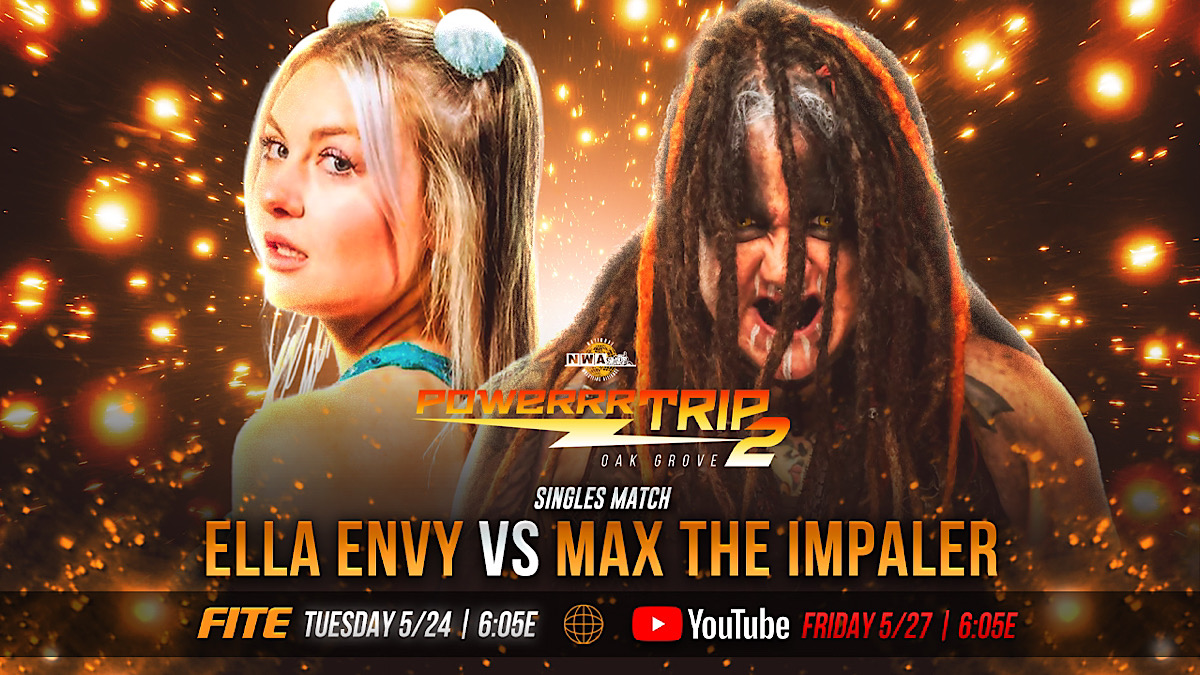 Ella Envy vs. Max The Impaler

If this is your first time seeing Max outside the indies or Ring of Honor, she comes to the ring billed by Davis as the “Non-Binary Nightmare”, and Envy has every right to be concerned.  Envy turns her back and the Impaler attacks before the bell.  On a scale of one to Abadon, I’m here to tell you in the politest way…Envy is royally boned.  Yes, you can feel the squash, as Impaler just overpowers throughout the match.  The Impaler finally puts away Envy with the Welcome to the Wasteland (an over-the-shoulder backbreaker) finisher, and by gods not since Luna Vachon has anyone made me believe they are capable of such destruction.

Your Winner via Pinfall:  Max The Impaler

We go to Kyle Davis with Cyon.  In a promo recorded earlier, Cyon’s thoughts are on The NWA National Title (so…not the NWA Television title, eh?  Okay, then).  Davis asks about his opponent Alonzo, and the Masked One says he’s not on his level.  Davis tries to ask about Austin Idol being his dad, and Cyon grabs him and says never trust him and never speak about Idol again.

(Author’s Note:  Folks, no matter where you land on this storyline, let’s agree on a few things:  At least WWE’s Creative Team is not involved, and Maury Povich is nowhere to be found.  Those things alone are ensuring this doesn’t fall into Botch-A-Mania levels!)

So, let’s head to the next match of the night, and it’s… 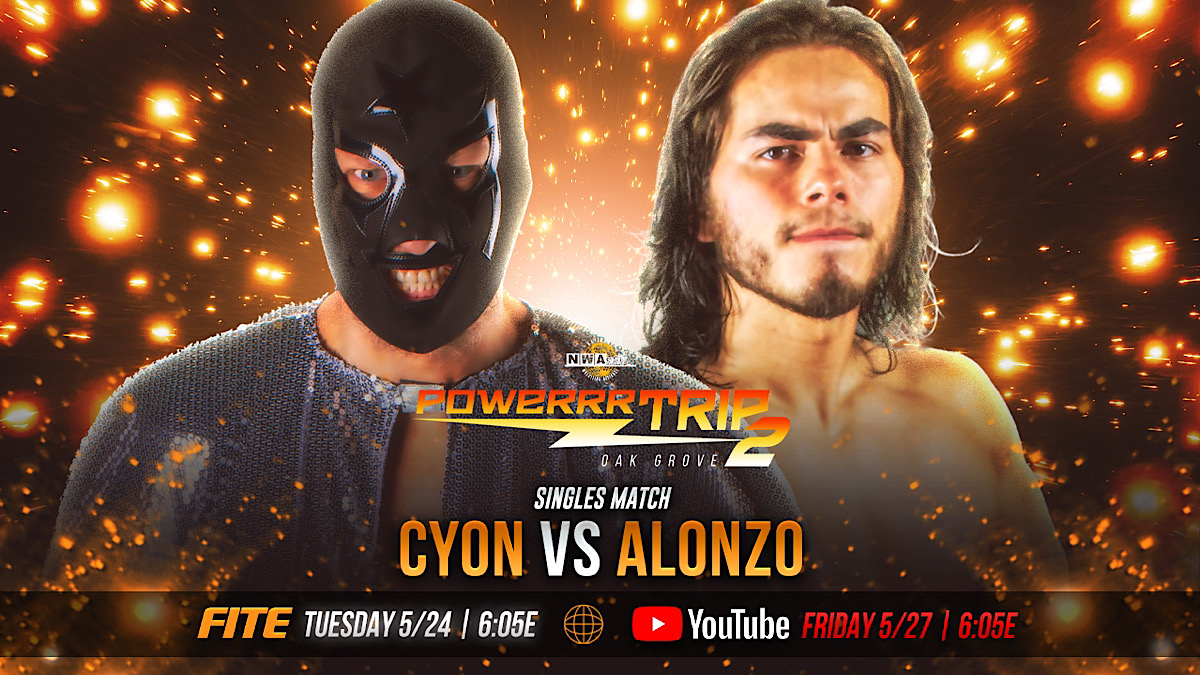 Galli says he and the newcomer Alonzo have been feuding on social media.  Between that and Tyrus’ statement that Austin Idol is a “forthright, god-fearing individual” there’s so much ridiculousness I can stand.

As the match starts, we get a Test of Strength and Alonzo is getting the better of the masked man.  He’s able to counter each move Cyon sends, and the fans are starting to take notice.  Alonzo starts talking trash, but even Tyrus comments that’s a foolish thing to do, showing respect to his adversary.  Cyon hits Alonzo with a monkey flip to the corner turnbuckles, and he turns up the intensity.  Tyrus mentions to his broadcast partners with the line of the night that Cyon “wrestles for an audience of one, and that is Austin Idol.”   Ha!  Shades of Jesse “The Body” Ventura.  Just brilliant.

Cyon goes for a scoop slam to Alonzo and then goes for a vertical suplex for a two count.  He tosses the upstart Alonzo out of the ring and keeps on offense.  After Cyon tosses him back in the ring, Alonzo surprises him with roll-ups and a flying headscisssors.  Now Alonzo drags out the Masked One, then goes back in the ring and lands a tope suicida to Cyon on the guardrails.  Alonzo goes to the well once too often, and he’s caught in a nasty suplex by Cyon to the concrete floor, and Galli says we need to go to…

Ads (I should be annoyed by this as it is one of my pet peeves in pro wrestling.  But I’m letting it slide as we, and the fans, are being treated to a sleeper match for the ages.)

Back to the action, and both men dove into the ring at the last second to break the ten-count instigated by the ref.  Alonzo and Cyon fire shots back and forth.  Cyon hits the ropes and Alonzo nails with a surprise cutter for one, two…kick out.  Now the fans are cheering for Alonzo, as he goes up top for a high-risk maneuver, but he takes too long, and Cyon capitalizes by bringing him down hard with a superplex.  He follows with a buckle bomb to a nasty clothesline that turns Alonzo inside out.  It looks bad for the upstart, but Alonzo hits a surprise Roll of the Dice (Cross Rhodes) to a basement superkick for a two count.  Cyon responds with a pendulum suplex to a surfboard to a slam gets a two count and the DVD for…a kick out at two!  The fans are on their feet as Tyrus rightly remarks that “both these guys are climbing the ladder.”  Cyon goes back with a second DVD, followed by a third that finally ends the match.

Your Winner via Pinfall:  Cyon

Earlier in the day, Jax Dane and Chris Silvio, Esquire talked to Kyle Davis on tag-teaming with “Magic” Jake Dumas against the Miserably Faithful on NWA USA.  Dane and Silvio are both okay with Dumas wrestling with him and riding his coattails since it is his show and that is the Dane Event.

We get a recap of last week’s NWA USA Junior Heavyweight title match with Homicide and BLK Jeez, but catch it here instead, and stay for Gymp-y goodness.

Yes, you read that correctly.

This is the rubber match between both men, as the former champ faced Knox in title competition way back when for Hard Times 2.  Knox is playing around, but Murdoch has a thousand-yard stare burrowing right at his opponent.  There is nothing fancy here as the match is just a straight slugfest.  Murdoch sends Knox over the ropes and both men land hard on the concrete floor.  Back in the ring, Murdoch rushes, and Knox uses the momentum to ram him into the steel post, and the action once again spills out to the floor.

Murdoch goes for a DDT, but Knox escapes right away.  He goes back on the attack and Knox drops his throat on the guardrail to stun the former champ.  He sends Murdoch back in the ring and hits a massive clothesline to cover for a two count.  Knox keeps Murdoch grounded with a headlock sleeper, and the ref checks his arm twice.  On the third time it drops, but Murdoch gets a foot on the rope at the last second.  Murdoch gets back up to a vertical base, but Knox sends him to the ropes, and now he delivers a DDT with an exclamation, as the move took a lot of effort from both men, and they are slow to get back up.  One spine buster later, Murdoch goes up top and tries the flying bulldog, but Knox has it scouted, and he gets his running crossbody for a two count.  He sends Murdoch to the corner and gets a hip attack for a cover that gets another two count. Now Murdoch falls to the Knox Out finisher for the one, two…He kicks out and still has life.  Knox gets frustrated, goes out to the timekeeper’s table, and grabs the ring bell.  He goes to use it on Murdoch but the ref rips away.  Knox tosses the ref, and he has Kyle Davis call the match since the ring bell is indisposed, and…

Your Winner via Disqualification:  Trevor Murdoch

Murdoch manages to get the bell away from Knox and swing at him.  As The Cardona member is feeling good about escaping his fate, Murdoch is looking more focused than in recent months.  The former champ paces the ring as the show goes to credits.

I was ready to write off this PowerrrTrip, and I am glad I didn’t do that.  Max is an impressive specimen in the ring, and Alonzo and Cyon tore down the house.  Murdoch and Knox have the makings of a nice feud or the continuation of their existing one.  Now, what will happen once all of The Cardonas get involved?

We’ll find out together, so see ya in seven!