Sho and Taguchi get crazy at BOSJ 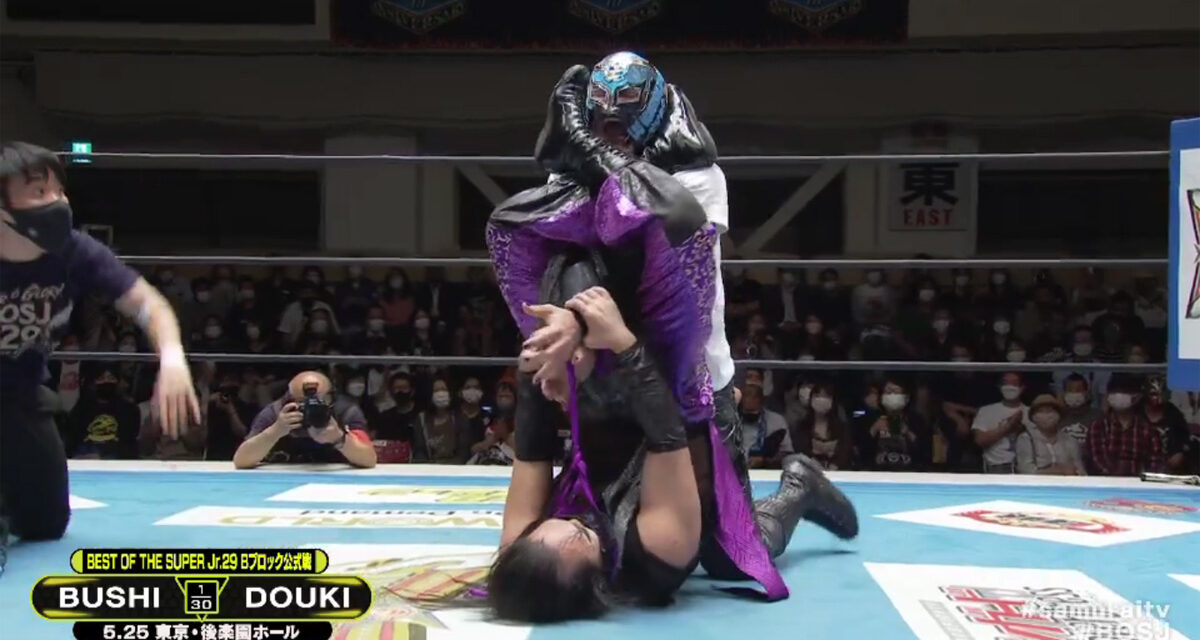 Alex Zayne and Ace Austin weren’t in the main event of night eight of NJPW’s Best of the Super Juniors but they should have been. They were actually in the opening match and I had to feel a bit sorry for anyone who followed them as they put on one of the best matches of the tournament so far.

In the conclusion of their match Zayn went for his Cinnamon Twist splash but Austin crotched him on the top rope.

“One of us has to win!” shouted Austin as ran across the apron of the ring kicking Zayne in the skull. Austin executed a running head scissors by leaping off the apron back into the ring and catching a zonked Zayne. A Fold put Zayne away. 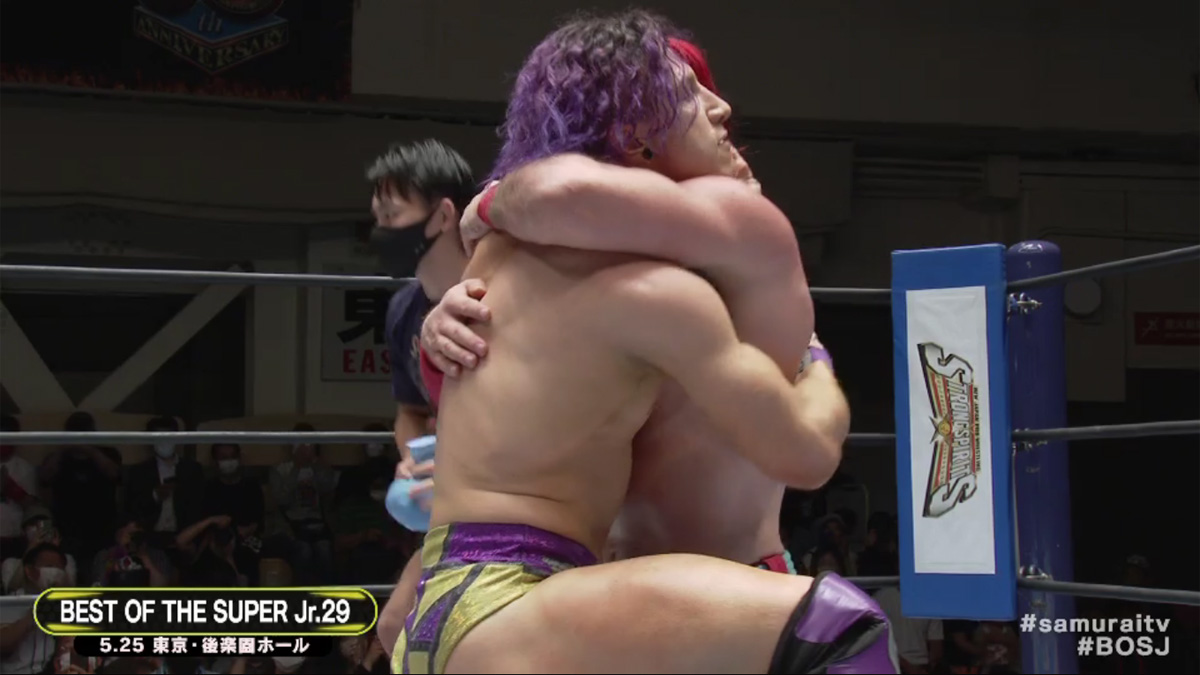 Friends Zayne and Austin hug it out. Courtesy: NJPW.

Austin shook hands with Zayne after the match then the two friends hugged it out.

Sho took on Ryusuke Taguchi in the strangest match of the tournament.

Taguchi comes out wearing a miner’s headlamp. As we know, The House of Torture loves playing with the arena lights very often.

Sho puts Taguchi in a sleeper hold, drags him down the entrance way and through the curtain. As we hear Taguchi being worked over in the back, Sho pokes his head out and laughs.

Sho gets back into the ring trying to hurry the official along with their count. A bruised up Taguchi makes it back into the ring just in time. Taguchi fights back throwing Sho to the floor, wrapping his shirt around his throat and dragging him to the back. With Sho’s legs poking through the curtain as well as Taguchi’s head, Taguchi apparently bounces up and down on Taguchi with his butt. 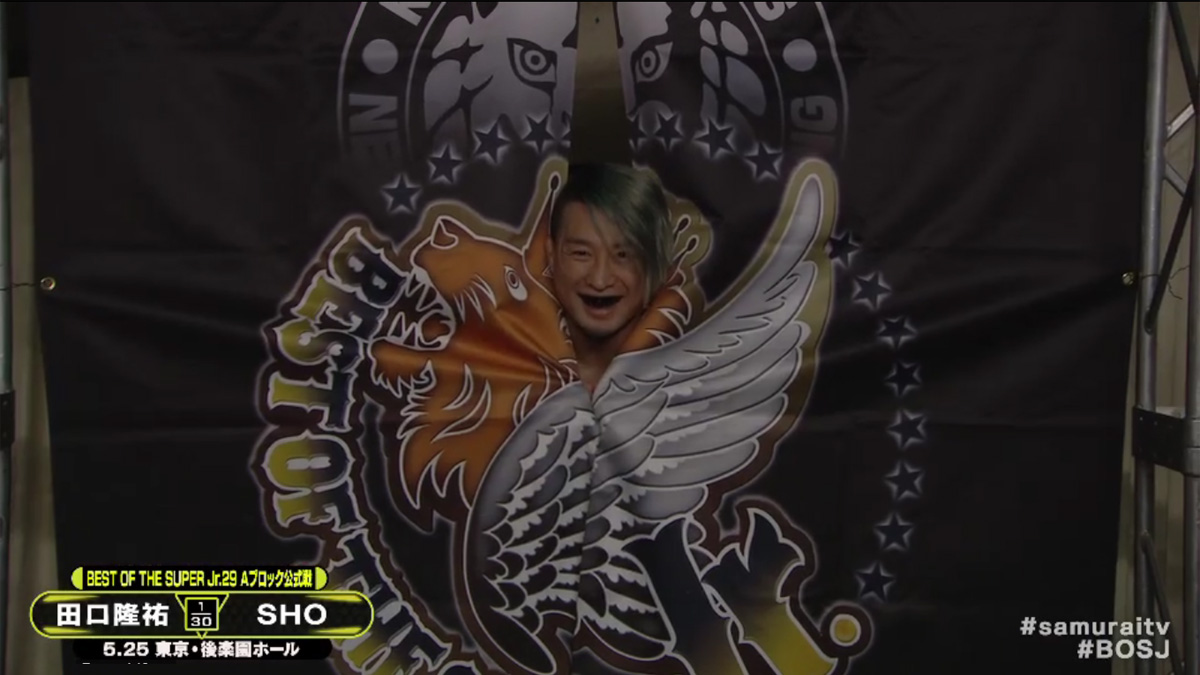 Sho is up to no good. Courtesy: NJPW.

Sho throws the official into a corner. Sho dodges a hip attack and Taguchi bowls over the official instead. Sho goes for his wrench but discovers that Taguchi has replaced it with…a banana.

Taguchi has Sho in his ankle lock. The lights go out. Dick Togo chokes out Taguchi with his garotte but Taguchi turns things around and when the lights turn back on he is rubbing his butt in Togo’s face. Yujiro Takahashi nails Taguchi with his cane. Sho pins Taguchi for yet another tainted win.

The tournament continues on Thursday and Saturday. The finals are on June 3rd.

Alex Zayne versus Ace Austin BEST OF THE SUPER Jr. 29

Bushi versus Douki – BEST OF THE SUPER Jr. 29 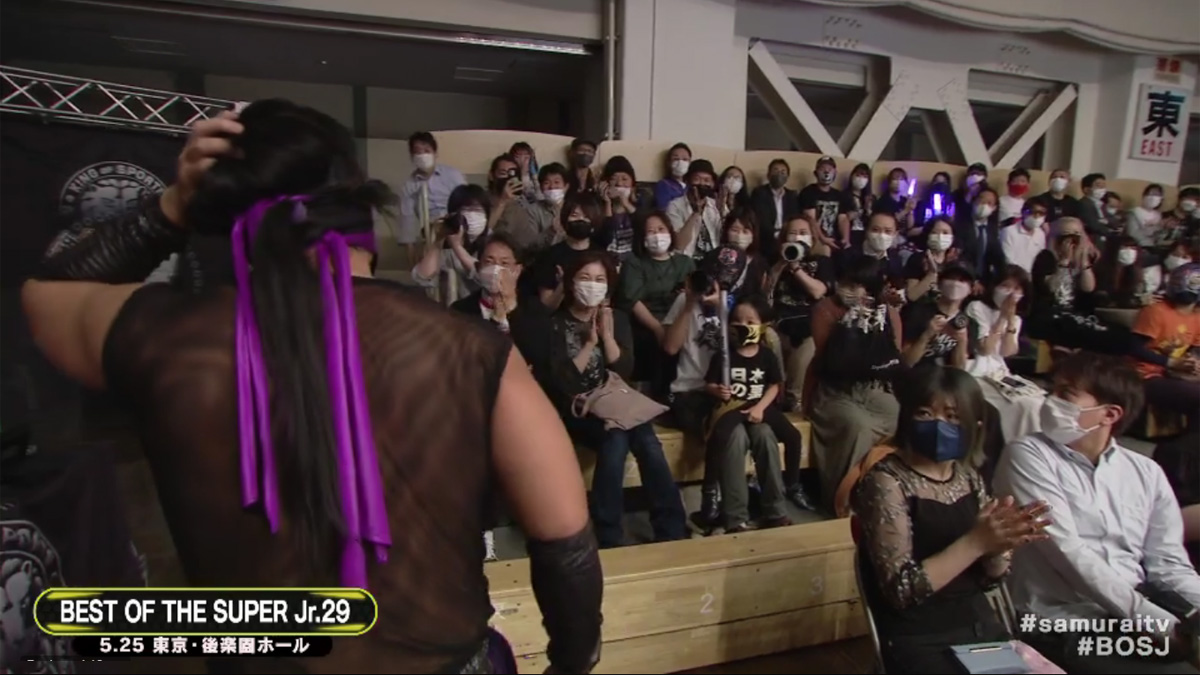 Douki is actually getting a lot of cheers and support from the crowd throughout the tournament and tonight is no exception. Douki catches Bushi coming off the ropes turning his MX into his ‘Douki Chokey’ submission move.

Francisco Akira versus Clark Connors – BEST OF THE SUPER Jr. 29

Connors capitalizes on Akira playing to the crowd with a Trophy Kill.

Titan versus Wheeler Yuta – BEST OF THE SUPER Jr. 29

Yuta wins with the Seatbelt Clutch. He and Titan shake hands after the match.

El Lindaman versus El Phantasmo – BEST OF THE SUPER Jr. 2

Phantasmo fakes a knee injury so he can super kick Lindaman in the face and pin him with a CR2.

Sho versus Ryusuke Taguchi – BEST OF THE SUPER Jr. 29

TJP versus Robbie Eagles – BEST OF THE SUPER Jr. 29

TJP uses the Mamba Splash to set up Eagles for the Pinoy Stretch.

Master Wato versus El Desperado – BEST OF THE SUPER Jr. 29

Taiji Ishimori versus Yoshinobu Kanemaru – BEST OF THE SUPER Jr. 29

Kanemaru counters Ishimori swinging his title belt at him by spitting whiskey in his face. Kanemaru pins him with a roll-up.

Yoh versus Hiromu Takahashi – BEST OF THE SUPER Jr. 29